Foreign policy was high on the agenda of the European Union in 2013. Two high-profile successes – on Kosovo and Iran – lifted the EU’s profile, and demonstrated that the Union can achieve results when member states and EU institutions work together. Yet significant challenges remain in changing European and global milieu. While the economic crisis has made the Union look inward and led to increasing differentiation, ongoing drastic changes in the EU’s eastern neighborhood call for united and effective EU policies. What are the key trends in European foreign policy? What are the implications of increasing differentiation of the EU on its external action? Can the EU rise to the present global and European challenges?

Teija Tiilikainen, the Director of the Finnish Institute of International Affairs, opened the seminar remarking that while the seminar aims to assess the European Union as a global player by looking both back and to the future, it is doing so in the middle of a very difficult European situation where there is a lot of talk about the EU’s ability to promote its goals and values in its immediate neighbourhood. She briefly presented two important publications addressing the EU’s external relations and its capacity to exert its powers in them, ECFR’s ‘European Foreign Policy Scorecard 2014’ and FIIA’s ‘Multi-speed Europe? Differentiated integration in the external relations of the European Union’.

Hans Kundnani, Research Director of the European Council on Foreign Relations (ECFR), in his speech presented the results of ECFR’s annual European Foreign Policy Scorecard, both the most recent publication (2014) and the longer trends visible in the EFP Scorecard research for the past four years. He noted that since most of the foreign policy analysis tends to focus on very specific areas of policy, it is quite difficult to tell a coherent story about the EU’s foreign policy even for one year’s period, let alone for the longer period of post-Lisbon Treaty European Foreign Policy. However, it is useful to try, as the Scorecard does, to think about linkages, comparisons and causalities between different areas of European foreign policy, and thus perceive European foreign policy as a whole.

ECFR’s Scorecard project was started after the Lisbon Treaty in 2009, to annually track the European Foreign Policy performance against the background of the new machinery created in the Treaty. According to Kundnani, in the first and second years that the Scorecard was made, Europe was first distracted and then diminished by the Euro-crisis, and Europe’s responses for example to the Arab Spring was constrained by the ongoing crisis. 2012, the year examined in the third edition of the Scorecard, was a combination of stability and instability, a kind of low point that saw the stabilisation of Euro but also a growing instability in the neighbourhood of Europe. The fourth edition of the publication describes a year of increasing instability in the neighbourhood but also a year of, according to Kundnani, almost historical successes: the breakthrough on Iran and the Serbia-Kosovo deal, both products of hard work over a period of years.

If these four years are taken as a whole, Kundnani identifies five trends as overall conclusions. The first is that the Euro-crisis has weakened Europe, for example through the loss of soft power, through cuts in defence and development spending but also through the internal divide in Europe during the crisis. The second trend is that Europe’s neighbourhood has become more unstable, exposing the limits or flaws of the European Neighbourhood Policy. Thirdly, Europe has become more coherent in its policy towards Russia, although Kundnani mentioned that he himself has started to question this. He pointed out the possibility that the choices faced by Europe had become easier, and now that we have to make tougher choices again, the old divisions might emerge.

The fourth trend, according to Kundnani, is that the European External Action Service (EEAS), has slowly become more effective, at least in some areas, culminating in its role in the successes mentioned earlier. This also suggests that there is a trend towards greater coherence in European foreign policy. However, against the background of crises, there has also been a trend of renationalisation of European foreign policy, as national interests and particularly economic interests have diverged.

Juha Jokela, Programme Director of the Finnish Institute of International Affairs, talked about the phenomenon of differentiation in the EU’s external relations, an increasingly important trend in the European integration and relatedly in European foreign policy. He pointed out that differentiation might be a more permanent feature in European integration, challenging the idea of a multi-speed Europe, the idea of Member States moving towards the same goals but at different speeds. Indeed, the Member States are moving in rather different directions, as the UK’s example demonstrates. Since this differentiation is not merely a question of the EU’s internal functioning, FIIA’s ‘Multi-speed Europe?’ report was produced to map out and analyse the implications of differentiated integration in the EU’s external relations.

Regarding the different fields of the EU’s external policies and the differentiation present in them, Jokela noted that while within the CFSP, a more general ‘integration fatigue’ can be observed rather than a real turn towards differentiation, within the CSDP there can be seen a parallel deepening and differentiation of policies. In the fields of security and defence, there have been significant difficulties in moving ahead within the EU framework, and even though there has been increased cooperation, it has happened in the margins or outside of EU structures. The important question here is, according to Jokela, whether the ‘mini defence unions’ that have formed via differentiation are moving in the same directions or will we witness fragmentation of European defence cooperation.

In the fields of enlargement and neighbourhood policies, Jokela pointed out that it is increasingly difficult for the outsiders to come to terms with the EU’s internal divisions. While it has been argued that differentiation could open up possibilities for some outsiders to attach themselves to the EU overcoming some current difficulties, it could create a sort of second-grade membership status with the EU deciding who can join which circle, which doesn’t necessarily make the Union very attractive to outsiders.

Regarding the economic policy-field, Jokela briefly discussed the possibilities of fragmentation that could follow the more separate euro-area institutional structure within the EU. Regarding the EU’s development policy, he mentioned that it is characterised more by diversity than differentiated integration. Because of the national funding the governments want to control the allocation of money, while they are aware of the added value of EU level coordination. There have not been movements to form circles within the EU that would utilise the tools provided by differentiated integration. Regarding the borderless Europe and the external dimension of the Schengen, further differentiation might occur both in terms of reinforcing EU’s external and internal borders.

While the level of differentiation in the EU’s external relations is increasing, it is still slightly too early to tell conclusively what kind of developments and consequences might occur, because it is still unclear to what extent the EU is moving from a multi-speed Europe to a multi-tier Europe. Jokela concluded his speech by reminding that external developments will undoubtedly shape the EU’s internal developments.

Steven Blockmans, Senior Research Fellow and Head of Unit of the Centre for European Policy Studies (CEPS), began his speech by reminding about the megatrends that the EU is exposed to in addition to trends mentioned earlier: demographic trends, the climate change, the scramble for natural resources, and the decline of Europe’s relative weight in the global politics.

According to Blockmans, to a large extent the EU’s foreign policy is still defined by its geographical neighbourhood. Regarding questioning the EU’s relevance and effectiveness in its neighbourhood he reminded that unlike the US, the EU faces three very volatile areas as its neighbours. The question is can the EU handle these three areas at the same time or should it prioritise? Strategically it is important to note that besides the EU’s values that determine the objectives of the EU’s foreign policy, the interests need to be defended as well. What is needed is a new European global strategy, replacing the outdated and narrowly defined European Security Strategy from 2003. Blockmans also called for a paradigm shift in the neighbourhood policies, with more geopolitical and strategic approaches.

Regarding the eastern neighbourhood, the reactions to the Crimea crisis should, according to Blockmans, be channelled towards re-definition of the EU’s relations with Russia, the biggest and most powerful of its neighbours and nowadays more strategic competitor than partner. He also briefly described the outlooks of the EU’s role, influence and challenges regarding Turkey, the Middle East and North Africa. In short, there is a reset necessary for the European Neighbourhood Policy, using it rather as a toolbox to define relations with each of the neighbouring countries with a value-based approach but also one based on interests of both parties.

Blockmans ended his presentation by pointing out that the EU institutions, including the EU foreign policy architecture that in his opinion has been slowly settling since the Lisbon Treaty, are transitioning this year after the European Parliament elections; and a couple of challenges related to this have to be overcome, meaning the discontinuation at one stage of the chairmanship of the Foreign Affairs Council, handing over the files of the High Representative and continuation of ongoing processes with Iran, Serbia and Kosovo. 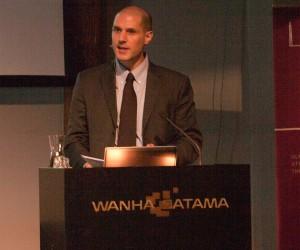 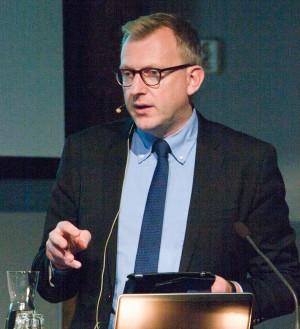 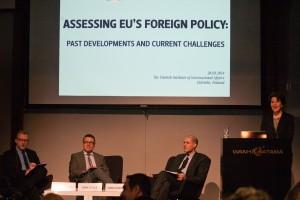 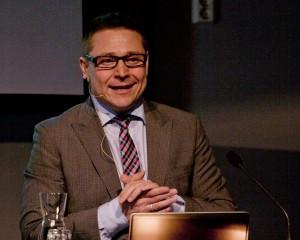