China is gaining prominence in the world at an increasing pace. The establishment of the Asian Infrastructure Investment Bank and the launch of the One Belt One Road initiative are just some examples of China’s growing presence and influence. China’s economic tentacles reach towards the west and south in amongst its neighbours, as well as further north to the Arctic, to Africa and to Latin America. In Europe, China is flirting actively with a group of 16 countries, some of which are EU member states and some are not. Combined with China’s growing military presence overseas, it seems that China is promoting also strategic and not only economic interests through its international activities. The theme ”China outside of China” will be discussed from several angles by prominent speakers.


The seminar will be followed by a networking event for China researchers based in Finland.

Elina Sinkkonen, Senior Research Fellow at the Finnish Institute of International Affairs, chaired the first session of FIIA’s China Research Day 2016, which focused on China’s growing presence and influence in different parts of the world. Sinkkonen presented the speakers and the topics of the day that included China in South Asia, China in Europe and China in the Arctic.

Olli Ruohomäki, Visiting Senior Fellow at the Finnish Institute of International Affairs, presented his analysis on China’s role in South Asia. The relations between China and India are dominated by conflict, cooperation and competition – especially regarding the countries’ security and business interests. According to Ruohomäki, China’s interest in the region relates to security, trade, business and the promotion of stability in Afghanistan and Pakistan. China has an important role in stabilizing and reconstructing Afghanistan through its significant investments in the mineral sector but also in infrastructure. China is also facilitating trade and energy corridors throughout the region. Regarding India’s agenda in the region, he noted that it considers South Asia as its own backyard with a lot of linguistic, cultural and religious ties to the area. With the new policy of prime minister Narendra Modi, India is now pursuing a foreign policy to expand its sphere of influence by building economic ties with its neighbours. From the point of view of South Asian states, China is seen as a counterweight to India and as an attractive economic partner due to the lack of historical baggage. Moreover, Ruohomäki stressed that for Pakistan, Sri Lanka and Bangladesh, China functions as an important investor and contributor to security. China is in a key position to facilitate talks between the Taliban and the Afghanistan government since it can use its influence on Pakistan. Through its massive infrastructure investments in the area, China could contribute to economic growth and therefore also enable political stability. When it comes to trade figures, China is leading India in terms of imports in recent years, but there is a fierce competition between the two over the market place. The Indian Ocean in particular is seen as a strategic area for world trade, where the competition gets tougher and where future tensions might unfold. China and India both have a lot to gain from mutual relations, although unresolved border and security issues might halt the cooperation. In his concluding remarks, Ruohomäki pointed out that China’s role in the South Asian Association for Regional Cooperation (SAARC) could enhance connectivity and further regional integration.

Juha Käpylä, Senior Research Fellow at the Finnish Institute of International Affairs, gave a presentation on China in the Arctic. Käpylä started with an introduction to contemporary dynamics in the Arctic region. Driven by climate change, the Arctic ice cover is reducing at an accelerated pace, and this brings with it new economic prospects (maritime trade, natural resource extraction) and growing geopolitical interest around the world – including in China. According to Käpylä, China started to pay some attention to the region during the 1990s as it joined the International Arctic Scientific Committee, and purchased and converted the Ukrainian ice-breaker Xuelong, or Snow Dragon, into a polar research ship. In 2004 China opened a research station on the Svalbard island. As these examples indicate, Käpylä argued, China’s initial interest in the Arctic was primarily related to scientific research. But Käpylä also went on to highlight that the Chinese focus on the high north has broadened significantly during the last decade or so. China continues to advance scientific research in the Arctic for environmental, food security and soft power reasons. In addition, China is increasingly interested in expected economic opportunities related to the extraction of natural resources (e.g. oil, gas, rare earth elements) and the use of opening maritime routes. For example, China has pursued rare earth elements in Greenland, invested in energy projects (e.g. Yamal LNG) in Russia, and signed a free trade agreement with Iceland. China has also a growing interest in regional governance, characterized by its relatively new status as a permanent observer in the Arctic Council and the acceptance of the UN Convention on the Law of the Seas in the Arctic. In this regard, Käpylä also mentioned a couple of China’s concerns. Firstly, the extension of sovereignty might risk shrinking international seas, and secondly Russia’s control of the Northern Sea Route, including the expensive service fees for ice-breakers set by Russia, could decrease China’s potential commercial advantage in the Arctic. In his concluding remarks, Käpylä claimed that while the Arctic has become a part of contemporary strategic discourse in China, it remains a relatively minor aspect of China’s official foreign policy, and that China’s growing Arctic interests must be understood still as primarily future-oriented.

During Q&A Harri Mikkola, Senior Research Fellow at the Finnish Institute of International Affairs, answered a question regarding the indigenous peoples’ influence in Arctic matters. Mikkola noted that the indigenous people have had a major role in influencing Arctic policies but that there is now a growing fear that they will lose their influence while the region is becoming more and more economic and geopolitical.

Tamás Matura, Founder of the Central and Eastern European Center for Asian Studies, covered two topics in his presentation: the 16+1 Framework and economic relations between China and the Central and Eastern European countries, as well as the key findings of his article discussing political and economic relations between China and the CEE countries. According to Matura, the 16+1 framework provides an annual forum for the Chinese Prime Minister to meet with European leaders, enabling also leaders of smaller eastern European states to meet with him. The framework, functioning as of 2011, is based on fostering regional and multidimensional cooperation. It consists of multiple seminars, conferences and meetings taking place on both lower and higher levels of governance, with the aim of securing better economic relations between China and Central and Eastern Europe. Matura highlighted two key lessons learned from this cooperation so far. In order to comprehend the nature of the cooperation, he noted that one has to realize the two different mindsets between the eastern and the western way of thinking. While the 16 CEE countries have concrete and exact plans to put into practice, China on the other hand works with an inductive logic and wants to see how the cooperation evolves organically. These different approaches create challenges and raise political concerns in the EU, which criticizes the cooperation for not being transparent and productive enough.

In the second part of his presentation, Matura presented the findings of his article which analyzed the bilateral political and economic relations between China and the CEE countries. He found that good political relations with China correlate with investments, which Hungary is a good example of. The reasoning behind this is that Chinese companies use the good relations between the country they want to invest in and their fruitful political relations to Beijing as a sort of guarantee for business. This is also the message Chinese policy makers are enhancing – that geopolitics matter. On the other hand, the political factor has not had a considerable effect on trade between China and CEE countries. During Q&A, Matura stressed that while cooperation on the higher levels might be slower, there is increased cooperation on grass root levels.

FIIA’s Senior Research Fellow Jyrki Kallio opened the afternoon seminar. Postdoctoral Researcher Obert Hodzi from the University of Helsinki addressed the question whether security has become a new phase in China-Africa relations. He noted that China’s first interventions in Africa were based on ideology. Later China started to look for new markets and resources from Africa and the relations became economy-based. Now security issues have become more important, argued Hodzi. China has projected itself as a non-intervention power, and some African countries have accepted China as a trading partner because of that policy, he added. However, security threats towards Chinese nationals and China’s interests have since grown, and China is now facing a dilemma between its non-interfering principle and protecting its nationals and interests. Over the past five years, China’s reactions to armed conflicts in Africa have varied, Hodzi remarked. For example, in Libya we saw an ambivalent China which did not seem to know what to do, whereas in South Sudan China acted more proactively and assertively.  Hodzi added that the interpretation and the implementation of the non-intervention principle have become more flexible. Perceptions of external threats have changed in China, which leads to more intervention. China’s opposition to interventions by Western powers in African conflicts has gradually relaxed, he said.  Hodzi concluded his presentation by noting that China’s new understanding of intervention is one where interventions are conducted through multilateral institutions, sometimes camouflaged as mediation and more often made by consent.

Mikael Wigell, Senior Research Fellow at FIIA, pointed out the geostrategic implications of China’s advance in Latin America for Europe, the United States and the region itself. China’s evolving role in Latin America manifests itself in economic numbers, he remarked. Trade between Latin America and China has increased twenty-fold in the past 15 years, and Chinese investments are growing. The investments mainly focus on construction and infrastructure projects, such as the Twin Ocean Railway over the continent. Wigell noted that China has many motives for this involvement. China needs raw materials and it invests heavily on extracting industries. It also wants to expand its export base and climb up the value-chain, he added. China promotes the internationalization of its engineering and construction corporations and tries to find ways to bolster its own currency. Latin American countries are also being offered economic incentives to cut ties with Taiwan. In addition, China forms political alliances in Latin America in order to counterweight the United States and balance its power in a subtle manner. China’s infrastructure projects in Latin America have altered the strategic geography of the continent and advanced intra-regional trade, said Wigell. It also gives opportunities for countries to pursue greater autonomy from the United States and to set up regional institutions, supported by Chinese loans and investments. He summed up that the political and economic influence of Europe has been marginalized in Latin America. China’s projects should be considered not only economic but also political acts, he said.

The floor was then opened for questions. To the question whether China could try to have political influence over Latin American countries, like they have had in Africa, Wigell noted that China would be much more careful in interfering in the traditional ”backyard” of the United States. He noted that China tends to deal with Latin American countries on a bilateral basis which creates asymmetric relations where smaller countries do not always have the opportunity to resist undesirable developments. Hodzi added that China has more money to offer than its European counterparts, and it deals with all kinds of regimes. This can prolong conflicts, and for example South-Sudanese state actors have used China to extract raw materials and made politicians benefit from the conflict. Hodzi also noted that China’s presence in Africa has made the continent more important to the United States. 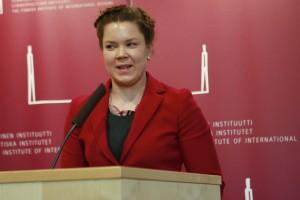 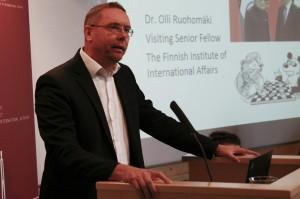 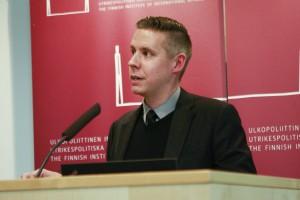 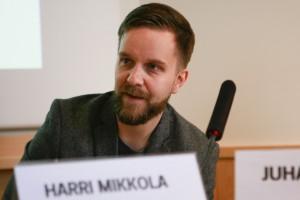 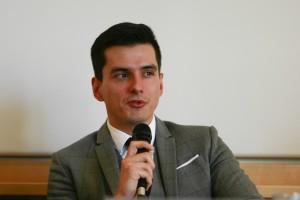 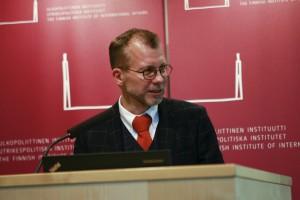 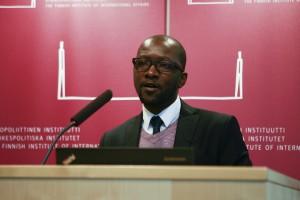 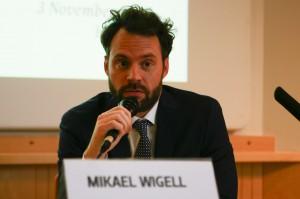