On May 27, 2008, with the Beijing Olympic Games around the corner and only weeks after the devastating earthquake in southwest China, a timely seminar on the challenges that the People’s Republic of China faces as host of the next Olympics was held under the auspices of FIIA. The session was chaired by Prof Raimo Väyrynen with presentations given by FIIA senior researchers Ms. L. Jakobson and Dr M. Nojonen, as well as Prof Zha Daojiong of Beijing University.

The seminar proved a significant contribution to helping dispel misconceptions and foster balanced perceptions of perhaps the most heatedly debated actor on the international stage these days. Increasingly self-confident yet equally vulnerable, China generates mixed sentiment and presents a profound diplomatic challenge by drawing a line on issues like civil liberty and democracy. The Chinese government continues to give national unity and the legitimacy of Communist Party priority in considerations. Indeed, this is where many of the conflicting views surrounding the Olympic Games spring from.

Addressing the political implications of the Olympic Games, Ms. Jakobson began by underlining China’s volatile state of affairs, as exemplified by international uproar and controversial media coverage over the Tibetan issue on the one hand and unprecedented sympathy for the victims of the Sichuan earthquake on the other.

Contradictions will nonetheless persist as long as there is a dichotomy between how the Chinese perceive their country and how the rest of the world views it. Whereas other countries may see the Beijing Olympics as an initiation rite to certain international standards, the Chinese government is primarily committed to meeting domestic expectations and gives boycotting statesmen abroad far less attention than potential discontent or political unrest at home. Much of the Communist Party’s legitimacy rests on vows to restore China’s sense of self after a century of subjugation from foreign powers since the late Qing dynasty. The Olympics, too, should be seen in this light.

Hosting the event makes China susceptible to a broad range of criticism, of which the kind that checks the Chinese government’s accountability may be welcome. Attempts to turn the games into a vehicle for promoting parliamentarianism or other political agendas are not warranted, however. The bureaucracy still has the power to stall political change.

Dr Nojonen offered insight into the economic implications of the Beijing Olympics, which he sees as the first mass-movement since Mao’s days. The event is raising spirits in the capital while rural areas face continued hardship. Hosting the games is significant not only for its symbolic value and the spiritual boost it offers, but also offers businesses considerable marketing opportunities.

The Beijing Olympics have managed to attract major private sponsors, but China’s turbulent political climate has caused foreign companies to make investment decisions at a very late stage. The games could offer largely unknown Chinese corporations a window to international recognition, yet many are wary of marketing themselves abroad due to China’s changeable political image. At home they market themselves with an emphasis on national identity, whereas on the international stage they strive to appear as neutral global players.

However, Olympic hosts are prone to suffer from economic downturn in the wake of their games. Profitability of the event itself is another source for concern as expenses for Beijing 2008 have reached 48bn euros, nearly double the 26bn limit set in 2004 and equalling some 2% of China’s GDP. Sichuan’s earthquake has allowed China to show a humane side of itself, but the catastrophe will give China’s economy another big dent.

Speaking of the Beijing Olympics on behalf of scholarly Chinese, Professor Zha concurs with the previous speakers that holding the games may be seen as a landmark for modern China on a path to consolidating its position as a player on the global stage. Nonetheless he laments the organisers for going over the top in arrangements, costing China a vast amount of effort and resources.

Considering the Beijing Olympics a success would entail avoiding domestic or international tumult and smooth operation of services for guests and participants. China faces a challenge with the 33,000 reporters it invited to the event, as over half of them are covering issues related to matters other than sports and their lack of expertise in Chinese affairs raises concern. Insufficiently informed coverage over Chinese affairs and potential bias against the organisers may cause ill feelings on both sides.

Civil protests abroad over China’s human rights record, Taiwan or relations with I”rogue” states come as no surprise to the Chinese, but foreign countries raising these topics in their diplomatic agendas is upsetting. Consistency and outspoken policy is a prerequisite for workable relations with China – other countries need to be explicit about where they stand on Tibet, for instance, the way Washington has been on the question over Taiwan’s independence. Furthermore, governments need be aware of how NGO activities may interfere with prudent diplomacy.

Questions and comments from the floor

The seminar’s audience represented a wide array of people, ranging from scholars in various fields to politicians and diplomats. Questions concerned whether China’s sudden turn from victimiser (referring to the clampdown on riots in Tibet) to victim (after the earthquake) in the foreign media is reflected in how the Chinese themselves view their situation, and whether the earthquake has dampened the nation’s enthusiasm for its impending Olympic Games. While hosting the event remains a matter of pride and joy for most Chinese, Professor Zha emphasised that the Olympics will come and go, and both he and Ms. Jakobson suggested that more stable relations with China require that sentiment towards China was not dictated by isolated or transient incidents. Another question asked why the Chinese leadership makes such a fuss about western politicians befriending the Dalai Lama even though this practice tends to smack of electorate appeal and hardly warrants an impact on actual relations with China, but Professor Zha dismissed such politicised stunts as irresponsible, adding that the Dalai Lama deserves little credit as a politician.

Another query concerned what role the Shanghai World Expo will play after the Beijing Olympics are over Another one touched on health issues and reports of organ harvesting in China, which the speakers found to boil down to plain and simple poverty and Dr Nojonen pointed out the sad fact that organs are for sale in response to demand. On a more positive note, the panel spoke of a growing awareness of green values in China in response to a question about the Beijing Olympics impact on the city’s deteriorating environment. 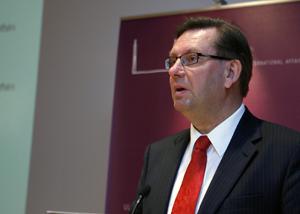 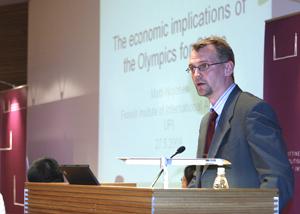 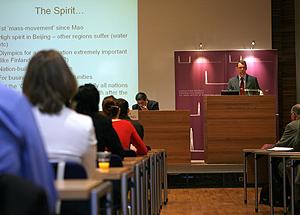 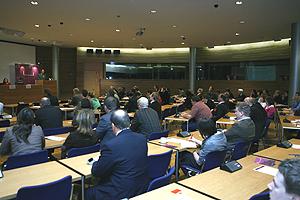 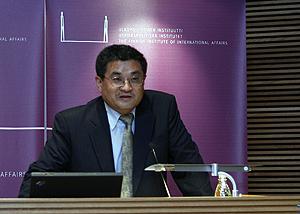 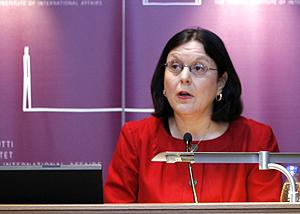