etusivu / Tapahtumat / China’s Rise and the Future of the Korean...
jaa
jaa

This seminar will focus on the rise of China from the perspective of the Korean peninsula, and explore the options for South Korea’s strategic choice. Is China’s rise real or fictional, and how is it perceived in South Korea? How would China’s ascend affect the future of the Korean peninsula? What is the nature of the current discourse on strategic choice? Of balancing, bandwagoning, standing alone, maintaining status, and creating a new order, which one is the most likely and desirable choice?

Moon Chung-in is Professor of Political Science at Yonsei University and Ambassador for International Security Affairs at the Ministry of Foreign Affairs and Trade, the Republic of Korea. He served as Dean of Yonsei’s Graduate School of International Studies and as Chairman of the Presidential Committee on the Northeast Asian Cooperation Initiative, a cabinet-level post. He has published over 40 books and 230 articles in edited volumes and such scholarly journals asWorld Politics, International Studies Quarterly, and World Development. He was also appointed as a member of president-elect Roh Moo-hyun’s high-level delegation to the U.S. in 2003. Professor Moon has been a Fellow of the Woodrow Wilson International Centre in Washington, D.C.

In addition, Professor Moon will hold a lecture ”Regime Dynamics in North Korea and the Future of Inter-Korea Relations” on Thursday 22 May 10:15-11:45 at the University of Helsinki (Unioninkatu 37, Seminar room 4). No registration required.
Summary of the seminar:
The seminar was opened by its chair Dr Mika Aaltola, who welcomed the speakers and the audience and stressed the significance of the topic. He also mentioned that the Institute has concentrated on this topic lately.
In his speech, keynote speaker Professor Moon Chung-in focused on China – South Korea relations. According to him China is important for South Korea because of the history and the balance of power. China is also directly involved in the Korean Peninsula conflict.  China’s rise as a major trade power has made South Korea more dependent on trade with China. Prof. Moon furthermore noted that the development of China-US relations has an effect on South Korea.
Prof. Moon posed the question whether China’s rise is hegemonic. To know if the rise is hegemonic, national capability, China’s intention and the political will of leaders have to be considered. National capability informs us if China is really able to compete with the US in terms of power. All aspects of power need to be taken under consideration: hard power, soft power and smart power. Hard power is, for example, economic power and military power. In Prof. Moon’s opinion China can beat the US in size of economy in the near future, but not in GDP per capita. However, in terms of military power, China is not able to outdo the US. In terms of soft power, Prof. Moon was skeptical of China surpassing the US. Smart power may be in China’s favour, but in general, Prof. Moon doubted that China could do better than the US in terms of power.
What about China’s strategic intentions and the political will of leaders? According to Prof. Moon, China’s intention is a peaceful rise alongside peaceful development. The purpose is to build a satisfactory society for people, achieve external peace with neighbouring countries and internal social harmony. China pursues sustainable economic development; democracy and domestic issues are its priority, not foreign issues. Of course, there are other options for strategic intentions, but in Prof. Moon’s opinion China pursues peaceful development. In terms of intentions, Prof. Moon’s opinion is that China’s rise is not hegemonic.  In his view there have been only two true leaders in communist China: Mao Zedong and Deng Xiaoping.  Leaders after these two have been bureaucratic and preoccupied with domestic issues and unable to concentrate on the issues at the global level. This means that there is no political will for a hegemonic rise.
According to Prof. Moon, the rise of China will lead to Finlandisation of South Korea and South Korea is not happy about this. There are three approaches to responding to this. South Korea could establish an even stronger bond with the US and search for other allies who share similar values. Another approach is to support the view that the US is a declining hegemonic power, so a more reasonable option – also in view of history – would be to pursue a strong bond with China, because in the near future China will be a regional hegemonic power.  The third option is to maintain the current approach: economic benefits from China and military benefits from the US, without choosing between them.
Dr Jyrki Kallio commented on the speech of Prof. Moon by focusing on North Korea.  North Korea’s irrational regime is the reason why North Koreans have to live in inhumane conditions. Opening up to China’s regime would be suicidal for this regime, and actually China has very little weight in North Korea. China’s goals in the Korean peninsula are: no war, no chaos or nuclear power in the Peninsula. China also pursues economic growth, balance and stability in the area. A treaty between China and North Korea, in which mutual assistance is agreed upon, exists and this treaty also includes a military element. However, China would probably not interfere militarily in North Korea.
China is the main supplier for food and energy in North Korea but has not as big a role as the Soviet Union had. North Korea has never been self-sufficient. This may lead us to think that China’s influence and actions in North Korea are exaggerated. The West assumes that China would support economic sanctions towards North Korea, but China is actually in favour of the status quo. However, the questions are: how long can the status quo remain and what will happen eventually in North Korea?
The seminar ended with questions and comments from the audience. 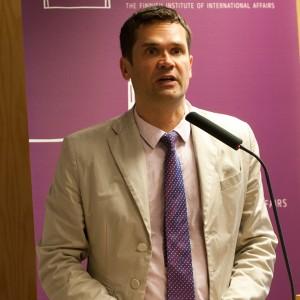 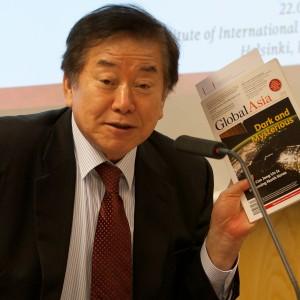 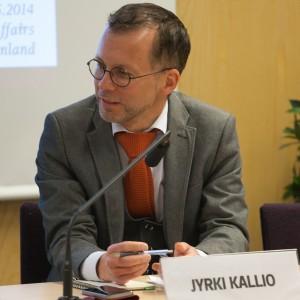