The two year negotiating process form Bali to Copenhagen exposed some of the most interesting emerging power dynamics of the 21st century. As immediate emotions have faded, space is opening for more measured and systematic reflections on the lessons of the multilateral climate process and the especially Copenhagen COP-15. A fundamental issue is the current state of the G77 and China block of developing countries; its growing differences, and sources of solidarity. How does the G77 function in the 2010 climate talks? What are the strategic implications of the new G77 dynamics to parties such as the EU?
PROGRAMME
9:00 Welcome Address
Anna Korppoo, Programme Director, Finnish Institute of International Affairs
9:00 – 9:30 Climate Negotiations: State of Play
Sirkka Haunia, Principal Negotiator, Finnish Ministry of the Environment
Haunia is Head of the Finnish delegation to the UNFCCC negotiations since 2008.
9:30 – 10:00 Balancing Act: China’s Role in Climate Change
Karl Hallding, Head of China Cluster, Stockholm Environment Institute
Hallding leads Stockholm Environment Institute’s China Cluster and has extensive experience in co-operation with China on environment and sustainable development issues since the mid 1980s.
10:00 – 10:30 G77 and China: Post-Copenhagen Symptoms
Antto Vihma, Researcher, Finnish Institute of International Affairs
Vihma is completing his PhD on the questions of effectiveness and legitimacy in global climate governance. Mr Vihma has a special interest in the UNFCCC negotiations, which he follows closely.
10:30 – 11:30 General debate and conclusions
The seminar marked the launch of Briefing Paper 62 by Antto Vihma:
Elephant in the Room – The New G77 and China Dynamics in Climate Talks

Anna Korppoo, Director of the Programme on the International Politics of Natural Resources and the Environment at the Finnish Institute of International Affairs, chaired the seminar. Dr Korppoo warmly welcomed the audience before pointing out the poignancy of the topics of the speakers.

Sirkka Haunia, Finland’s lead climate negotiator from the Ministry of the Environment, gave the opening presentation. She began by giving a brief history of the climate negotiations under the UN Framework Convention on Climate Change, from its establishment in 1992 to last December’s UN Conference of the Parties 15 in Copenhagen (COP15). Significantly, the summit came around very quickly with regards to the US presidential elections and indeed there was not enough time for US legislation on energy and climate to be passed, which impacted negatively on the summit.

The result of COP15 was the Copenhagen accord, a non legally-binding text that met late-night obstruction from some parties, but was nevertheless a step forward. Now there are economy-wide targets for developing countries, progress on financing and monitoring.

On the outcomes of Copenhagen, Ms Haunia noted REDD+, concerning emissions from deforestation, as very significant. Alongside this, financing of climate actions took a step forward, as $ 30bn ‘fast start’ financing was promised, with € 7.2bn from the EU. In the long-term $ 100bn a year is to be made available to developing countries by 2020, conditional to meaningful mitigation action. From the EU perspective, with global targets set for 2020 or 2050, the talks were underwhelming. Whilst there are no big expectations for the Cancun climate conference, there are keys issues in the future of the Kyoto Protocol, as well as the aforementioned REDD+, adaptation, technology transfer mechanisms, and possibly governance of financing.

Next, Karl Hallding, Head of the China Cluster from the Stockholm Environment Institute, took the floor to give a presentation: ‘A balancing Act – China’s role in climate change’. He began by stating that China’s perception of and approach to climate issues was essentially balancing internal issues. It is oft-reported that China is the world’s biggest polluter. In terms of CO2 emissions this is now true, being responsible for almost 25% of global emissions, and around 50% of the increase in emissions since 1990. Yet, it can be claimed that China is doing more than any other country, including the target of a 20% reduction in energy intensity across 2005-2010, as part of the 11th Five Year plan. If this target is met, it will equate to 1.5Gt of CO2 avoided by deviation from ‘business as usual’. This would be the biggest avoidance from one single policy.

China is faced by three fundamental problems: increasing population putting strain on arable land, water and natural resources; rapid economic growth meaning the increasing consumption of resources; and the fast transition from socialism to capitalism, in which the prices of some things are too low i.e. energy and water. However, there is a belief and drive to make things better for future generations.

At Copenhagen, the gathering of world leaders demonstrated that climate change is not a purely environmental matter, but one of great geopolitical importance. President Obama tried to twist the perception of the issue from that of emissions to jobs. In order to engage and push for a more ambitious deal, the US needed a signal from China that would take on some of the burden. Indeed, Chinese targets are extremely ambitious, certainly against ‘business as usual’ scenarios. As China is dependent on imports for 50% of its oil, these energy targets are simply a security issue. Energy security issues threaten the Chinese project, national stability and the Chinese government. At the same time, China also wants to be seen as a responsible global actor, especially on matters of energy security, nuclear non-proliferation, and so on.

In sum, Mr Hallding stressed that China was relatively vulnerable to the effects of climate change. In light of this, China’s climate actions are policies it will undertake voluntarily.

Antto Vihma, researcher at the Finnish Institute of International Affairs, gave the third and final presentation on the climate negotiating group known as G77 and China. Mr Vihma addressed the rise and importance of this group, as outlined in his recent publication: Elephant in the room: The new G77 and China dynamics in climate talks.

Mr Vihma set out that commentators and negotiators could learn from history – the developments of Copenhagen certainly did not come out of the blue. The G77 was a product of the political economy and the North-South divide. In the early post-colonial and Cold War years, the 1955 Bandung conference and UNCTAD were significant developments and precursors to the G77/China, itself consisting of a number of sub-groups. The key trends for climate negotiations have been the rise of BASIC (Brazil, South Africa, India and China), which came as a surprise to some experts and diplomats; radicalisation in climate agenda, such as the obstructionist actions of Sudan and socialist agenda of the ALBA members (Bolivarian alliance of Latin American countries, of which Venezuela, Bolivia, Ecuador, Cuba and Nicaragua coordinate climate change positions). In Copenhagen, G77/China was initially against the Copenhagen Accord, giving way to a more ambivalent attitude, with China and India notably having issues with international monitoring and reporting of climate actions.

Strategically, in the wider context of the climate talks, the US is continuing on a fundamentally unilateralist strategy, whilst China revealed its strategy and ‘internationalisation’ of climate actions is not there – with clear signs of obstructionism at Copenhagen. Mr Vihma also asserts that it is clear that the EU is not a last minute deal-breaker, but an agenda setter nonetheless.

In the Q & A section, Mr Hallding was first asked what China was willing to do to combat and mitigate climate change. In response, he said that China is interested in any policy that can help lower its energy intensity, including carbon market experiments, notably in Tianjin.

When asked about Russian activities in the talks, the Chair responded by stating that Russia seems to have taken a backseat, whilst currently working on domestic energy policies. A question on the events of Copenhagen probed for an interpretation of why the emissions targets for 2020 and 2050 disappeared. Somewhat diplomatically, the panel noted that the only US – China negotiation correlated with the disappearance of these numbers. 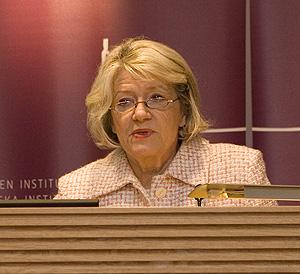 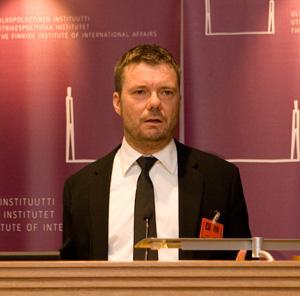 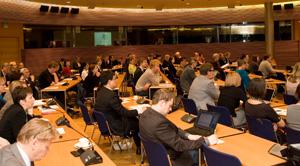 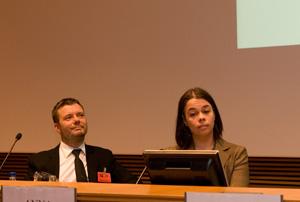 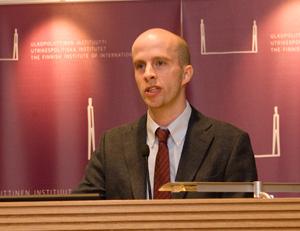