etusivu / Tapahtumat / Colombia’s Peace Process: Perspectives for...
jaa
jaa
Colombia is at a crossroads and 2014 will be a pivotal year. After three years of peace negotiations
with the FARC and with upcoming legislative and presidential elections the country is set to
lay the foundations for its future – for better or worse. The seminar will examine different
electoral scenarios for the country and how these might shape the progress and the eventual
implementation of a peace process. It will also explore what a peace agreement between the
government and the FARC is likely to look like, what changes it will bring about and what new
challenges and opportunities will emerge. Against this background, the seminar will reflect upon
some of the new and emerging issues that will affect Colombia, from economic development,
infrastructure gaps and political institutions to grassroots movements and social unrest.
Keynote speaker:
Daniel Linsker, Vice President, Control Risks Americas
Chair:
Mikael Wigell, Senior Research Fellow, the Finnish Institute of International
Affairs
Summary of the seminar:
The seminar´s purpose was to analyse the current and prospective developments in Colombia in 2014, especially in terms of the legislative and presidential elections and their implications for the ongoing peace process. The event was opened by short welcoming remark of its chair Dr. Mikael Wigell.
The keynote speaker of the seminar Daniel Linsker, having experienced the situation in Colombia from a personal, academic and political perspective, claimed that the elections in 2014 will be ”incredibly important but at the same time incredibly boring”, since the re-election of the incumbent president Juan Manuel Santos seems more than likely. However, this is not due to a sound level of public support for Santos but rather because of a lack of serious alternatives. Hence around 30 percent of the electorate plans on casting a blank vote to express their discontent with the country’s political elite in general.
A similar development had just been experienced at the legislative election held on the 9th of March 2014, which raised concerns about legitimacy due to a remarkably low turnout of around 40 percent including 5 percent blank votes. Dr Linsker explained the results with an increasing alienation of the political class from the Colombian society. He also explained that political parties are seen as collectives of individuals and therefore are not capable of channelling and expressing public demands. This situation is even more alarming because it makes voters receptive to charismatic populist leaders. Furthermore, the result of the congressional election will also have an impact on president Santos’ prospective second term, due to a loss of power for his party. Considering the strong position of the congress in Colombia’s political system, this development will possibly delay or impede some of president’s reform projects. The expected stagnation might be exacerbated by an economic slowdown which is likely to happen in the near future.
Based on these observations Dr Linsker turned his attention to the peace process in Columbia. The dominant debate is currently dealing with security improvements which are actually prevalent although not clearly visible. Thus, it is likely that a peace agreement between the Colombian government and the FARC, as the most influential opposition group, will be reached soon. The most apparent impact deriving therefrom is that the FARC will cease to exist as a political movement having lost its legitimacy, which causes the need to demobilize around 4000 fighters. A major problem in this sense is the call for an amnesty for both sides, which is seen as almost unavoidable in order to reach a peace agreement. However, publicly this is widely considered as unacceptable and could also cause problems due to the legal framework for punishing severe human rights violations provided by the ICC.
Apart from that, a peace arrangement is connected with positive expectations about the normalization of the country, even though it will not end all security problems but rather transfer them from the national to the public security level. Furthermore, the end of the conflict, which dominated Colombia for decades, will cause a shift of public demands towards issues like a comprehensive health system, high quality education as well as a fully developed infrastructure. Most fundamental issues are the so called five engines of growth, namely infrastructure, innovation, the agricultural sector, mining and energy. Although Dr Linsker considers these notes of normalization of the country as a positive sign, the perceived alienation between society and the political class shows that new challenges arise on the Colombian agenda.
In her comments Dr. Elisa Tarnaala emphasized that the conflict in Colombia which might look simple at the first glance, actually offers a lot of interesting and profound insights in peace and conflict resolution. In reference to Dr Linsker’s remarks she focuses on four crucial points. In terms of the peace process she firstly mentions the essential importance of the end of political violence, even though criminal violence might still be persistent. In an ideal scenario, the extreme right and the extreme left groups are both represented in congress, reaching political compromises peacefully. Secondly, Dr. Tarnaala identified the transformation of the countryside as a crucial necessity for the near future in order to increase the productiveness of the agrarian sector. Furthermore, it is pivotal to create a basis for a more centrist consensus in terms of decision-making, which includes that social protest is seen as a normal mean in the political process. Deriving from that Dr. Tarnaala finally claimed the need for several big structural reforms that will within a short time reach the top priority of the agenda as soon as a peace agreement is settled.
After some brief approving remarks from Dr. Linsker on these thoughts, the floor was opened for comments and questions from the audience. In the following lively discussion issues like for instance the role of Finland in the Colombian peace process, the implications of an expected amnesty in reference to the ICC as well as the post-conflict framework in terms of violence against women and children were addressed. 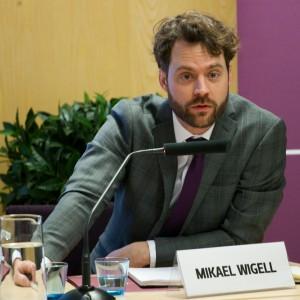 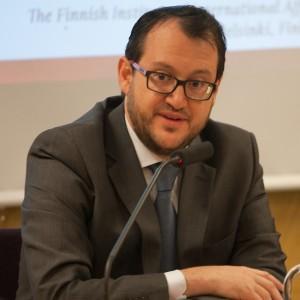 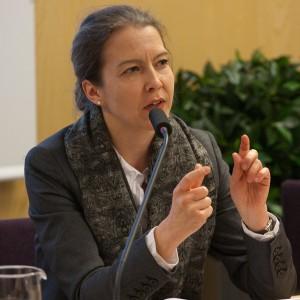