etusivu / Tapahtumat / Conflict and the Redistribution of Power
jaa
jaa

Although it is fashionable to talk about the return of geopolitics, it is more accurate to describe power as becoming more diffuse. This redistribution of power is one of three factors that are redefining security today. The other two are the world’s increasing connectivity and the decline of the state as the centrepiece of the international system. Jean-Marie Guéhenno, President and CEO of the International Crisis Group, suggests that while all three present immediate challenges to the international community, today’s conflicts demand an engagement that is both more modest and more imaginative than in the past.

Jean-Marie Guéhenno is president of the International Crisis Group. Previously, he was the Arnold Saltzman Professor of Professional Practice at Columbia University and the director of its centre for international conflict resolution (School of International and Public Affairs). He is also a non-resident Senior Fellow at the Brookings Institution. He has also served as deputy joint special envoy of the United Nations and the Arab League for Syria and as the United Nations’ Under Secretary-General for Peacekeeping Operations.
Javier Solana, President, ESADE Center for Global Economy and Geopolitics
Javier Solana is president of ESADE Center for Global Economy and Geopolitics, and distinguished Fellow at the Brookings Institution. He is also senior fellow at the Hertie School of Governance, chairman of the Aspen Institute Spain, honorary president of the Centre for Human Dialogue, and advisor to the Institute of Modern International Relations of Tsinghua University. He is also member of the board of the International Crisis Group, the European Council on Foreign Relations, and Human Rights Watch. From 1999 to 2009, Dr. Solana was Secretary General of the Council of the EU and High Representative for Common Foreign and Security Policy of the EU; and from 1995 to 1999, Secretary General of NATO. Prior to this, he has held several ministerial positions in the Spanish government.

The seminar was opened by Mika Aaltola, Programme Director at the Finnish Institute of International Affairs, who introduced the topic and the distinguished speakers.

In his keynote speech, Jean-Marie Guéhenno, President and CEO of the International Crisis Group, emphasized that the world has changed from the times of the Cold War. He noted that most people do not see the Ukraine crisis as a central crisis that will change everything, but instead they want to distance themselves from the crisis. Europe is no longer seen to be the strategic epicenter of the world, even though we should understand that what happens in Europe has also global effects. As power has become more diffused, Guéhenno thinks that countries now matter in different ways. The emergence of regional powers creates imbalances, as some countries that might not have global reach can still have strong and influential regional interests. This complexity makes peace resolution difficult. According to Guéhenno, the world has become more flexible, as for example Russia, in spite of confrontation, still cooperates with other countries in UN peacekeeping. He emphasized also the rise of weakly or uncontrolled spaces, meaning that some states are not able to control their borders and territories effectively. Local grievances and divisions can provide ground for transnational terrorist groups to grow, as has happened in Libya and Mali. According to Guéhenno, if Ukraine had been a stronger state, it could have tackled the grievances in Eastern Ukraine more easily. Connectivity in the world has risen, and local actors now have global significance. Guéhenno believes that we live in critical times, where we see traditional and non-traditional threats combining. That means that we have to be prepared for new kinds of threats and find a path between excessive optimism and pessimism. He emphasizes that our goals must not be over-ambitious, and we should not only rely on force, but it should be used if other means fail.

The second keynote was delivered by Dr. Javier Solana, President of the ESADE Center for Global Economy and Geopolitics. He noted that the world has become more multipolar than ever. He regretted that the institutions which were established in the 20th century have not adapted to changes and are now incompatible with each other. Even though the international community has been aware of the need to adjust the institutions, nothing has been made to develop them. For example, the newly established Asian Infrastructure Investment Bank is a sign that the already existing institutions were not sufficient in order to develop Asia. Dr. Solana also emphasized that the world has become very interdependent, and for example in today’s globalized world ISIS brutalities can have effects on the re-interpretation of self-defense in Japan’s constitution. Energy markets are also developing and as the U.S. has become almost self-sufficient in energy, it does not have as much interest and necessity to defend the Middle East anymore. In addition, climate change must be solved at the global level. In order to face new challenges, we need to adjust our existing institutions and develop the instruments of governance.

After the keynotes, the floor was opened for questions. The first questions dealt with the benefits of the comprehensive approach of the EU in conflict resolution, the ways the EU could sustain its power in a complex world, and with values and the need to update the institutions. Dr. Solana reminded that the EU has played an important role in conflict resolution, and it has been a cooperative entity and one of the few areas in the world after World War II which has not witnessed conflicts within its borders. The best way to sustain the EU’s position is to keep ourselves united. When it comes to values, we must learn to live side by side and respect others. Guéhenno noted that the comprehensive approach is good, but it should not be used as an excuse for inaction. However, theories of comprehensive approach do not matter if we do not have resources. He also thinks that we must be proud that the EU has succeeded in bringing peace to Europe. The EU’s accomplishments must be made visible to its citizens. He noted that the EU is about values, and we must ‘clean our own doorstep’ before lecturing others. A second set of questions dealt with the unpredictability of world politics, rebuilding European security and reasons behind the Ukraine crisis. In his answer Guéhenno remarked that the OSCE may have lost its opportunity to engage Russia after the Cold War, but it still has potential as an organization and it could give Russia a position, but within a rule-based order. He also made clear that Russia’s actions in Crimea and in Eastern Ukraine have been violations of international rules. International peace and order should be seen as a global good, the violation of which should concern us all. He concluded by saying that the rule of power cannot replace the rule of law. 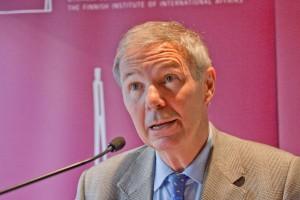 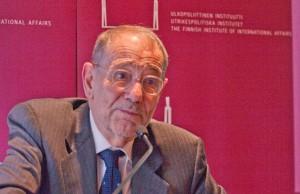 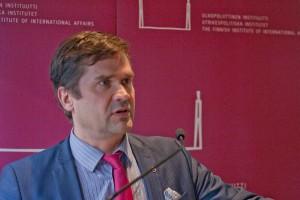 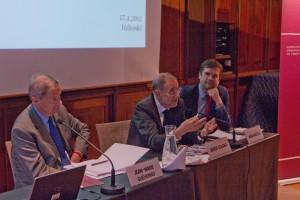 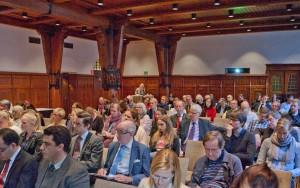