Denmark obtained four opt-outs from the Maastricht Treaty following the treaty’s initial rejection in a 1992 referendum. The opt-outs are outlined in the Edinburgh Agreement and concern the Economic and Monetary Union (EMU), the European Security and Defence Policy (ESDP), Justice and Home Affairs (JHA) and the citizenship of the European Union. With these opt-outs, the Danish people accepted the treaty in a second referendum held in 1993.

According to Danish Prime Minister Anders Fogh Rasmussen, the current opt-outs from the European Union harm Denmark’s interests. According to reports in the web magazine Earth Times, Rasmussen said his government would like to abolish the opt-outs.

On October 14th, the Finnish Institute of International Affairs organized a TEPSA Guest Lecture on Denmark’s opt-outs and what will happen to them. The results of a report on the subject, commissioned by the Danish Parliament, were introduced at the event. Dr Ian Manners, the Senior Researcher and Head of EU unit at the Danish Institute for International Studies (DIIS), presented the findings of the report. Minister of Labour, Tarja Cronberg, and Tiia Lehtonen, researcher of the Finnish Institute of International Affairs, gave commentary speeches. The event was chaired by Dr Hanna Ojanen.

Dr Hanna Ojanen opened the event by introducing the concept of TEPSA Guest Lectures and the organisation, Trans-European Policy Studies Association (TEPSA), itself. Dr Ojanen emphasized the importance of the topic and stated that Denmark has a special relationship with the EU.

Ian Manners began his presentation by introducing the study conducted by the DIIS and the methods used in conducting it. He pointed out the importance of the issue and how it has implications, not only for Denmark, but also to the other opted out member states and member states seeking further opt-outs. Denmark has for the past 15 years been opting out on four different areas: Economic and Monetary Union (EMU), the European Security and Defence Policy (ESDP), Justice and Home Affairs (JHA) and the citizenship of the European Union. In practice, the most obvious effects are that Denmark is not participating in the third stage of the Economic and Monetary Union, with less visible effects on security and defence issues and JHA. Until 1999, the opt-outs had no real and visible impact, but since then Denmark’s opt-outs have had an increasing impact. The significance of the opt-outs grew even more after the 2001 terrorist attacks and the 2002 introduction of the single currency. The point emphasized by Dr Manners was that the world has changed considerably since the opt-outs were first formulated, the areas that are affected by the opt-outs have changed and the consequences expanded.

Denmark does not participate in the third phase of the EMU and has not adopted the single currency. However, the Danish krone is tied to the euro through a fixed exchange rate policy and Denmark is participating in the ERM II. The most important consequence of Denmark opting out on EMU is the fact that Denmark has not adopted the single currency. Dr Manners pointed out that a currency can have symbolic value for its people and be linked to national identity. Greatest significance of this opt-out is the diminished political influence in regard to EU’s economic and monetary policy. Denmark is not a part of the Eurogroup where many decisions that also influence Denmark, are made.

In the area of Justice and Home Affairs (JHA), the Danish opt-out means Denmark is not bound by joint EU rules regarding for example border control, immigration, asylum and civil law. This provides Denmark the possibility to carry out a more independent policy but also means a loss of influence since Denmark has no say in the development of EU policy in these areas. With the Lisbon Treaty the significance of this opt-out will grow further. The Lisbon Treaty also gives Denmark a chance, after public referendum, to change the opt-out into an opt-in agreement.

The Security and Defence opt-out has gained a lot of importance after the wars in former Yugoslavia and the terrorist attacks in 2001. As a consequence of the opt-out, Denmark does not participate in drafting, implementing and financing decisions that affect the area of defence policy. This means, and has already happened on several occasions , that if military operations move from being NATO-led to EU-led, Denmark will pull its military forces and not continue to participate in the mission. As Dr Manners stressed, this causes confusion and the reasons for withdrawal of troops can be hard to explain to people in need of assistance.

The report also examined four special aspects of EU cooperation that are not directly covered by the opt-outs but influenced by them. These include partnerships with other countries and how the opt-outs might in some cases affect negatively Denmark’s possibilities even though it is generally considered as a desirable partner.

In her commentary speech, Tiia Lehtonen pointed out that the Danish EU-policy is very contradictory by being cautious and active at the same time. She also raised the questions of what explains the difference between the elite and public opinions and what happens if the opt-outs are abandoned and whether they should be abandoned or not.

Dr Tarja Cronberg commented on the opt-outs in general and on Denmark’s security policy. She stressed that there should be discussion if the opt-outs are a good idea or not and if yes, how they should be managed. She also stated that in general opt-outs mean a lot of wasted time and energy for everyone. In regard to security policy, Dr Cronberg pointed out that the world has changed considerably and security is no longer about individual countries but about battlegroups and crisis management. She also stressed the problematics from the Nordic point of view, of Denmark not being involved in the Nordic groups.

In the Q&A, session there was a wide discussion about referenda, and whether Denmark should hold them if people have little knowledge of the complexities of the issues. The speakers did not see this as probable. Dr Cronberg also commented that the Danes are the most knowledgeable in EU matters and having the attitude that if issue is a complex one it should be explained in terms that are more understandable. 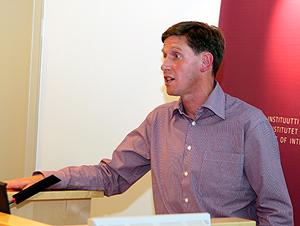 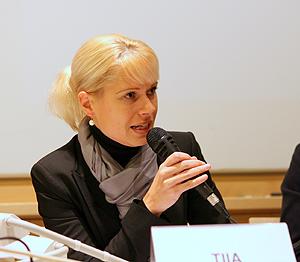 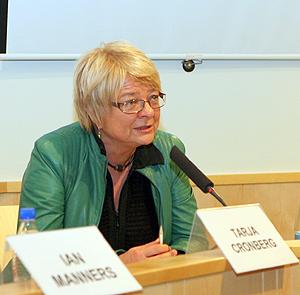 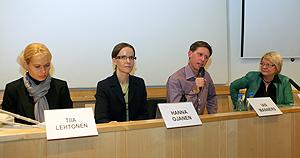