The seminar will discuss the recent regional political developments related to the Israeli-Palestinian conflict,concentrating on the economic aspects of the Arab Peace Initiative. What are the economic aspects of resolving the Palestinian refugee question? How will the territorial link between Gaza and the West Bank affect economic development? What is the comparative viability of the two-state versus one-state solution from a political economy point of view?

To open the seminar, Dr Mika Aaltola, Programme Director at the Finnish Institute of International Affairs, welcomed the speakers and the audience to the event. He then said a few words on the political economy of the Middle East peace process as it presents itself in a wider regional context.

Dr Arie Arnon, professor of Ben Gurion University, started out by saying that he and the other speaker of the seminar, Mr Saeb Bamya, are both coordinators in the AIX –group, a think tank that tries to bring experts from both sides of the conflict lines together to think of solutions to the “big questions”. Dr Arnon continued by saying that after the collapse of the Second Camp David conference and the start of the second intifada in 2000 the political atmosphere between Israel and Palestine changed considerably. One of the first conclusions drawn by the group has been that the failures of the Oslo process, which started in 1993 with an aim of reaching a Permanent Status Agreement, has really been a failure of gradualism: in this situation it is not possible to move from one stage to another gradually. Rather, Dr Arnon said, it would be much more fruitful to concentrate the efforts on the “end game”, i.e. the permanent status, and using the idea of reverse engineering find out how that goal is reached. Both speakers still firmly believe in a two-state solution, and with this end game in mind the two biggest issues on the table are the Jerusalem question and how to solve the refugee problem that started already before 1967. Analyzing how to satisfy the two sides in these issues is a big part of the work done by the AIX group.

Dr Arnon concentrated on discussing the structure of the economic relations between Israel and Palestine in order to gain a more concrete view of this aspect of the situation. Although the region is very small the economic arrangement between the two is such that in practical terms it treats them as independent states in trade and policy formulation. A much better solution suited to aid flows of goods and labour between Israel and Palestine would be to establish a free trade area -type of agreement where the borders would be relatively flexible – something akin to Europe in the 1950s and 60s before the formation of the EU. Such modest integration of the economy in the region would already be significant and represent the most viable solution, in particular if agreements for better regulated flows of labour were also included.

The Israeli economy is about 20 times bigger (when including the areas of the West Bank, Gaza Strip and West-Jerusalem) than that of Palestine. Since 1993 the gaps in the GDP of the two areas have been widening considerably, contrary to what was hoped to be achieved after the Oslo agreement, Dr Arnon concluded.

Dr Saeb Bamya began his presentation by saying that bilateral negotiations will lead nowhere unless there is an international effort to fill in the gaps of asymmetry. The stronger side in particular can also create new facts on the ground (such as continue with settlement construction) to pre-empt decisions and to make the two-state solution even harder, or nearly impossible to achieve, Dr Bamya analysed.

The AIX group seeks to implement the idea of reverse engineering, as mentioned above, as a way to map out the course the two sides could take. The actual Roadmap agreement of 2003 did not include considerations on the economy of the region and cannot thus be used as a reference point for that purpose.

Regarding the refugee problem the question raised by Dr Bamya was: How could a future Palestinian state absorb a large number of refugees? The speaker presented the Jordan Valley as a consideration from this point of view: it covers about 1/3 of the West Bank and represents a potential area for absorbing refugees as well as maintaining economic activity such as agriculture, housing and tourism. However, the Israeli government, according to Dr Bamya has placed a great deal of restrictions on Jordan Valley, taking pre-emptive measures to improve its position in negotiations. In East-Jerusalem it has also been impossible to for example build a new house, do business or conduct many other ordinary activities. A key question with regard to West Bank and Gaza on the other hand is having a territorial link to other Palestinian areas so that the economic viability of a future Palestinian state could be ensured. The question of a territorial link has however never been addressed by the Israeli government; the view of the AIX group is that the planning for the link should be started immediately if the parties are serious about a two-state solution. Finally, Dr Bamya emphasized that bilateral negotiations between the two sides are impossible, precisely because of the huge asymmetry between Israel and Palestine. The sides are far away from the completion of the peace process, going back to a time even before the first Camp David negotiations.

To expand on the topic, Dr Arnon noted that the AIX group is trying also to look beyond Israel and Palestine; the status quo cannot continue far into the future without relations deteriorating considerably, and also for this reason the wider region should be taken aboard early. The Arab Peace Initiative calls for the normalization of ties between Israel and the rest of the region, and the economic impact of the Initiative is now being researched, in particular with regard to what it means in terms of labour flows in the region. Dr Bamya also noted that while previously the regimes in the neighboring Arab countries were for the upholding of the status quo, now after the Arab spring there is less willingness for it any longer.

In the Q&A part of the seminar several audience members wanted to know about the possible consequences of a continued status quo, as well as the costs of the settlement activity to Israel. According to Dr Arnon, the pre-emptive actions taken by Israel such as the building of the wall and the so called cantonisation of the territories have all meant that it is impossible to make a true independent Palestinian state on this basis – hence a new paradigm for solving the problem is needed. Dr Bamya added that the status quo is gradually turning into something akin to apartheid, and hence there can be no lasting solution based on the current state of events. At the moment the environment is mainly favourable for the extremists who are the real enemy for both sides. 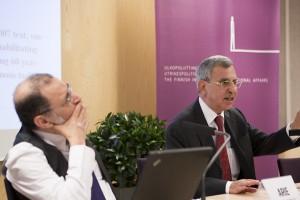 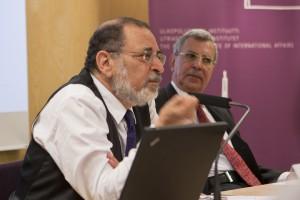 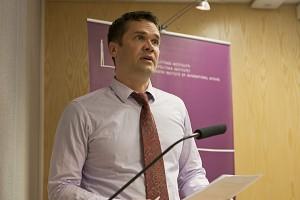