etusivu / Tapahtumat / Economic Sanctions as a Foreign Policy Tool: When...
jaa
jaa
While economic sanctions are increasingly being used as foreign policy tool, particularly by Western policymakers, scholars continue to debate whether they actually work. This seminar will look at the use of sanctions in several cases in the Middle East: the sanctions against Iran and Iraq, as well as the Arab boycott of Israel. It will also examine the use of sanctions against Russia and the apartheid regime in South Africa. By comparing past and present instances of success and failure, the seminar will discuss the conditions under which sanctions may successfully be used and the type of sanctions that work best.
Speaker:
Paul Rivlin, Senior Fellow, Moshe Dayan Center for Middle East and African Studies, Tel Aviv University
Comments:
Carrie Weintraub, Fulbright-Schuman Fellow, the Finnish Institute of International Affairs
Tito Gronow, Visiting Senior Fellow, the Finnish Institute of International Affairs
Chair:
Mikael Wigell, Senior Research Fellow, the Finnish Institute of International Affairs

Senior Research Fellow Mikael Wigell opened the seminar.  Paul Rivlin, Senior Fellow at the Moshe Dayan Center for Middle East and African Studies at Tel Aviv University, gave a historical overview of the use of sanctions. He emphasized that economic sanctions were already used in ancient Greece. In the history of sanctions, the 1973 oil embargo imposed by the Organization of Arab Petroleum Exporting Countries (OAPEC) was of enormous significance. It for example gave rise to the International Atomic Energy Agency (IAEA), and led the United States to ban the export of oil from the U.S., a ban which has now been lifted. When considering the costs of sanctions, Dr Rivlin noted that Israel has been under sanctions longer than any other country, due to the boycott by the Arab countries. It has for example raised the transportation costs of imported goods. However, the boycott weakened as the oil prices started to fall. According to Dr Rivlin, economic sanctions received a negative reputation after Iraq was placed under sanctions in 1990. Strict economic sanctions led to a socio-economic catastrophe in Iraq, leaving hundreds of thousands of people dead. In consequence, smarter sanctions needed to be developed. These were designed to target regimes and individuals, not the whole society. Dr Rivlin also addressed the sanctions on Iran, which were put in place by the U.S. after the 1979 hostage crisis, and later by the United Nations Security Council, when Iran refused to end its uranium enrichment programme. He came to the conclusion that in order for sanctions to be effective, they must be focused on a specific aim, they must be ”monitorable”, and those imposing sanctions need to be effective. However, we must not forget the important role played by the internal situation of a country that is being targeted by sanctions. Dr Rivlin emphasized that for example in the cases of apartheid South-Africa and the nuclear programme of Iran, the internal situations mattered greatly.

Tito Gronow, Visiting Senior Fellow at the FIIA, noted that the European Union (EU) has been more open to resorting to sanctions beyond the UN, and it uses economic sanctions as a strong diplomatic tool. For example in Iran, the EU extended its sanctions beyond the UN, because the EU was interested not only in the suspension of the uranium enrichment programme, but also in supporting reformers in Iran. The EU has also been more eager to scale back its sanctions, as Iran represents a large market for European companies.  According to Dr Gronow, imposition of sanctions falls under the Common Foreign and Security Policy of the EU, and during the process of finding a common position, the costs of sanctions and possible counter-sanctions are considered.

Carrie Weintraub , Fulbright-Schuman Fellow at the FIIA, stated that the sanctions are mostly lifted because of the security interests of the country lifting them. She noted that in the 1990s in Indonesia, the EU lifted sanctions earlier than the U.S. as it wanted to develop a better relationship with Indonesia, and the EU believed it to be on the road to democracy. The U.S. lifted sanctions seven years later, when Indonesia was seen as an important partner in the fight against terrorism. In Belarus, the EU also lifted sanctions earlier than the U.S. Another case was the violent period in Nigeria during the 1990s. The U.S. did not impose an oil embargo because the situation was not a threat to its national security. Similarly, the U.S. did not sanction Pakistan after the 2009 uprising, because it was not in the strategic interest of the U.S. To conclude her comments, she asked whether we have moved too far from the original purpose of sanctions – to foster democracy and human rights – by designing these new smart sanctions.

The floor was then opened for questions, which concerned for example the limits of the use of sanctions, what we can learn from the sanctioning of non-state actors, and how the economic models affect the effectiveness of the sanctions. Dr Rivlin noted that each case is different and must be considered separately. Interdependency with Russia and the West limits the use of the sanctions. He also emphasized that international and open economies can be easily hurt by the sanctions, as well as economies dependent on the export of raw materials. Dr Gronow noted that the EU’s sanctions towards al-Qaeda are rather traditional and similar to sanctions towards state-actors. To conclude the seminar, Fulbright Fellow Weintraub noted that no country has ever met all the goals, but sanctions definitely have different sets of goals. 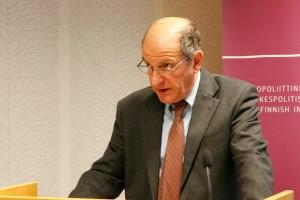 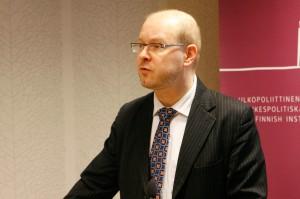 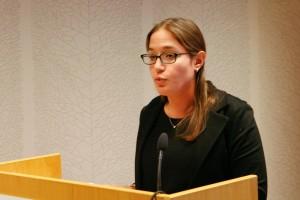 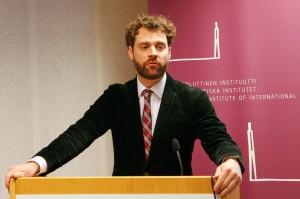