Despite remarkable improvements during the last ten years, the Russian economy remains among the most energy inefficient in the world. Until recently energy has been abundant and cheap in Russia, encouraging its inefficient use and outright waste. But times are changing. Russia must enhance its use of energy resources in the future if the country targets the levels of economic development in the West.

Also the political mood is changing. The Russian administration is currently preparing a legislative package based on the energy efficiency law passed in July 2008. In April 2009, Prime Minister Putin outlined the Russian climate policy to be based on energy efficiency improvements, and the Minister of Natural Resources Yuri Trutnev stated that such climate policy would have a positive impact on the Russian economy.

Links between Economic Growth and Energy Consumption in Russia
Dr. Pekka Sutela
Head Adviser to the Board, Bank of Finland Institute for Economies in Transition (BOFIT)

Dr. Pekka Sutela
Head Adviser to the Board, Bank of Finland Institute for Economies in Transition (BOFIT)

Dr. Pekka Sutela, Bank of Finland Institute for Economies in Transition, gave the first presentation on the ‘Links Between Economic Growth and Energy Consumption in Russia’. Dr Sutela initially highlighted the Russian approach to the issue of energy efficiency – and its importance – with a quote from Russian President Medvedev in July: “Energy efficiency is such a topical and also for us painful issue that practically any work on that theme must be seen as very, very important.” The current situation of poor efficiency is partly seen to be an inherited remnant from the USSR, and hence improving energy efficiency in Russia is a matter of modernising the economy and the technology to be used. At the moment Russia is a particularly wasteful user, but the way in which Russia earns its revenues also plays its part in this state of affairs. As there is no alternative to revenues generated by energy exports, energy efficiency and inefficiency are sources of wealth to Russia.

Russia’s energy efficiency has improved on average by 2,5% per year since 1990 yet this is not seen as a cause for celebration, with much of the advances coming from a structural shift in the Russian economy to less energy-intensive services, and this is from where most of the improvements will come, rather than technology. For the future, Dr Sutela believes the recent economic crisis will continue to negatively impact on growth rate, which in turn has ramifications for the Russian energy efficiency strategy, which is based on an optimistic view of growth. A continued improvement in energy efficiency of 2-3% per year should, though, be feasible.

Inna Gritsevich, Energy Efficiency Project of WWF-Russia, took the floor next to present on The Trends and Potential of Energy Efficiency in Russia. The opening gambit stated that Russia’s energy intensity is two times greater than the world average due to outdated technology and a drastically inefficient district heating system. Some of this high energy intensity can be attributed, however to Russia being on average a very cold country, with a large territory and unevenly distributed population, yet this does not justify or excuse Russia’s high energy intensity. One impact on energy intensity came from the rise in prices of raw materials – thus raising GDP whilst energy consumption remained stable. It was noted that is relationship was indicative of a Russia too vulnerable to fluctuations in the global economy.

President Medvedev pledged improved energy efficiency by 40% by 2020 relative to 2007, but analysing the numbers revealed that this was nothing special. The clear message at the end of the presentation was that Russia’s Energy Strategy pays no attention to energy efficiency, although this is mentioned throughout the document – but it is glaringly not a high-profile matter. The Energy strategy is not a road map, nor a plan, but merely some intentions; such existing plans to include replacing incandescent bulbs with compact fluorescent bulbs by 2011, though this poses its own problems, with allegedly unreliable goods coming from China, and the waste of which is dangerous and hard to dispose of.

Yngve Söderlund from the Nordic Investment Bank next addressed the audience with ‘Lessons Learned from Energy Efficiency Projects in the Baltic Sea Region’. He stated that EU countries were heavily emphasising energy efficiency in their strategies, and this was justified as there is currently potential for improvement in this area. The case was presented that energy efficiency programs in housing and public services in Russia, but that investment needs to be carefully considered on a case-by-case basis as it was difficult to see how to motivate people and raise support for these schemes. However, setting up a regulatory build with regards to this in Russia would be exceedingly difficult.

In the Q&A for this first session, the audience posed a wide range of questions. These included questions on if there had been any improvement as to the policy-making process of the energy strategy or had the same mistakes as those from the previous, mid-nineties incarnation been repeated. The speakers offered the answer that the energy strategy is very complicated in terms of its incentives, but this time around there is money available for implementation of the policies. The following enquiry was as to why many proven efficiency schemes are not implemented on a wide scale despite the clear benefit to all – outside investors and Russia. The response was that the situation is complicated; poor incentives and policies make it difficult. In response to the next question, the panel presented the view that current economic climate was positive in the sense that the lack of available money put damaging restrictions on prospective nuclear power projects in Russia. The final query elicited that as well as the difficultly for districts to deal with these matters of energy efficiency, poor management in general was the main culprit for the continued Russian energy inefficiency.

After the coffee break, session two began with Dr Anna Korppoo of the Finnish Institute of International Affairs taking the floor to present on the topic of ‘Linkages between Russian Energy & Climate Policies towards Copenhagen’. Dr Korppoo set out to highlight Russian energy policies and their impact on emissions, the Russian position for Copenhagen and the divergences of these two. The particular importance of these links is embedded in the fact that roughly 80% of Russian emissions come from the energy sector.

Starting with the renewables policy, it was stated that the share of renewable energy was to be increased from 1.5% to 4.5% by 2020. However, the thinking behind this is not to save on coal use, but rather to thus have more gas available for export. More widely, a switch to coal – an abundant resource in Russia – is not very practical as the infrastructure is based on gas, and furthermore the transport costs of this may be prohibitive. As for nuclear power, the new planned capacity is only replacing the old, so as to have no impact on emissions.

Whilst Russia, as a major emitter, should be part of any post-2012 climate deal, Dr Korppoo points out that the Russian commitment of a -10 to -15% reduction by 2020 is no target at all, as by 2020 Russian emissions have been estimated to be around -40% compared with the 1990 base year. This would then create a ‘Copenhagen surplus’, which could then be traded to Annex I countries. It was the opinion of Dr Korppoo that, as the above hints, the Russian government is focussed on foreign policy and the potential economic benefits of global climate change regulation, rather than solving the problem of anthropogenic global warming. However, it should make sense for Russia to improve its energy efficiency in order to save gas for export, and Joint Implementation and similar schemes could perhaps finance energy efficiency policies.

Aleksandra Novikova gave the last presentation on ‘Russian Emission Scenarios and Energy Policies’. Dr Novikova used data to model two boundary scenarios; a “maximum scenario” in which energy efficiency was frozen, and a “minimum scenario” which forecasts based on the potential for CO2 mitigation from technology being realised. These two possible scenarios equate into in the pessimistic case efficiency in 2020 being 77% of the 2007 level whilst the innovation sees efficiency in 2020 equalling 59% of the 2007 level.

The impact on emissions then would be, if the whole potential for improvement is used, around 50% of 1990 level of emissions. The business as usual scenario would mean that emissions in 2020 would be close to those in 2008.

Concerning Copenhagen, the recommendations for a target based on the data presented are between 20 to 35% below the 1990 levels, with -35% achievable if renewable energy and energy efficiency policies are implemented). Dr Novikova qualified her findings, stating that modelling attempts are far from perfect yet the best way to forecast the future. In addition, the ongoing economic crisis, GDP forecasts and oil prices will impact upon the research as the assumptions of these are uncertain.

The ensuing Q&A session opened with a query as to what the conditions for an optimistic scenario are. Dr Novikova answered that what was needed was the market transformation of the Russian economy, ceasing the use of inefficient technology, a comprehensive introduction of policy tools and, in essence, required replacing the whole range of technology used in Russia.

Next, the audience posed questions on Joint Implementation (JI) – why is it not working and what does it mean to make Joint Implementation projects more available to Russia? Dr Korppoo’s response stated that the necessary legislation enabling such projects was still being prepared and thus not in place, and that there are currently disincentives for companies to even launch such projects in Russia. She went on to say that there was no longer enough time to get JI project approval, generate credits and sell them, thus rendering the mechanism dead in the Russian context. Inna Gritsevich concurred on the temporal issue, but that there were other political obstacles, resulting in a number of JI projects ready and waiting to be implemented but left unapproved. Furthermore, the panel stated that governments have concerns regarding putting taxpayer’s money into schemes if they cannot be sure where the money will actually go, and that there is no interest in JI at the top level.

Pekka Sutela wrapped up the seminar, stressing that there was serious disagreement between the World Energy Outlook on future Russian GDP, specifically with regards to the impacts from fluctuating oil prices. The political leadership in Russia had been advised that the Kyoto Protocol was a straight-jacket, adversely affecting the Russian approach. So far Russian negotiations in Copenhagen have lacked enthusiasm, but that Russia also wants respect. The actual position is still undecided, but the imminent Russian cabinet meeting on the Copenhagen position may clear things up. 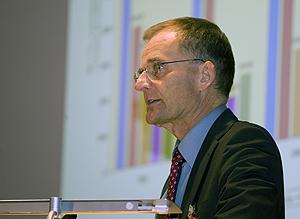 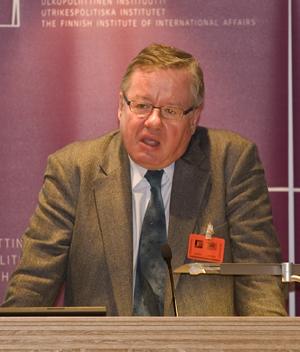 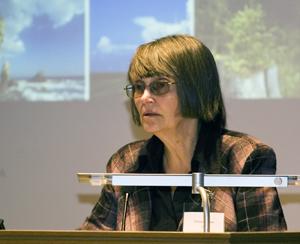 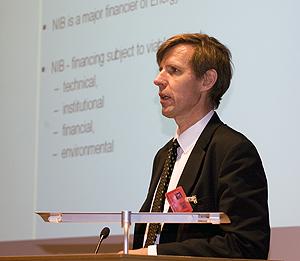 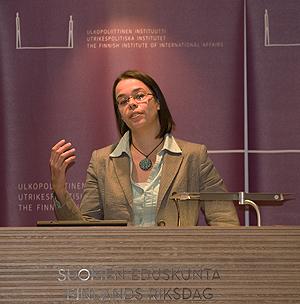 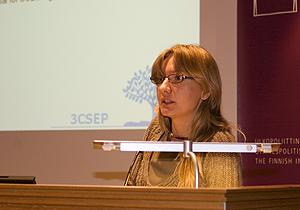