Turkey’s EU candidacy was confirmed in the 1999 Helsinki European Council. As Finland prepares to take the responsibility for EU Presidency in July, this FIIA seminar looks at the current state of EU-Turkey relations. During the past two decades, a lot has changed both in the EU and in Turkey, as well as in the world around them. How should one assess current EU-Turkey relations in a wider geopolitical context? How does the EU-Turkey relationship affect, and is itself affected by, increasing multipolarity? 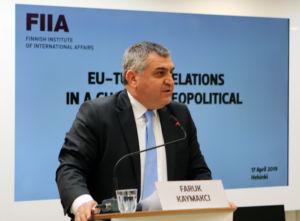 Ambassador Kaymakci has been Deputy Minister of Foreign Affairs and Director for EU affairs since
August 2018. Previously, he served as the Permanent Representative of Turkey to the European
Union (February 2017-August 2018), Ambassador of Turkey to Iraq (October 2013-January 2017) and
Consul General of Turkey in Basrah (2011-2013). He was the Chief Foreign Policy Advisor to Turkey’s
EU Minister and Chief Negotiator and Director for EU Communication at the EU Ministry (2008-
2011). A graduate of the Ankara University, he also holds two Master’s degrees from the London
School of Economics and College of Europe (Brugge) in the field of economics and politics of the EU,
respectively. 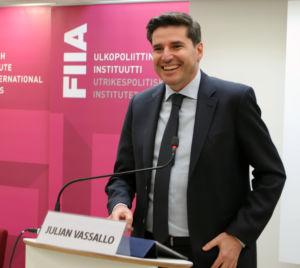 Political Counsellor, Delegation of the European Union in Ankara

Julian Vassallo is Political Counsellor at the Delegation of the European Union in Ankara since 2015.
Previously he served at the EU Delegation to the Philippines working primarily on the stand-off in
the South China Sea. He served as Head of the European Parliament Office in Malta between 2006-
2011. From 2004 and 2006 Julian formed part of the MENA Task Force in the Policy Planning Unit
of EUHR Javier Solana. He graduated Doctor of Laws from the University of Malta and Master in
Advanced European Political Studies from the College of Europe (Bruges). He co-authored “Guide to
EU Policies”, Blackstone Press 1998. 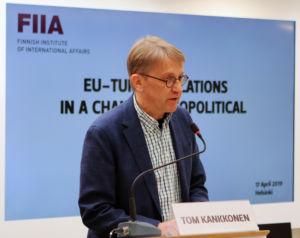 Tom Kankkonen is a journalist who has worked with the Finnish Broadcasting Company YLE since
2001. He has been a foreign news correspondent since 2012, and as such has covered Turkey and Syria,
travelling to both countries several times. His reporting from the region earned him the Journalist of
the year –prize in 2015. He has published a book on Turkey (Turkki – Eurooppaa ja Aasiaa) in 2005 and
a book on islam in Europe in 2008 (Islam Euroopassa). Kankkonen has an M.A. in Political Science from
Åbo Akademi.