etusivu / Tapahtumat / Euro-Atlantic Security: Challenges and Prospects
jaa
jaa
The seminar will deal with contemporary challenges to European security with particular reference to the dangerous deterioration of relations between Russia and the West. In the present political climate a corrosive lack of trust undermines cooperation between the two parties and their political leaderships. Existing forms of cooperative security are not functioning properly and the existing regime for arms control has been partly abandoned. Acknowledging the great risks, in the present confrontation, the seminar will set out a series of ideas and practical steps to tackle the challenges. The underlying thesis of the seminar is that the only sustainable security is security based on trust and cooperation.
Speakers:
Des Browne, Vice Chairman, Nuclear Threat Initiative (NTI)
Lord Browne of Ladyton (Des Browne) has served as NTI’s Vice Chairman since 2014. Former UK Defence Secretary Browne was a Labour Party MP from 1997 to 2010 and has occupied several ministerial positions. He is a member of the Privy Council and was introduced to the House of Lords in 2010. His experience further includes acting as Prime Minister Gordon Brown’s Special Envoy to Sri Lanka, serving on the Joint Committee on the National Security Strategy, and being the Convenor of the Top Level Group of Parliamentarians for Multi-Lateral Nuclear Disarmament and Non-proliferation.
Jaakko Laajava, Former Under-Secretary of State (Foreign and Security Policy), Ministry for Foreign Affairs of Finland
Jaakko Laajava is the former Under-Secretary of State for Foreign and Security Policy in the Finnish Ministry for Foreign Affairs. In 2011, he was designated the facilitator for the 2012 conference on the establishment of a Middle East zone free of nuclear weapons and all other weapons of mass destruction. With an extensive career in the Finnish Foreign Service he has, for example, held the position of Finland’s ambassador to the United States and the United Kingdom.
Comments:
Michael Haltzel, Visiting Senior Fellow, the Finnish Institute of International Affairs
Chair:
Teija Tiilikainen, Director, the Finnish Institute of International Affairs

Teija Tiilikainen – the director of the Finnish Institute of International Affairs (FIIA) – opened the seminar by noting the growing concern caused by the increasing conflict and military confrontation in Europe. The current developments are characterised by a militarisation of security politics and the weakening of the security dialogue between the West and Russia. Russia’s annexation of Crimea, its backing of the separatist forces in Donetsk and Luhansk, and the resulting Western sanctions regime are hindering normal communication between the parties. Dr Tiilikainen emphasised the timeliness of the conference, since it looks at the prospects of improving the current security situation.

Lord Browne began his remarks by noting the weakened opportunities for discussing security across the Euro-Atlantic region. However, he noted that there are still workable options for security, which give rise to some cautious optimism. Lord Browne emphasised that the fundamental challenges to security are not new. He underlined the main problem as the lack of co-operation based on the rule of law.

US-Russia relations are at their lowest point since the end of the Cold War, and this has led to a military face-off and risk of escalation. The prospects of miscalculation and misunderstanding are real. This is reflected also in the new security concerns in Finland.

According to Lord Browne, the key question at the moment is: will we be able to maintain the current security architecture – or will we go into a bloc vs. bloc approach. The US cannot be expected to offer a direction in this regard. The antagonism is represented by both the United States and Russia with the new US Chairman of the Joint Chiefs of Staff General Dunford stating that Russia poses the greatest security threat to the United States. Russia on the other hand has made it clear that it considers NATO’s expansion as the greatest threat to its security.

The deterioration of the situation has raised the prospect of the use of nuclear weapons to the highest level since the end of the Cold War. One important feature of this confrontation has been the increase in the number of close military encounters. Some of these have been classified as high risk incidents.

Russia has greatly increased the number and size of its military exercises on the regions bordering NATO, and NATO has begun to increase its military footprint in Central and Eastern Europe. Russia has revised its doctrine on the use of nuclear weapons, and there are voices within NATO calling for exercises of moving from conventional to nuclear weapons use.

The European Leadership Network has issued a call for the urgent convening of the NATO-Russia Council to sign a Memorandum of Understanding for the de-escalation of these tensions. This proposal includes several steps that might be taken. Lord Browne suggested that this initiative might be taken forward by the OSCE as well.

With regard to the developments in the nuclear area, Lord Browne highlighted the steps taken to resolve the Iranian nuclear issue. He emphasised the unforeseen cooperation that had made this deal possible. Another important step in this field would be the entry into force of the Comprehensive Nuclear Test-ban Treaty (CTBT). This treaty represents very good progress on nuclear non-proliferation. All European states including Russia have signed and ratified the treaty. The elimination of chemical weapons in Syria should also be seen as positive development. The Vienna conference on the humanitarian impact of nuclear weapons is also a key step forward.

Finally, Lord Browne presented some ideas on the future of the Euro-Atlantic security order. He highlighted how all the parties understand that we are facing a crisis and that the current security architecture is not adequate. The OSCE lacks the political will to resolve the issue, and the NATO-Russia Council has been suspended because of the annexation of Crimea by Russia. In Ukraine, the Minsk II agreement is a spot of light, but in its current form it is hardly sustainable.

According to Lord Browne a new framework for action is needed. One such proposal is the Euro-Atlantic Security Initiative, which is based on a comprehensive security approach and outlines steps that could be taken in the course of the next fifty years. There is increased need for leadership, and the Euro-Atlantic leadership group with direct links to the most important heads of state could serve this purpose.

In his remarks, Ambassador Laajava underlined the fast-changing nature of global crises and the subsequent difficulties in answering them. At the moment, both the United States and Europe are occupied with several internal problems in addition to global questions.

Recent developments have underscored the importance of geopolitics. This stands in stark contrast to the 1990s, when faith in globalisation was strong and the liberal world order was doing well. At the time the new Russia seemed to offer opportunities for the Finns. Political developments in Russia were encouraging, and the modernisation of Russia appeared promising.

Why did it go wrong? According to Ambassador Laajava, one school of thought places the blame on the West and sees President Vladimir Putin as simply reacting to foreign pressure. Another school focuses on Putin’s personal interests and ambitions.

Ambassador Laajava stressed that the country that President Putin inherited from Medvedev was different from the one that he left. Due to the colour revolutions that followed in Russia’s neighbourhood, Russian society was mobilised to counter possible anti-regime activity. This has had several implications. The Russian people support foreign policy victories, traditionalism and nationalism are on the rise, and the use of military force is not off-limits. Hence NATO is responding with a Rapid Reaction Force.

These developments are worrisome for Northern Europe. Finland is trying to ensure the continuation of normal relations with Russia. Ambassador Laajava emphasised, however, that the West is not prepared for appeasement.

According to Ambassador Laajava, during the Cold War it was natural to assume that Finland and Sweden would be able to stay out of a large-scale conflict, but this is no longer the case. It is notable that the Swedish debate on NATO is livelier than ever before. Those who oppose Swedish NATO membership refer to Sweden’s long history of neutrality and peace. However, Sweden has traditionally been a very important military power in Europe. Before the independence of the Baltic countries the greatest threat to Sweden was a Russian attack on Gotland and southern Sweden. At the moment it can be argued that Sweden would be more secure as a member of the alliance. Ambassador Laajava emphasised that several Swedish political parties are now advocating a joint Swedish-Finnish entry into NATO. This development is occurring simultaneously with an enhanced Nordic Defense Cooperation (NORDEFCO).

In his comments, Michael Haltzel, Visiting Senior Fellow at FIIA, provided a cautionary note on the prospects of the relations between Russia and the West. He thought that the warning issued by the incoming US Chairman of the Joint Chiefs of Staff General Dunford about Russia constituting the biggest strategic threat to the United States was correct. At the same time he praised the Iran nuclear deal and advocated universal ratification of the CTBT. According to Dr Haltzel the overall reality is that Russia – led by President Putin – is a revisionist power that has broken out of the post-Cold War order. At the moment Russia supports only authoritarian powers. This poses a challenge to some of the fundamental values of the West, especially since Russia wants to severely weaken several autonomous units of the OSCE. The United States, however, will not approve these proposed changes, nor would several of its European allies. Russia is currently violating several commitments it made in the Astana Commemorative Declaration, which it signed in 2010.

Dr Haltzel called NATO enlargement the most successful western foreign policy achievement since the end of the Cold War, since it provides security to an additional 110 million people in Central and Eastern Europe. From the late 1990s until 2001-02 there was serious discussion of Russia eventually joining NATO. However, at the moment one cannot be overly optimistic about progress in relations between Russia and the West since regime survival is President Putin’s number one priority. 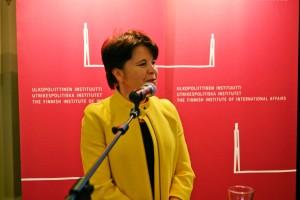 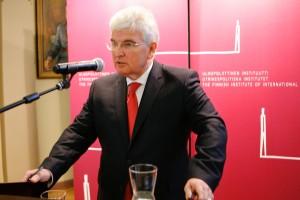 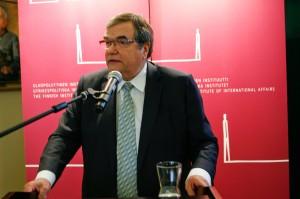 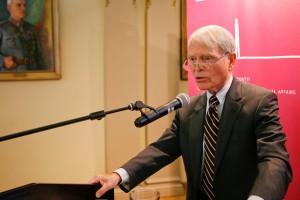