Mr Juppé started his speech by sharing his conviction that the new transatlantic and global context makes the European Security and Defence Policy (ESDP) more relevant and necessary than ever before. He reminded that while the economic crisis dominates discussions at the moment, prevailing conflicts and climate change should not be forgotten as important factors of insecurity in the world.

According to Mr Juppé, the new global context is characterised by two major factors: the geopolitical revolution that has shifted the centre of power, values and economic contribution towards Asia and other parts of the world, and the new U.S. administration. Mr Juppé noted that although the USA maintains a pre-eminent position in terms of strategic, military, economic and scientific power, the world has become multipolar. The main threats to European security come from the ongoing crisis in the Middle East, global terrorism and the proliferation of weapons of mass destruction, as well as instability on the southern shores of the Mediterranean and the wide-ranging effects of climate change.

On Russia Mr Juppé wanted to make a specific point by saying that although the country has chosen a trajectory that raises questions, there is no unavoidable geopolitical factor that would lead to structural tensions between Russia and the western world. He added that in this multipolar world it would be dangerous to adopt an analysis based on the ‘clash of civilisations’ –theory, because it risks becoming a self-realising prophecy. Instead, he spoke of three simultaneous revolutions: the geopolitical realignment, a digital revolution and an ecological revolution, with each bringing new challenges and requiring the re-evaluation of existing policies.

Regarding the new U.S. administration, Mr Juppé reminded that it does not mean an automatic convergence between the interests of Europe and the USA. He found it difficult to evaluate what U.S. foreign policy will look like, but noted that the Obama administration has adopted a pragmatic approach instead of an ideological one. A pragmatic approach will be concretised only in the long term and is unlikely to lead to sudden changes of direction. The synthesis of the different ideological tendencies of the members of the U.S. administration has been qualified by Secretary of State Hillary Clinton as ‘smart power’. This mix between hard and soft power can be seen as having similarities to the EU policy model. Mr Juppé found the first actions of president Obama encouraging as the President engages in dialogue also with those previously seen as enemies. And as a Professor of constitutional law Obama is attached to international legality.

In this context Mr Juppé considered the ESDP to be an indispensable element. He did not equate a multilateral world order with a balanced and cooperative one and maintained that the EU finds itself in a challenging position. Traditionally the EU has instead of coercion counted on the power of the attraction of its model of integration. Mr Juppé noted that during the last 15 years there have been encouraging advancements on the ESDP front. Most notably, institutional developments, the adoption of a proper defence strategy of the EU, the Berlin Plus agreements between the EU and NATO and especially in the form of important operations such as the ones in Chad and Kosovo. He underlined that Europe needs autonomy in defence and security without renouncing NATO. This is a long and often slow project that unquestionably remains unachieved.

The major challenge for the ESDP is one of capacity and therefore of political will. The goals set in Helsinki in 1999 have still not been achieved and the defence effort is still unequally distributed between Member States. For this reason, the ratification of the Lisbon Treaty is a fundamental step as it will reinforce the actors of the ESDP, extend the action capacities of the EU, include a solidarity clause and most importantly offer an opportunity of reinforced defence cooperation through the creation of the permanent structured cooperation. Also the strengthened role of the EU High Representative for the common foreign and security policy will, if the Lisbon Treaty comes into effect, have a significant impact on the coherence of EU policy.

On the relationship between the ESDP and NATO Mr Juppé noted that the two are complementary and it would be outdated to see them as opposed to one another. Mr Juppé pointed out that the EU produces a quarter of the world’s wealth and NATO for its part has been a central guaranteur of peace in the past half-century. Balanced cooperation between the two is not only a strategic necessity but also a natural process, as the Member States of both share the same values.

Mr Juppé was critical towards the return of France to the integrated military command of NATO. According to him the decision is based on the belief that the USA will consider Europe as an equal partner in the security dialogue and will give Europe real responsibilities in the chain of command. According to Mr Juppé it is yet to be seen whether this risk was worth taking and whether it was done at the right moment. It will also be interesting to see what consequences it will have on the development of the European defence structures. Mr Juppé pointed out that there is a risk that there will consequently be less enthusiasm on the part of the EU Member States to advance them.

In the Q&A section the audience asked questions about the Israeli-Palestinian conflict, nuclear disarmament, cooperation between the EU and NATO, the European neighbourhood policy and Africa. Mr Juppé expressed a hope that now the EU could become a fully-fledged actor in the Middle-East, while still continuing the French policy of friendship towards both parties of the conflict. On nuclear disarmament, he maintained that France will hold on to her nuclear arsenal as a deterrent – the US and Russia have far larger stockpiles of nuclear warheads, which would have to be reduced a great deal before France would be ready to consider relinquishing her capacity. On the question whether the EU should join NATO collectively, Mr Juppé applauded the ambitious thought, but questioned whether unanimity on the part of the Member States would be feasible. On neighbours and enlargement he expressed a belief that the Union should hold onto its current borders, while fostering special relationships with its neighbours. 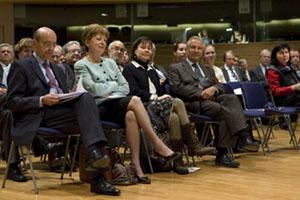 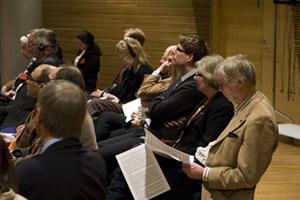 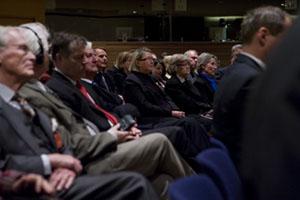 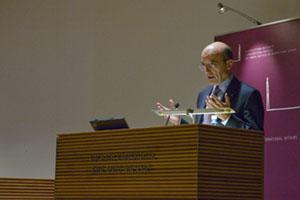 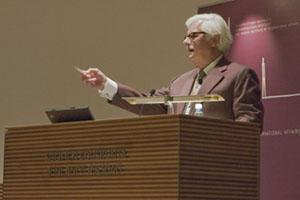