This event marked the launch of the Research Programme on the European Union of the Finnish Institute of International Affairs. The programme is actively engaged in the import and export of ideas and debates across Europe and intends to enliven the Finnish debate by following closely the discussions in other EU countries. We start the year with a look at how Turkey’s membership in the EU is debated in various EU member countries.

First speaker was Dr Nathalie Tocci from the Istituto Affari Internazionali, Rome. The seminar also served as the launch of the.report Conditionality, impact and prejudice in EU-Turkey relations: the variety of national debates edited by Dr Tocci.

According to Dr. Tocci, the public debate in Europe does not always concentrate purely on the EU-Turkey relations, but other issues like domestic politics and views on Turkey as a country are often present in the discussion. Dr Tocci outlined the results of the report into three categories: conditionality, impact and prejudice.

The conditionality appears in the debate in the form of the depolitization of the question of Turkish accession to the EU. With this approach the accession is presented foremost as a technical and objective process, and sensitive issues as the death penalty in Turkey are depoliticized. This helps to diffuse the objections to Turkish membership of the EU in the member-states and to ignore the political aspects, concentrating on the technical points of accession.

The impact of Turkey’s membership in the EU can be described from a positive point of view as re-enforcing Europe’s economic position in global markets and strengthening energy security for Europe. Impacts for EU can also be seen from a negative point of view, where Turkey’s accession would make EU-institutions less workable and functional. Here the decisive attitude lies in how Europe is seen as a political project.

In public opinion of different EU-countries one can hear the echoes of identity politics. Within the German, Danish and Dutch debates the integration of domestic Muslim populations is a decisive factor, which inhibits a sensible national debate on Turkey, while it concentrates on the essentialist question “can the Others be integrated into Us”. In France the debate is less openly discriminative, focusing on the view that any political actor should be able to delimit its borders, in this case national borders. In the debates one can also hear worries about the increase of immigration in case of Turkey’s accession into EU, which are closely linked to the identity question as well. The social and economic worries build upon the worries of Europe’s place in the age of globalization and harshening economic competition in the world.

The prejudices – perceptions and misperceptions – on Turkey are the third important way to categorize the debates in the European countries. The 9/11 certainly had its effect in Europe on how Turkey and other Muslim countries are perceived. In this sense Turkey belongs to “the wrong side” of the “world after 9/11”. But being a Muslim country is also viewed in favor of Turkey, as it could serve as a bridge between Europe and the Muslim world.

Dr Constanze Stelzenmüller argued that Germany is a key country in the process of Turkey’s accession for many reasons. First of all because of the long historical link the two countries have. Turkey and Germany are also important trading partners, and Turks living in Germany are the country’s biggest immigrant group. They make up 26 per cent of all immigrants in Germany. This means over 2 million people, and most of them belong to the second or third generation of immigrants. For Turkey, Germany is also therefore potentially the most important ally in Europe.

The integration of Turks in Germany has had some success in recent years. Many German-Turks have climbed high in the society, and are visible figures in politics, arts, sports etc. The cultural impacts cannot be underestimated.

There is still much to do for example in regarding social and economic position of Turks in Germany. The need for quantitative research inside the German-Turkish society, their socio-economical structure and the danger of isolation from the rest of the society, including health care and education, should be thoroughly investigated. Also a relatively low rate of the Turks living in Germany are German citizens, just about 200 000.

The identity questions are very crucial in Germany . There are differences in attitudes inside the political parties, as well as between them. Christian Democrats have traditionally concentrated on the essentialist debate, but there are members of leftwing parties with similar fears even if they are not shared by the party elites. The party lines are still unclear, and the debate far from transparent.

The positive side of the debate is that Turkey is paid serious attention by the German media and Germans are, perhaps slowly, developing a sympathetic attitude towards the Turks and Turkey. But many questions remain open, for example how much religious freedom should be allowed in the German society. This debate has much larger repercussions for Europeans, beyond the question of Turkey’s accession in the European Union.

In Dr Stelzenmüller’s believes Turkish diplomats could be more helpful in the process and think of the diaspora Turks, like the Turks in Germany, as an important asset for Turkey. Both sides have great advantages to be gained – Turkey could have an important ally in Germany, and Germany could, with the help of Turkey, come at ease with its multi-identity society.

Paavo Lipponen emphasized that the decision and commitment on Turkey’s accession to the EU was very clear, when it was made in 1999. The strategic importance of Turkey to Europe is crucial, for example in terms of energy, economic growth and the demographic aspect, as Europe’s population is declining. Finland has always had a positive approach towards Turkey’s accession. In Lipponen’s view, enlargement is the most important instrument the EU has in relation to its neighboring countries.

Conditionality, impact and prejudice in EU-Turkey relations: the variety of national debates (edited by Nathalie Tocci) is available in the internet:

Dr Nathalie Tocci is responsible for research on Europe at the Istituto Affari Internazionali in Rome, and Associate Editor of The International Spectator. She holds a Doctorate in international relations from the London School of Economics. From 1999 to
2003, she was researcher at the Centre for European Policy Studies (CEPS) in Brussels, where she worked in particular on EU-Turkey relations, the Cyprus question, as well as on conflicts in Southern Caucasus and the Middle East. Her current research
interests include European foreign policy, conflict resolution, the Middle East and the Mediterranean. Her latest publications include The EU and Conflict Resolution: Promoting Peace in the Backyard, Routledge, London, 2007.

Dr Constanze Stelzenmüller has been the director of GMF’s Berlin office since July, 2005. She was formerly defense and international security editor at the German
weekly DIE ZEIT, where, from 1998 onward, she covered a broad spectrum of issues, including NATO, European defense and security policy, military intervention in
Kosovo and Afghanistan, the war on terror, Iraq, international war crimes tribunals, German foreign policy, and U.S.-German relations. Dr. Stelzenmüller holds a
doctorate in law from the University of Bonn, as well as a Master in Public Administration from Harvard’s Kennedy School of Government; she was also a Visiting
Researcher at Harvard Law School. She has been a Remarque Fellow at New York University, a GMF Campus Fellow at Grinnell College, and a Woodrow Wilson Center
Public Policy Scholar in Washington, D.C. 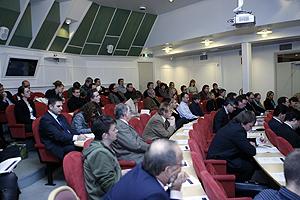 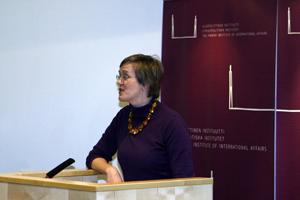 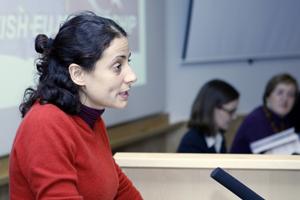 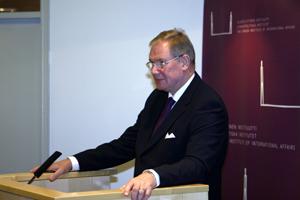