Restrictive measures have become an increasingly important instrument in the EU’s foreign policy toolbox. As a latest and strong example, economic sanctions against Russia are a key part of the EU’s response to the Ukraine crisis. In order to shed more light on the functioning of EU sanctions, the seminar will address the following questions: How to evaluate the effectiveness of EU sanctions, and how to improve the use of sanctions as an instrument to reach broader foreign policy goals? What are the political goals and effects of the EU’s sanctions against Russia? What are the conditions and prospects for the EU to ease or, on the contrary, further tighten the current sanction regime? How does Russia cope with the economic costs of the sanctions?

Dr Kristi Raik, acting programme director at FIIA’s EU programme, made the opening remarks for the event. Dr Raik noted that in 2014 the EU imposed comprehensive sanctions on a major international power, Russia, for the first time in its history. This, she argued, made the seminar particularly topical.

Dr Clara Portela (Singapore Management University) explained that comprehensive sanctions include the interruption of commercial and financial flows, whereas targeted sanctions focus on selected individuals and companies. According to Dr Portela, the EU’s sanctions regime became more sophisticated with time. During the Cold War, the EU made very limited use of sanctions. From the early 1990s until the late 2000s, arms embargoes and black lists of individuals were the main types of sanctions used by the Union. A qualitative change took place from the late 2000s, with the application of comprehensive, commodity embargoes against certain countries.

Dr Portela discussed the objectives and effectiveness of sanctions. According to her, sanctions can work at threat level too, before being actually imposed, as a deterrent for the potential target of the sanctions. Sanctions may have different objectives, such as changing the behaviour of their target, weakening its economic and military potential, deterring other countries from acting the same way and supporting allies or partners. Dr Portela argued that the sectoral sanctions imposed against Russia aim primarily at limiting its options for refinancing state enterprises and at decreasing revenues from the energy sector. The sanctions imposed on Crimea are part of a strategy of contesting the legality of its annexation to Russia. Furthermore, the targeted sanctions against individuals in the Russian establishment are meant to stigmatise their behaviour and policies in the context of the Ukraine crisis.

Russia responded by imposing counter-sanctions on agrifood imports from the EU. Stressing Russia’s international status and supporting its domestic production were the main arguments used by Russian policy-makers to support counter-sanctions. Dr Portela claimed that disturbing EU cohesion may be among the unspoken objectives of Russia’s countermeasures, as the latter affect some member states more than others.

According to Dr Portela, the effectiveness of sanctions has to be assessed in relation to the broader political strategy that they are meant to support. The sanctions against Russia are designed to alter its calculations and make its intervention in Ukraine more costly. In order to be effective, the imposition of sanctions has to be synchronised with the political strategy. Dr Portela also emphasised that sanctions should be accompanied by a communication campaign addressed to the domestic sectors which are most affected by the sanctions. Communication should also convey the idea that sanctions are reversible and can be scaled down if there is positive change.

Ms Terhi Hakala (Director General at the Department for Russia, Eastern Europe and Central Asia at the Ministry for Foreign Affairs of Finland) argued that EU sanctions against Russia were triggered by its annexation of Crimea. According to Ms Hakala, sanctions signal to Russia that its behaviour is unacceptable and that it should withdraw from Ukraine. She emphasised that sanctions are not intended to lead to a change of government in Moscow.

Ms Hakala stated that Russia was taken by surprise by the EU’s unity when the decision to impose sanctions was made. She argued that sectoral sanctions, particular financial restrictions, are proving effective in economic terms. They have not led to any substantial change in Russia’s policies in Ukraine but, in her opinion, they will eventually have the desired outcome. Ms Hakala emphasised that their impact has to be assessed in the long run, as the conflict is likely to last long. She also pointed out that more sanctions will be applied if the Minsk agreement is violated.

Dr Iikka Korhonen (Head of the Institute for Economies in Transition at the Bank of Finland) stated that the most effective sanctions are those related to the financing of Russian banks, defence and energy companies. According to him, sanctions worsened the effects of a crisis that was started by the decrease in oil price, a key source of revenue for Russia’s state budget. Dr Korhonen pointed out that the foreign debt of Russia’s corporate sector now exceeds the country’s currency reserves. Foreign companies based in Russia will be able to refinance their debt, as they are not affected by the sanctions. However, unless the oil price goes up again, Russian state-owned energy and defence companies will have no alternative to seeking the support of the Russian Central Bank. Dr Korhonen highlighted that the Russian financial sector is not sufficiently big to meet their demands.

Furthermore, Dr Korhonen argued that the sanctions and the Russian counter-sanctions affected EU member states differently. In 2014, the overall EU-Russia trade went down by 14%. However, while many countries registered a drop in trade, some (such as Lithuania) experienced a rise in commercial exchanges with Moscow. A larger decrease in EU-Russia trade is expected for 2015.

In the discussion that followed the panelists’ speeches, it was noted that sanctions may stay in place for long, and even be increased. However, it is highly unlikely that Russia will be excluded from the SWIFT payment system. This would have a strong effect on the Russian economy, but it would also politicise an institution that is meant to be impartial and induce other countries to create parallel institutions.

Finally, it was stated that in the short and medium run, the EU and Russia will remain economically interdependent. China-Russia commercial relations will intensify in the next years, but they are no replacement for EU-Russia trade in the short run. 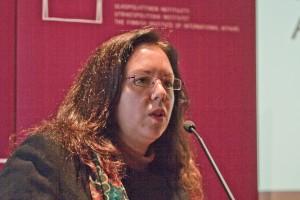 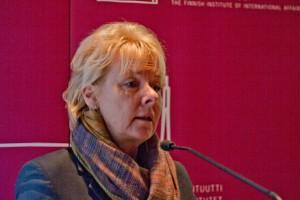 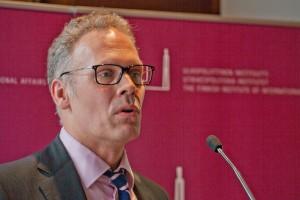 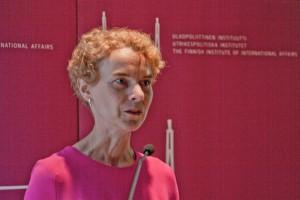 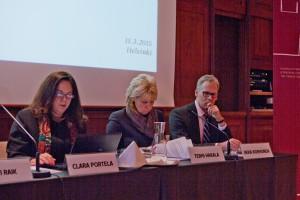