International crises and a leadership vacuum in Europe forced the economically strong Germany to learn how to lead the EU’s foreign and security policy and to become Europe’s new political engine. For example, Germany played a key role in the Western response to the Ukraine conflict. Berlin had to determine how to show more international responsibility, while adhering to its traditional foreign policy tenets. There is an active discussion on Germany’s unfamiliar role as a foreign policy leader and the implications for the EU’s foreign and security policy. How did Germany’s foreign policy and its role in the EU change in recent years? What are the implications for its partners in Europe and the Common Foreign and Security Policy? How can potential global ambitions in German foreign policy be reconciled with its European vocation? These and other questions will be discussed in the light of current international political developments.
The seminar marks the publication of the FIIA report ”Europe’s New Political Engine: Germany’s role in the EU’s foreign and security policy”, which presents the results of a trans-European research task force. The research project and this seminar have been organized in cooperation with the Konrad Adenauer Foundation.
Opening remarks: Teija Tiilikainen, Director, the Finnish Institute of International Affairs
Elisabeth Bauer, Head of the Office for the Baltic and the Nordic countries, Konrad Adenauer Stiftung
Speakers:
Thomas Bagger, Head of Policy Planning, German Federal Foreign Office
Niklas Helwig, Senior Research Fellow, the Finnish Institute of International Affairs
Lisbeth Aggestam, Associate Professor, University of Gothenburg
Comments: Antti Kaski, Director of Policy Planning and Research, Ministry for Foreign Affairs of Finland
Chair: Juha Jokela, Programme Director, the Finnish Institute of International Affairs
Summary of the seminar:

The seminar marked the publication of the FIIA report ”Europe’s New Political Engine: Germany’s role in the EU’s foreign and security policy”, which presented the results of a trans-European research task force. The research project and this seminar have been organized in cooperation with the Konrad Adenauer Foundation.

Teija Tiilikainen, Director of the Finnish Institute of International Affairs acknowledged the co-organizer for this event, the Konrad Adenauer Foundation, for their support and participation. Tiilikainen noted the Finnish-German cooperation during Finland’s EU membership and she also stressed the importance of German foreign policy research in Finland because of Germany’s role in EU integration. She noted the recently published report ”Europe’s New Political Engine: Germany’s role in the EU’s foreign and security policy”, edited by Senior Research Fellow Niklas Helwig, which she described as an academic scholarly work addressing a wide range of German foreign policy matters and actions.

The Head of the Office for the Baltic and the Nordic countries at the Konrad Adenauer Stiftung Elisabeth Bauer expressed the foundation’s enthusiasm to engage in this collaboration. FIIA will be a long term partner for the foundation as both organizations have similar research interests. Bauer also underlined the relevance of international cooperation that is now more important than ever. According to Bauer the report that consists of contributions by ten authors from seven institutions in Finland, German and Turkey has gathered a lot of positive reactions.

Niklas Helwig, Senior Research Fellow at the Finnish Institute of International Affairs, presented some of the key findings of the report. Helwig stated that there is a new demand for German leadership in foreign and security policy matters. The debate in Germany about its international responsibility is once again active. Helwig identified that Germany’s third period as a foreign policy actor has started. The first period took place in the 90’s, when defining decisions were made about Germany’s military role and its strong European vocation. The second period took place in early 2000’s, when the policy was more inward looking and Germany was focusing on the national economic situation and fostering trade relations. Finally, the third period started with the lonely abstention on the UN Security Council vote on a no-fly-zone in Libya in early 2011. Helwig describes Germany as adherent to its traditional foreign policy lines, for example regarding its commitment to multilateralism. However, other policies are changing such as Germany’s relation to the use of military power. German foreign policy has a pacifist identity with a strong faith in diplomacy as an effective tool in international relations. Germany’s foreign and security policy is trying to balance alliance responsibility with its tradition of military restraint. Germany also changed its Ostpolitik towards Russia which started to be more realistic in its assumptions and contingent on Russia’s respect of international law.

Germany is not successful in showing power, rather it functions as a political engine in Europe. It develops institutional structures and reaches out to partners for consensus-seeking purposes. Although the best approach for Germany is not a dominant one, it is currently hard to avoid due to a huge amount of pressure. Especially as there is no time for consensus-seeking or for an institutional approach. In his concluding remarks Helwig mentioned that Berlin tries to transform the current German moment in foreign policy to a European moment, albeit not necessarily to a moment for the European Union. In the end, Europe should be prepared for a situation where Germany is not as strong as it is now.

Thomas Bagger, Head of Policy Planning at the German Federal Foreign Office, stated that it is not always easy to understand the system when you are a part of it, referring to his work at the German Federal Foreign Office. The FIIA report in his mind had a balanced careful tone and did not try to present German foreign policy as having some grand strategy. However, he stressed that one should not underestimate the non-linear factors that affect foreign policy. Foreign policy developments represent a swinging pendulum rather than a continuous development. The effect of Germany’s abstention during the Libya crisis did not have a linear effect on the debate about international responsibility even though it was an important event at the time. While some of the elements of the new debate in Germany were coordinated – such as the speeches of German politicians during the Munich Security Conference in early 2014 – the debate as such was overdue.

On German leadership, Bagger argued that Germany did not choose to lead, but it chose how to lead. Bagger described Germany’s environment as ”surrounded by friends”. This geographic position has consequences for Berlin’s foreign and security policy: the threat perception is low. This thinking changed dramatically due to the Ukraine crisis. Now foreign policy is back again in the German media and the debate about German responsibilities is once again active. Bagger also addressed Germany’s Ostpolitik and its crisis management regarding Ukraine. He portrayed Germany as a ”chief facilitating officer”, playing the role of an honest broker in Europe. Germany is not suited for a ”normal” leadership style based on power. Rather, Germany should engage and have a dialogue with its surrounding countries. In other words, Germany should pursue a negotiating or consensus-like style of leadership. Due to Germany’s power position it has been invited to ”smaller groups” or coalitions of the willing, such as the P5+1, but Bagger reasoned that whilst these formats can be more effective they often lack legitimacy. In his concluding words, Bagger mentioned the ”German moment” and noted that it should rather be a European moment. The costs of non-Europe are especially high for Germany.

According to Lisbeth Aggestam, Associate Professor from the University of Gothenburg, Germany’s leadership is facing a paradox. On the one hand there are demands for more leadership effectiveness and on the other hand we have a challenge of leadership legitimacy. She noted that for EU foreign policy to work, Britain, France and Germany have to cooperate. Deeper cooperation or shared leadership has been seen as a good strategy, but the model is highly contextual. It might have worked regarding the Iran nuclear talks, but it did not work in all cases. Aggestam pointed out that trilateral asymmetries are the main reason why these three countries do not always agree among each other. They have divided views on foreign policy issues, which can be exemplified through France’s and Britain’s willingness to use more military instruments compared to Germany. Among other differing views on foreign policy, this leads to a complex leadership constellation, with little coherence between the three. Germany rose as an emerging engine for the EU’s foreign and security policy because of the role it played during the sanctions policy against Russia. On the role of the EU High Representative, Aggestam cited new empirical evidence from her research which shows that member states see the building of coalition rather than the involvement of EU actors as the best strategy to push the European foreign policy agenda. In her conclusions, Aggestam wanted to highlight that leadership is a social relationship, not primarily defined by power, but by the willingness of other actors to follow.  The role expectations Germany faces in Europe are thus a defining element of its ability to lead.

Antti Kaski, Director of Policy Planning and Research at the Ministry for Foreign Affairs of Finland, pointed to some of the findings from the report that he agreed with. First of all, Kaski noted that Germany’s role in trade and development policies should not be underestimated. He said that Germany was one of the few major players willing to deal with the banking crisis and the Ukraine crisis. The type of leadership that is applied by Germany is beneficial and it also fits with Finnish policies. According to Kaski it is easy to find overlapping interests of the two countries, for example on issues such as openness of global trade, human rights questions and climate change. Kaski also saw some challenges in the future regarding the EU’s new global strategy on foreign and security policy and its implementation, and pondered on Germany’s role this year. It is hard to find a leader for the EU, when the prospects for deeper integration do not look too promising. Kaski concluded that right now we are experiencing a European moment, not an EU moment. He hopes that Germany can bring it back. 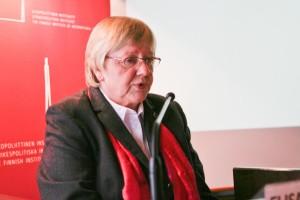 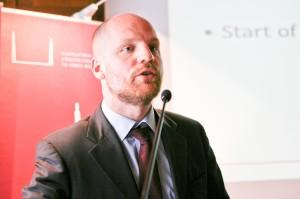 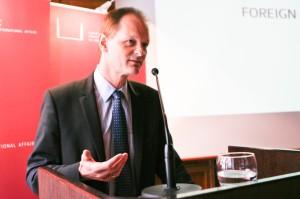 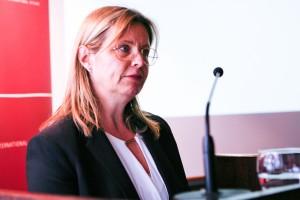 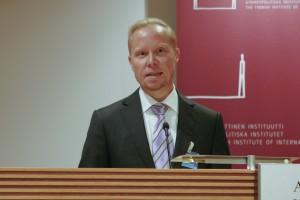