India is sometimes regarded as a potentially vital counterweight to China in the Indo-Pacific region. However, even though New Delhi has close security ties with the US and certain Asian countries, at the same time it exercises cautious restraint vis-à-vis Beijing. Tense relations continue in the South Asian neighborhood, with the long-lasting dispute between India and Pakistan over Jammu and Kashmir threatening to disrupt regional stability and security. In terms of global governance, India has stepped up its engagement and assumed a more active role in various international forums. One example of this is climate policy, where India has invested considerably in both financial and diplomatic terms. Furthermore, Europe has a high stake in good relations with India. India has had a strategic partnership with the EU since 2004, but its achievements have been underwhelming. While FTA negotiations have stalled and disagreements exist at the level of international issues, the EU recently published a revised strategy on India.

It is the aim of this symposium, consisting of two sessions including panel discussions, to examine these and other key elements of India’s foreign policy. The first session will explore how India situates itself within the emerging regional order and how it positions itself against the background of rising US-China rivalry. The second session will focus on relations with the EU, and assess whether the era of “benign neglect” between the EU and India is coming to an end. 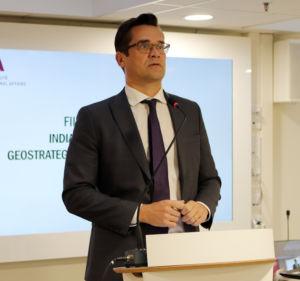 Mika Aaltola is the Director of the Finnish Institute of International Affairs (FIIA) and Editor-in-Chief of Ulkopolitiikka – the Finnish Journal of Foreign Affairs. Previously, Dr Aaltola worked as the Programme Director of the Global Security research programme at FIIA (2011-2019). His areas of expertise include US foreign and domestic policies as well as the international system and major-power relations. Aaltola is a professor (part-time) at the Tallinn University since 2012 and holds the rank of docent at the University of Tampere. He acted as visiting professor at the University of Minnesota (2006 – 2008) and as visiting fellow at Cambridge University in 1997. Aaltola has also been a visiting researcher at the Johns Hopkins School of Advanced International Studies (fall 2013) and at the CERI Sciences Po (fall 2010). He obtained his PhD in social sciences from the University of Tampere in 1999. 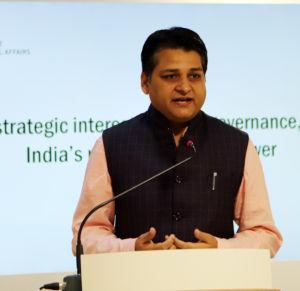 Harsh V Pant is Director, Studies and Head of the Strategic Studies Programme at Observer Research Foundation, New Delhi. He holds a joint appointment with the Department of Defence Studies and King’s India Institute as Professor of International Relations at King’s College London. He is also a Non-Resident Fellow with the Wadhwani Chair in US-India Policy Studies at the Center for Strategic and International Studies, Washington, DC. Professor Pant has been a Visiting Professor at the Indian Institute of Management, Bangalore; a Visiting Fellow at the Center for the Advanced Study of India, University of Pennsylvania; a Visiting Scholar at the Center for International Peace and Security Studies, McGill University; and an Emerging Leaders Fellow at the Australia-India Institute, University of Melbourne. Professor Pant’s current research is focused on Asian security issues. His most recent books include New Directions in India’s Foreign Policy: Theory and Praxis (Cambridge University Press) and India’s Nuclear Policy (Oxford University Press). Professor Pant writes regularly for various Indian and international media outlets including the Japan Times, the Wall Street Journal, the National (UAE), the Hindustan Times, and the Telegraph. 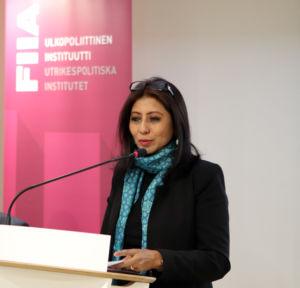 Ummu Salma Bava is Chairperson, Centre for European Studies, School of International Studies, Jawaharlal Nehru University, New Delhi, India. She also holds the Jean Monnet Chair on The EU, Security and Peace and Conflict Resolution. She has also been the Director for UGC Europe Area Studies Programme (November 2011-March 2014) and the Director for the Jawaharlal Nehru Institute of Advanced Studies (December 2012 –December 2014) at Jawaharlal Nehru University. Her are of expertise include European Union, India and German foreign and security policy. She has numerous publication and her latest include India and the Global Order: Negotiating between the Old and New Order, Sage 2018) and China, the European Union and the Developing World (Cheltenham, UK, 2015), She is also a member of the Research Advisory Council of Germany’s leading Think Tank - Stiftung Wissenschaft und Politik (SWP), Berlin, and member, Academic Advisory Board, German Institute of Global and Area Studies (GIGA), Hamburg, Germany. 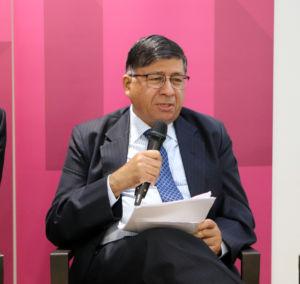 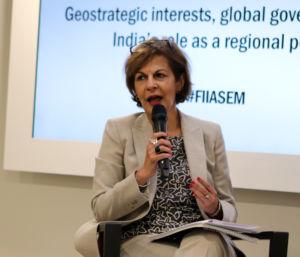 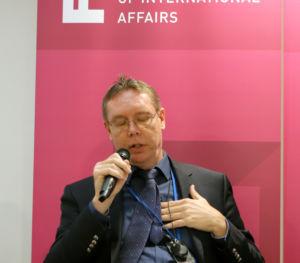 Olli Ruohomäki is a Senior Advisor with the Ministry for Foreign Affairs of Finland. Prior to the current assignment he was a Visiting Senior Fellow at the Finnish Institute of International Affairs. He has served as Charges d’affaires a.i., at the Embassy of Finland, Afghanistan, Deputy Representative of Finland to the Palestinian Authority in Ramallah and taken up special duties in Kosovo and the Middle East. He also has experience with the United Nations in war-torn Cambodia in the early 1990s. Dr. Ruohomäki received his PhD from the School of Oriental and African Studies, London.

India's relations with the EU

Shada Islam is responsible for policy oversight of Friends of Europe’s initiatives, activities and publications. She has special responsibility for issues related to the Future of Europe, Migration, the Asia Programme and the Development Policy Forum. Shada is Visiting Professor at the College of Europe (Natolin) where she teaches Asia-Europe relations and has been selected as a fellow by the Vrije Universiteit Brussel (VUB). She has been named as one of twenty most influential women in Brussels by Politico. Shada is the former Europe correspondent for the Far Eastern Economic Review and has previously worked on Asian and Migration issues at the European Policy Centre. She is one of the authors of Friends of Europe’s much-read “Frankly Speaking” commentary and is sought after as a speaker, commentator, columnist and moderator at high-level European and global events. Shada also continues to write on EU foreign and security policy, EU-Asia relations and trade and development issues for leading Asian, European and international publications and academic journals.

India's relations with the EU

Ari Tasanen is since October 2016 counsellor in charge of Finland’s relations to India in the Unit for South Asia at the Ministry for Foreign Affairs of Finland, Department for the Americas and Asia. During his long career he has worked in the Finnish foreign service in different positions mainly in two fields, security policy from arms control to European security structures (1984-2002), and EU and Europe policies (2002-2016), particularly bilateral and regional cooperation with a focus on Northern Europe. His most recent postings abroad include Finnish Embassies in Iceland and the Czech Republic. His first touch with Asian security issues was during Finland’s first EU Presidency in 1999 with regard to EU/Finnish participation in the ARF (ASEAN Regional Forum) and a seminar in Helsinki in 2000 transmitting OSCE-inspired ideas and best practices to ARF partners.