The Finnish Institute of International Affairs (FIIA) in cooperation with the EPC organised a Policy Dialogue From peace project to efficient peace-maker? Strengthening the EU’s mediation capacities at Sofitel Brussels Europe on Friday 16 November 2012.

The event marked the publication of the Finnish Institute of International FIIA’s report Strengthening the EU’s peace mediation capacities: Leveraging for peace through new ideas and thinking edited by Dr Tanja Tamminen and was held in partnership with the Finnish Ministry for Foreign Affairs.

Despite persisting internal difficulties, the European integration process can be considered a largely successful political project cementing a period of unprecedented peace and security on the continent – as recognised by the recent award of the Nobel Peace Prize to the European Union. Over the years, the EU has become increasingly involved in conflict management and peace mediation around the world, making it a true flagship of its post-Lisbon foreign and security policy. However, if the EU is to exploit its potential role as a mediator to the full, it needs to raise its political ambitions and strengthen its capabilities on the ground.

The global potential of the EU’s role in mediation, its achievements and problems, as well as its long and short-term priorities, was discussed by a high-level panel of policy-makers and experts, including Kimmo Kiljunen, Special Representative for Peace Mediation of the Foreign Minister of Finland, Tomas Henning, Division for Conflict Prevention, Mediation and Peacebuilding, European External Action Service (EEAS), Andrew Sherriff, Head of Programme, European Centre for Development Policy Management (ECDPM), Tanja Tamminen, Finnish Institute of International Affairs (FIIA), Fredrik Wesslau, Political Advisor to the EU Special Representative for Sudan and South Sudan and Alessandro Rotta, Advisor on Political Affairs of the EU Special Representative for Kosovo. The event was chaired by Rosa Balfour, EPC Senior Policy Analyst and Head of the Europe in the World Programme. 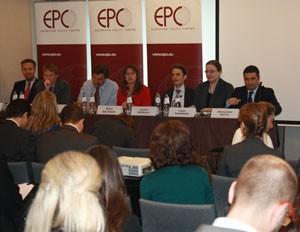 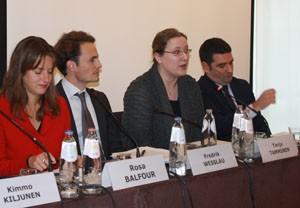