Do you have to be a regional power to count as a Great Power? It is often believed that having a regional power-base is an important stepping-stone to becoming a major power in the global system. Such ideas have figured prominently in the history of the rise and fall of Great Powers. As such, it is believed that the major players in today’s emerging global order are, or will be, regional powers and that their ‘regionness’ is in some way a natural part of their global role. Hence, too, it is common to assume that the commonly identified regional powers of today – India, China, Brazil, South Africa, Russia – are in fact already Great Powers or well on the way to becoming so. This lecture will discuss this presumed linkage and challenge this conventional wisdom. It will argue that, historically, it is far from clear that being a regional power has been a necessary or desirable route to Great Power status. And it will look at the variation across regional powers in how they manage the balance between their regional interests on the one hand and their global ambitions on the other.

Summary of the seminar:
The event was opened with short remarks by its chair Dr Mikael Wigell who stressed the importance of the topic and said that this seminar is the first of a series of events that the Finnish Institute of Foreign Affairs will organize as part of its new research project, pursued together with its international partners, on regional powers’ geo-economic foreign policy strategies.
Keynote speaker of the seminar Dr Andrew Hurrell focused on exploring the links between regional and global power roles and questioned the idea that a country must be a regional power to count as a global power. Historically, being a regional power has been seen as a precondition for global power status. This according to Dr Hurrell is not totally untrue nowadays either – yet, the question is far from simple, because first of all, counter-examples exist: the British Empire, for instance, was a global power without holding the status of a regional power. Also, the US did not see it necessary to involve itself deeply in the region and has been content with ignoring it, so as to be able to focus on projecting power further ashore. It has been able to dominate the region, without putting much effort into it. The strategy is visible in its relationship with Mexico, where the US is able to limit and control its involvement without becoming too connected to Mexico.
Dr Hurrell remarked how some think that if a country has the possibility to control the region, it should do it. But often a country is pulled by others into the position of a regional power. Brazil and India, for example did not actively try to achieve this status, and has often wanted to ignore their respective regions. Nevertheless, they have been ”pulled in”.  Dr Hurrell further remarked how, in our nowadays hybrid world, power is also defusing and moving to emerging countries and to countries that are not before seen powerful and how also geo-economics pushes these countries and complicates their capacities. Here, institutions have a significant role to play in the power division. Dr Hurrell said that institutions can stabilise the crisis of a frustrated regional power seeking influence in the region. These crises can be avoided or solved with the help of institutions, and in general, institutional agreements are seen as a better way to live with a powerful country than no agreement at all: an example is the institutional agreement between the US and South America.  Dr Hurrell mentioned though that sometimes, even though the multilateral institutions are appreciated, the regional ones are not seen as important.
Dr Raimo Väyrynen commented on the presentation of Dr Hurrell, agreeing with him over the less than simple link between being a regional power and global power. In the past the relationship between regional and global power status has been taken as obvious – it was considered that if a country is not a global power, it is weak in its own region. A strong state is a precondition for a regional power but overall a country can be a global power without being a regional power such as in the cases of US hegemony and British Empire – as also mentioned by Dr Hurrell. Dr Väyrynen also contemplated if nowadays the regional emerging countries create fear.
Dr Pami Aalto concentrated in his comments on Russia. Dr Aalto has formed a model that explains the structuration of Russia’s geo-economy. In this model there are four dimensions: resource geographic, financial, institutional and economic dimensions. By using this model he explained the structuration of Russia’s geo-economy, and according to Dr Aalto in all four dimensions, there are both enabling and constraining factors.
In the end the floor was open for questions and comments. These concerned the status of both regional and global powers and roles of different countries. 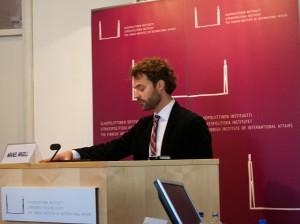 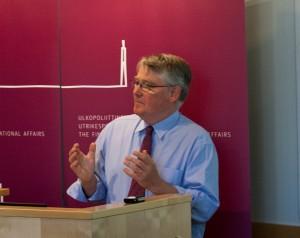 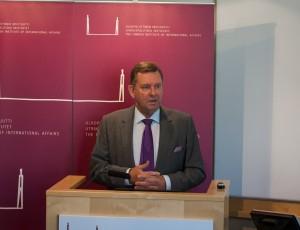 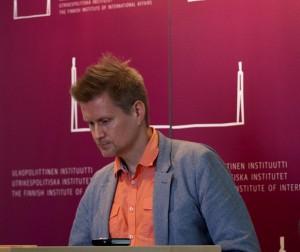