Six years have passed since the turbulent Copenhagen climate meeting, and soon it is time for world leaders to try to infuse the global climate talks with new momentum in Paris. Climate change is a global phenomenon that requires collective ambition and coordinated action, based on an international agreement that all states consider to be fair and that allows them to pursue their own development goals. To enable global action on climate change, the Paris meeting of December 2015 is set to decide on crucial issues such as financing and transparency. By collecting, processing, and sharing information on country and collective mitigation implementation, a well-constructed transparency system could be a key enabler for building trust in collective action among countries. Other key issues must also be addressed in the follow-up process. How will Parties revise their contributions? How will progress in cooperation on all elements of the agreement, including finance, be reviewed?

Mika Aaltola, Director, Global Security Programme, The Finnish Institute of International Affairs introduced the topic of the seminar and the speakers.

Spencer saw the climate meeting in Copenhagen as successful. Several important decisions were taken in Copenhagen, e.g., voluntary pledges by industrial countries, 2 C degrees limit of global warming and a transparency mechanism. The Cancún meeting formalised the decisions. However, the Copenhagen mitigation action targets were not sufficient and the voluntary regime did not satisfy all the parties. It was also unclear what should be done after 2020.

The Durban meeting in 2011 offered a more precise negotiation mandate. The ambition from the beginning of the meeting was to achieve a global legally binding agreement which was not the case in Copenhagen. In 2013, it was agreed that all countries would report their mitigation pledges, their Intended Nationally Determined Contributions (INDCs), before the Paris meeting.

The present situation ahead of the Paris conference, in comparison with the situation prior to Copenhagen, is much clearer and better structured in terms of ambitions. The French presidency found elements of convergence in their informal consultations in June 2015. The draft agreement is already in good progress and it is a relatively short text. Before Copenhagen, the draft text contained 200 pages with thousands of brackets. The Copenhagen draft agreement was also rejected 6 months before the meeting.

The issue of differentiation of contributions to mitigation action remains challenging to resolve. The Chinese-American joint statement on climate change from November 2014 was a breakthrough in this respect. Not only traditional industrial countries but also other countries can contribute according to their individual capacity and conditions.

The coming climate agreement needs to be flexible over time, unlike Kyoto. It should be able to take into consideration changes in the future and ambitious negotiations starting after Paris. Views on a dynamic agreement have developed positively during the last six months.

Parties still have different views on climate finance, particularly on private sector finance. Purely commercial investment from developed countries to developing countries should not be counted, but the ”public money only” mindset needs to be discarded.

Spencer explained in more detail the positions of USA and China. The Obama administration has been very active and taken the lead in the climate negotiations. The American INDC is feasible under existing legislation but due to interior political reasons, it is demanding to get an approval for a climate agreement in the USA. However, in November 2013, the United States ratified the Minamata Convention on Mercury by sole executive agreement by President Obama, without the Senate’s consideration. The President did this unilaterally because compliance with the Convention did not require any change in U.S. law. The climate agreement can also be ratified by sole executive agreement by the president if it doesn’t require further work with the legislation in the Congress.

China is repositioning geopolitically and is more proactive in climate negotiations. On a domestic level, air pollution and public health have become a huge issue that the communist party is taking seriously. Energy security is a second major driver. National sovereignty in the context of the climate negotiations is still an issue for China but it does not necessarily hinder them from signing an agreement in Paris.

The Chinese-American joint statement on climate change would have been unthinkable still five years ago. The Chinese Premier is going to visit the U.S. again at the end of this month and it is possible that a new climate statement will be issued then.

Norma Pensado, Ambassador of Mexico to Finland gave an overview of the Mexican preparations for the Paris Climate meeting, on a national and regional level. Paris is a milestone in multilateralism. Mexico expects deep decarbonisation of development. Mexico is an oil exporting country, but it is expecting an agreement for all parties in Paris. There is a need for a strong political agreement that has a dynamic system allowing gradual steps towards the agreed aim. Mexico’s objective is to promote a global competitive economy that is also sustainable. Mexico wants a legally binding instrument, according to the conditions of each country. All countries need to take action, but their different capabilities have to be taken into account. Mexico works closely with the Independent Association of Latin America and the Caribbean.

The floor was then opened to questions and discussion. Several issues were discussed and among them the positions of Australia and Canada. The governments of these countries don’t have climate negotiations as a top priority. Canada and Australia will probably agree to a global agreement in spite of climate sceptic governments. They have been surprised by U.S. actions. Carbon pricing was also discussed. It is difficult to negotiate carbon pricing on a UN level. Domestic measures count more in the carbon bubble discussion. Finally, the 2-degrees goal and its achievability were discussed. With very ambitious modelling assumptions it is still possible to achieve, but in reality it will be very difficult. 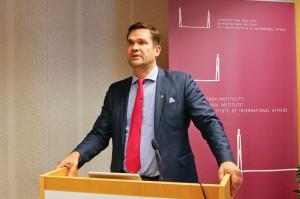 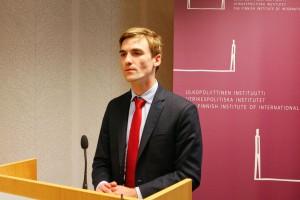 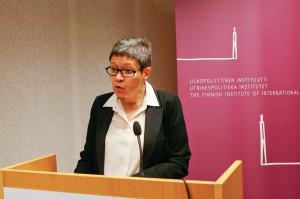 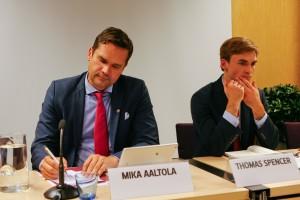