Twenty years ago, the United Nations Conference on Environment and Development, also known as the ‘Rio Conference’ or the ‘Earth Summit’, brought together over 30,000 people, including Heads of States from over 100 countries. Although the conference was not an unequivocal success, and already showed signs of the tensions between developed and developing countries that would persist for the years to come, it was a milestone in the development of modern international environmental law and governance.

Twenty years later, the situation looks different. A series of financial crises has casted environmental issues to the background of national and international political agendas, increasing the anxiety about the effects of environmental law and policy on economic growth. Optimism about tackling environmental problems through multilateral negotiations has given way to scepticism. Another major development has been the geopolitical power shift, with emerging powers like China, India and Brazil taking on an bigger role in world affairs. What is the way forward? The Global Politics of Sustainability seminar aims at identifying key challenges and opportunities, and reflecting the emerging new global order.

This seminar focused on the Rio+20 conference that will be held in Rio de Janeiro in June 2012. In her opening remarks, Teija Tiilikainen, the Director of the Finnish Institute of International Affairs, introduced the audience to some of the questions surrounding the Rio+20 conference. She mentioned the question of balancing the different parts of the conference agenda, the institutional framework of sustainable development, and the challenges of political commitment. She also told about the Finnish Parliament’s plenary debate on the topic of Rio+20, taking place in the afternoon of that same day, and where Minister Ramesh was also scheduled to speak.

H.E. Shri Jairam Ramesh, the Indian Minister of Rural Development, was the keynote speaker. Minister Ramesh is an economist and a member of the High-level Panel on Global Sustainability that is preparing the upcoming Rio conference. His speech revolved around three main points: the domestic roots of sustainability, the need for a pragmatic approach, and the economic factors in determining commitments.

Minister Ramesh was pleased with the theme of the seminar being the politics of sustainability, as sustainability is all about politics. In his view the difficulty with international agreements is that countries are reluctant to take on measures that they fear would infringe on their national sovereignty. For countries to make political commitments in the field of sustainability, these commitments must be domestically feasible. This is a challenge that the High-level Panel on Global Sustainability set out to tackle when it was founded. The Panel recently submitted its report on the issue to the UN Secretary-General.

To achieve a degree of political acceptance for sustainability, both in the domestic context and internationally, an approach must be adopted that is more pragmatic than “evangelical”, Minister Ramesh further argued. As a model of successful international cooperation, he cited the Montreal Protocol on ozone depleting substances, and called for a series of incremental steps in areas where there is already broad agreement. This way some sort of consensus can be reached. In the meantime, the state of the European economy and the political situation in the United States make it difficult to obtain concrete results, so an all-or-nothing attitude to negotiations is a mistake.

Minister Ramesh criticised the negotiations of the last 20 years, especially on the issue of climate change, for a lack of discussion on economic criteria. He said that countries cannot be expected to make sacrifices that will be detrimental to growth. They should therefore be able to assume responsibilities that are commensurate with their level of economic development measured by per capita income. The Minister also stressed the significance of sustainable production and consumption patterns, both between and within countries. The minister praised Finland for its initiatives in the field of water, and talked about the need for similar efforts in other fields: energy, food, and particularly transport.

Next, Finnish Minister for International Development Heidi Hautala presented her comments. She agreed with Minister Ramesh on many points, such as the Montreal Protocol being a model. Minister Hautala emphasised the power of industries and lobbies. According to her, the transparency of e.g. the WTO must be improved, because industries are not always in line with sustainability.

Finland’s position is that the architecture of the UN organisations should be strengthened in two ways, Minister Hautala explained. Firstly, replacing the Commission on Sustainable Development (CSD) by a stronger entity, as when the UN Human Rights Commission was succeeded by the Human Rights Council. Every country would thus be submitted to an international evaluation. And secondly, assigning more tasks to the ECOSOC branch of the UN.

Referring to the next speaker Mr Dusik, Minister Hautala expressed Finland’s support for the upgrading of UNEP. To move forward in global sustainability, everyone must understand the benefits of green economy: for instance resource efficiency is good for business and for national economies, she reminded. The decoupling of growth and resource use is essential in discussing green economy in Rio+20. Good governance of natural resources is a focus area of Finland’s new development policy programme, as are climate justice and equity.

Minister Hautala sees great value in partnerships in solving global problems. Governments, businesses and civil society can address issues like water and sanitation together. She envisioned that some of the issues mentioned by Minister Ramesh – water, food, energy, and transport – could be part of the Sustainable Development Goals (SDGs) recommended by the High-level Panel.

Minister Ramesh responded to Minister Hautala’s comments by saying that SDGs are unpopular, but important. The so-called Millennium Goals are only for developing countries, whereas SDGs are for all countries, the minister remarked. Identical goals do not have to be imposed on each country, but countries should be held accountable after adopting a set of SDGs. Minister Ramesh agreed with the dismantling of the CSD, but questioned the usefulness of a UNHRC type of architecture that some countries would see as a threat to their sovereignty. In response to this, a member of the audience pointed out that the idea would be to emulate the procedure that was adopted in the transition to the Human Rights Council, not the functioning of the Council itself.

Last to take the platform was Jan Dusik, Deputy Director and Officer-in-Charge of the UNEP Regional Office for Europe. He talked about the experience of 40 years that UNEP can offer to the Rio process, and the important work done both by the High-level panel and by Finland for sustainability. What is needed, he said, is abandoning the idea of the environmental, the social and the economic as three separate pillars. The homework of sustainability is to have the ministers of environment and their colleagues brought in in the domestic debate before the international negotiations. He emphasised the national and subnational levels in sustainable development governance.

UNEP is part of the UN secretariat. It will not be negotiating the outcome of the Rio conference, but will be explaining different options in order to assist governments in understanding important concepts, providing evidence of how green economy can work in various settings, and deal with fears related to green economy, Mr Dusik explained.

Mr Dusik then shared his views on some of the themes of the green economy debate. Would it be easier to get rid of fossile fuel subsidies, if the international community worked together, he asked. He mentioned water quantity and quality, transboundary waters being an issue which shows the importance of cooperation between countries. Questioning the concept of GDP as a measure of happiness, Mr Dusik suggested looking for alternatives to it. He also stated that the development agenda does not contradict the environment agenda, rather the two complement each other.

Another important topic for Mr Dusik is the institutional framework for sustainable development. He stressed the importance of explaining the differences between the CSD, the SDC and other such abbreviations, so that topics discussed in Rio can be understood and accepted by the general public. According to him, the 10 Year Framework Programme on Sustainable Consumption and Production proves that the Commission needs restructuring, and the programme should be approved in Rio. Something that has changed significantly since the last Rio conference in 1992 is that public participation and engagement of major groups and stakeholders is much stronger, which Mr Dusik sees as a positive sign. He talked about problems with UNEP governance, like the absence of universal membership, and said that UNEP would need more authority in decision-making. The option of UNEP becoming a UN Specialized Agency (UNEO) is made difficult due to opposition from the United States, however there is the alternative of a non-treaty establishment, Mr Dusik estimates. Another problem the organisation faces is lack of finances.

Finally, on the issue of SDGs, Mr Dusik agreed that their universality is an advantage compared to the Millennium Goals. He concluded by saying that we need decisions that go beyond environment ministers and an approach that will motivate leaders of countries to attend the coming conference.

A discussion ensued, with questions and comments from the audience. Regarding the SDGs for India, Minister Ramesh told that reducing the emissions intensity of the country’s GDP, increasing the share of  public transport and improving water use efficiency have already been announced as national objectives. Concern was voiced over the risk of the environmental and climate component of sustainable development being forgotten in Rio+20, and on the insufficiency of incremental change, considering the vulnerability of the planet. Minister Ramesh accused the United States of being a model of unsustainability. He acknowledged the problem of planetary boundaries, but repeated his call for realism and said that everything must be understood in the context of development and people aspiring to prosperity. Minister Hautala also shared her vision about the SDGs: new indicators for measuring welfare and equity, climate resilience, energy, and women in decision-making were on her list. 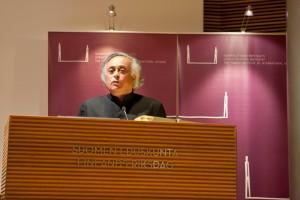 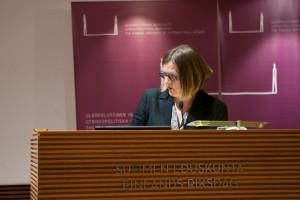 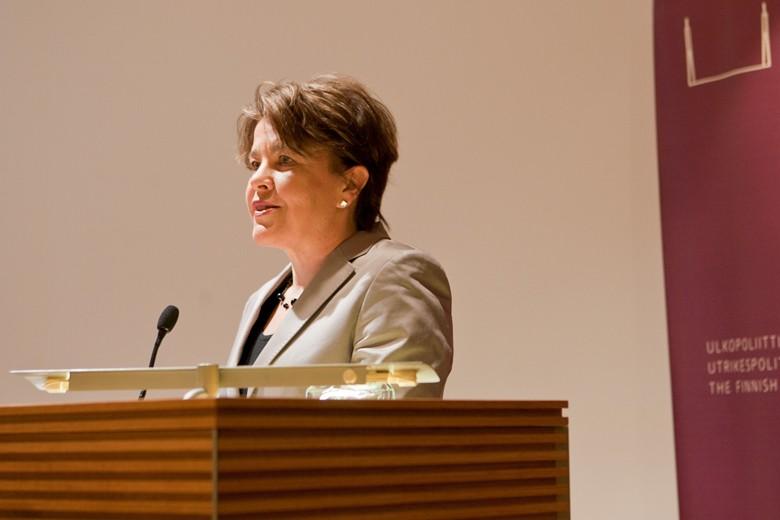 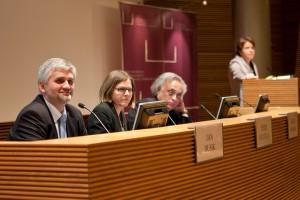 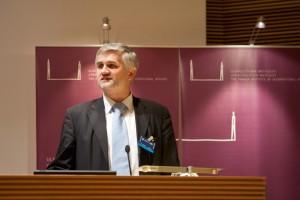