UPI-FIIA’s Iran Working Group had the pleasure of being addressed in its fourth session by Dr Mustafa Alani from the Gulf Research Center, Dubai. Dr Alani’s message to the audience was strong and clear: The states of the Gulf Cooperation Council cannot accept Iran’s regional ambitions as they perceive them under any circumstances. The six Arab states in the Gulf would even prefer a United States military attack on Iran over having to live with Iran as a nuclear weapons state.

Relations between the GCC countries and Iran

According to Dr Alani, the relations between Iran and the six Gulf Cooperation Council member states (Bahrain, Kuwait, Oman, Qatar, Saudi-Arabia and the United Arab Emirates) are characterized by a general mistrust and a lack of confidence that can be traced beyond Iran’s new role in the region and beyond the Islamic leadership, back to the seventies when all Gulf Cooperation Council (GCC) states, except for Saudi Arabia, gained their independence. During this decade, Iran pursued an aggressive policy towards the newly-founded states and the Shah of Iran declared himself the “policeman” of the region. Iran occupied three islands which were part of the United Arab Emirates and declared Bahrain as part of its territory. After the Islamic revolution Iran provoked sectarianism in the region by supporting Shia minorities in other Gulf States against their governments.

As a result, the GCC-Iran relationship has for long been characterised by distrust. The GCC countries have come to believe that Iran aims to establish hegemony over the region and they therefore feel they are in need of external protection provided by the United States, whether they like it or not. Despite the high defence budgets, GCC states still lack a sufficient defence capability, as was seen in the case of Kuwait in 1991.

Iran’s ambitions as perceived by the GCC states

During the last decades, the GCC states have established good economic relations with Iran but they are left in the shade of two nightmare scenarios which, according to Dr Alani, are Iran as a nuclear power and Iraq under the control of Iran.

The war in Iraq has changed the regional security balance. This new situation, according to Dr Alani, is acceptable to the GCC states, but they do not want Iran to take the next steps in its nuclear programme. Dr Alani believed that conflict with the Iranians is unstoppable. Iran aims to establish its control over Iraq –without occupation– and create a satellite state resembling Lebanon in relation to Syria before 2005. This would of course undermine the security and stability of the neighbouring states.

Dr Alani reminded the audience that the Gulf region is of global strategic importance because of its energy resources and in this context Iraq as an Arab country is of major regional importance. Up to 2003, Iraq had acted as a security barrier for the Gulf Arab states against Iran. The United States is now carrying out its sixth security plan in Iraq which undoubtedly is its last chance. If the plan is not successful enough and, as a result, the United States withdraws from Iraq, this will lead not only to an Iraqi civil war but to a “regional civil war”. Here the determination of the leaders of the Arab countries in stopping Iran from seeking influence over Iraq should not be underestimated.

The Iranian nuclear programme, which was established in the 1960’s as a research programme, has been a concern for the GCC states only since 2002 when the advanced state of Iran’s nuclear programme was discovered. The GCC countries are convinced that Iran has already taken the decision to produce nuclear weapons. All Gulf states are signatories to international treaties against nuclear proliferation and weapons of mass destruction and it now seems that Iran aims at destabilising the current regional security balance. Iran is seen by them as an aggressive and expansionist state which, if equipped with a nuclear capability, would constitute a major challenge for the other Gulf states.

Possible roads for the GCC

There are, according to Dr Alani, two possible roads for the GCC countries to take to try to balance a nuclear Iran. Firstly, the GCC countries could develop their own nuclear capability, which would take time, or secondly they could “borrow” the nuclear umbrella of the United States. The latter is not a desired option due to the anti-American sentiment amongst local populations.

If in spite of the international collective pressure, Iran still insists and goes ahead with its nuclear programme there are again two options for the GCC states: either living with an Iranian bomb or military action. Although the GCC obviously would prefer a diplomatic solution and wants to give it a chance, in case all the efforts fail, Dr Alani asserted that the U.S. or Israel do not need permission from the Council states to attack, nor their help. The GCC states themselves would not participate in an attack of this kind.

Dr Alani believes that Iran’s capabilities would not be particularly effective at deterring an assault, for example with regard to air defense. The only effective means Iran has for responding to an attack are military retaliation, including closing the Strait of Hormuz and controlling flows of petroleum, and non-military retaliation such as intelligence operations and terrorism. According to Dr Alani, even these are manageable risks which the GCC countries could live with.

Dr Alani did not speak with positive words about the Baker-Hamilton Report which encourages the U.S. to engage Iran. The GCC countries are wary of the term engagement and do not want bargaining behind their backs, as has happened in the past. Therefore they support the current U.S. policy of the containment of Iran across the entire Middle East. Presently, an alliance is emerging among the Arab countries of the region that are all are opposed to a nuclear Iran. The only country left on Iran’s side is Syria of President Bashar al-Assad which is now isolated, economically weak and under international pressure because of the Hariri tribunal.

According to Dr Alani’s analysis, there are three possible ways in which the U.S. could conduct an attack against Iran. One option is surgical targeted attacks on two to four key nuclear installations which would include at least Natanz and Arak. Another option could include military strikes conducted in a staged way starting with air bases, anti-air capabilities and radar systems and then striking the actual targets. The third option is to destroy the retaliation capabilities Iran, namely its Shahab missiles, bases, and control systems. The fourth option is a huge comprehensive air attack that is the only option that Dr Alani considered cannot be legitimized. He also believes that, unlike in Iraq, the U.S. will not aim for a regime change or an occupation of Iran.

The Cooperation Council for The Arab States of the Gulf: http://www.gcc-sg.org/eng/index.php 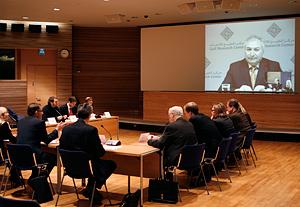