The year 2010 has become a turning point for Russia’s foreign policy. Changes within the country and, especially, in the international sphere have been building up for a long time, but now several processes have intersected and produced a transition to a qualitatively new level. Major global actors have finally recognized that Russia has priority interests in the former Soviet Union, Russia’s policy has turned towards Asia and Russia has been rethinking its relations with Europe. Everything happening now is a result of fundamental shifts in the world order, which were set off by the end of the Cold War’s ideological standoff. However, their end – just as the expected configuration of the future international system – is still nowhere in sight.

Mr Fyodor Lukyanov has been editor-in-chief of the journal Russia in Global Affairs since its founding in 2002. He is an experienced journalist and political analyst who has in the past worked for different Russian newspapers, television and radio stations. Mr Lukyanov is also a regular contributor to international media.

Dr Arkady Moshes welcomed everyone to the seminar with the topical theme of “is Russia a global power?” Dr Moshes emphasised the importance of the criteria of how we define a global power. He expressed his delight to have Mr Fyodor Lukyanov, the founder and editor-in-chief of the journal Russia in Global Affairs, sharing his insights and analysis on the topic.

Mr Lukyanov began by introducing his background as a journalist and stated that in his presentation he would try to understand the current atmosphere in Russian foreign policy and its dynamics. He argued that the post-Soviet period is coming to an end. Major global actors have admitted that Russia has special interests in the post-Soviet space, but on the other hand, Russia’s capacity to pursue those interests is limited. At the same time, Russia has started to develop its Asian strategy, where it has growing concerns. The country is also rethinking its relations with the EU. According to Mr Lukyanov, the EU is no longer as essential in Russia’s foreign policy as it has been. From the Russian point of view the EU – Russia relations are not as much strategic as before but more of a socio-economic nature, meaning that the relationship is becoming more and more practical. Mr Lukyanov stated that the EU’s status as a foreign policy actor will diminish in the future and that the EU is likely to focus more on internal factors.

Mr Lukyanov went on to note that the changes in the current global order have also led to a shift in Russia’s foreign policy debate. The dominant factor in Russia’s foreign policy now is the growth of Asia and especially China. The US-Russia relations are becoming more important again because of China. President Obama’s reset policy has been largely successful but although the relationship between the US and Russia is now back on track, according to Mr Lukyanov a totally new agenda is needed. The US-Russia relationship reached its peak in the summer, when President Medvedev visited Washington. Mr Lukyanov stated that we now have to wait a few years to know what will happen after both countries have had their elections. The relationship with Asia determines to a great extent what will happen between the US and Russia. The political atmosphere between Russia and China has changed but the main problem between the two countries is the growing economic disparity in favour of China.

Although Russia is paying more attention to Asia, the post-Soviet region remains its main priority. At the moment, the region is a peripheral area that the world’s major players are not paying attention to but where Russia has new opportunities. Mr Lukyanov also stated that Russia needs a new framework of institutions as the old ones do not work when resolving serious problems. Therefore there is an important need for a new basis for these organisations. In Mr Lukyanov’s opinion, breakthroughs with the issue of the customs union cannot be expected in the near future, nor any major changes in Russia’s willingness to join the WTO.

The modernization debate is at the locus of everything in Russia, including the country’s foreign policy. Mr Lukyanov noted that although it will not determine Russia’s relations with the rest of the world, there is now a better understanding of Russia’s limited capacities. Russia is surrounded by Asian and European countries that are more successful than Russia itself. President Medvedev has also mentioned that Russia needs to change its attitude towards Asia.

In the Q&A session it was inquired what the current situation between Russia and Belarus is, as the relationship is not as good as it has been before. Mr Lukyanov replied that at the moment a strange situation has developed: the countries are close allies, but the personal relationship between Putin and Lukashenko is bad. The coming presidential elections in Belarus will be crucial in many ways. Despite personal animosity between the two leaders, open confrontation is not likely.

The following issue raised from the audience was about Russia’s role in international development policy. It was stated that Russia is now more interested in taking part and it wants to increase its assistance to neighbouring countries especially. Russia is concerned about China’s involvement in the region and that is why it wants to be more active also in that regard.

It was also inquired how the relationship between Russia and Georgia is likely to develop. In Mr Lukyanov’s opinion the relationship is not only about the persons, Putin and President Saakashvili. At the time of Saakashvili’s departure some kind of formal talks may take place, but it does not necessarily mean a significant change in the situation. Any comprehensive solution is unlikely to be found on a bilateral level.

Dr Moshes noted that in his presentation Mr Lukyanov focused rather on Russia’s foreign policy concerns than achievements. Dr Moshes argued that there will have to be a strategy and practise on how to address these concerns or Russia’s foreign policy will face major problems. According to Dr Moshes the Post-Soviet period is not yet over as there are still old sensitivities and common challenges that have not been solved. He also claimed that the United States are the only global power in the world at the moment. The US has an ability to set up the discourse and it has the understanding of its global responsibility. Dr Moshes was emphasizing that we should still be cautious, when talking about superpowers.

It was argued from the audience that Mr Lukyanov underestimated the modernization process and its role in foreign policy, because it has the lead in the opening of the society. Mr Lukyanov admitted that modernization can change a lot but that it should happen through domestic transformations. It was also discussed whether there are other alternatives to Russia’s development than opening up and integration. Mr Lukyanov stressed that opening up is the only alternative and that it will happen sooner or later but not without political discussion with other countries. 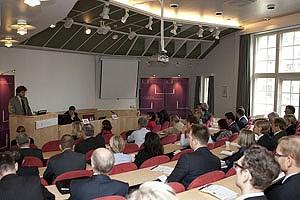 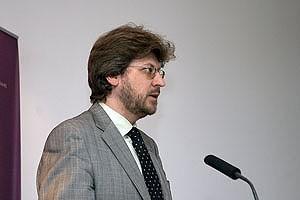 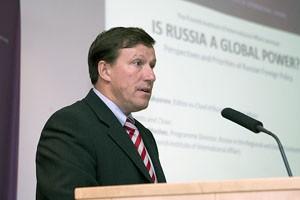 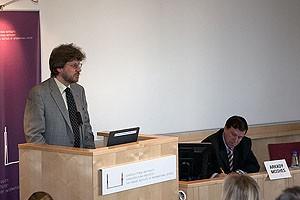