For the past 70 years, the U.S. government has assumed that Japan’s security policies would reinforce American interests in Asia. The political and military profile of Asia is changing rapidly, however. North Korea’s missile and nuclear programs, China’s rise, and the relative decline of U.S. power have commanded strategic review in Tokyo just as they have in Washington. What is the next step for Japan’s security policy? Will confluence with U.S. interests– and the alliance– survive intact, or will it be transformed? Will Japan become more autonomous? Professor Samuels will explore how changes in the regional security environment have intersected with changes in domestic Japanese politics to shape Japan’s grand strategic choices. 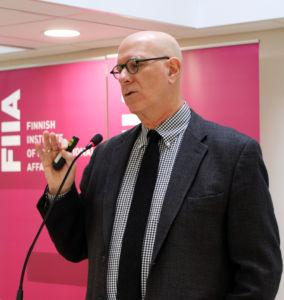 Professor Richard Samuels built his argument in three parts: Japan’s post-war past, its present, and possible future scenarios. Samuels described the past as “cheap riding –not free but cheap – realism”. Then Japan relied on US support for its security and tried domestically to prevent sliding down the slippery slope back to pre-war nationalism. Japan decided not to have nuclear weapons, though they reserved the right to do so, kept its defence budget under 1% of the GDP, and promoted an image of “warm-hearted” Self-Defence Forces.
However, Samuels illustrated with several examples how Japan has since the 1980s been cutting “slices off the pacifist loaf”, for example by dispatching its Maritime Self-Defense Force after 2001 for refueling missions in the Indian Ocean in support of US-led operations in the wake of 9/11 and acquiring offensive capabilities.
This trend has intensified in the 2010s, so that the present is characterized by such new developments as Japan’s participation in anti-piracy missions, a naval facility in Djibouti, an increase in the size of its submarine fleet, entry into the global arms market, and making collective defence constitutionally acceptable. According to Samuels, this is the result of Japan’s domestic landscape where the “normal nation”-alists have consolidated power while the Left has largely disappeared. At the same time, the rise of China has shifted the balance of power both globally and regionally. Also North Korean missile capability, as well as the fear of North Korean ability to drive a wedge between Japan and the US under the Trump presidency, have heightened the need for Japan to become a “normal nation” with credible defence capabilities.
The future of Japan’s grand strategy depends on the implications of China’s rise on the one hand, and the US relative decline on the other. Since Japan cannot be sure of the future, it is hedging its bets, argued Samuels. This leads to four different basic scenarios. First, Japan could “hug” China and distance itself from the US, no longer being a yes-man for the US interests. Samuels noted that Japan took steps in that direction in 2009 under the Hatoyama administration, but failed. Second, Japan could hedge against China’s military and US economic hegemonies. According to Samuels, Trump’s actions have indeed pushed Japan closer to China on the economic front. Third, Japan could hug the US and distance itself from China. Until Trump’s declaration of trade war, this had been Prime Minister Abe’s first choice, said Samuels. Fourth, Japan could distance itself from both China and the US and develop autonomous defence, including nuclear weapons. This would be a mistake, concluded Samuels. 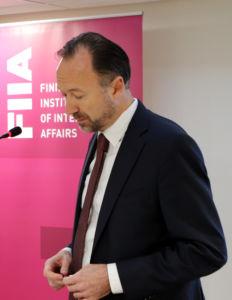 According to Senior Research Fellow Bart Gaens who was invited to comment on Samuels’s presentation first, Abe’s role in the recent changes should not be seen in isolation. Japan has been witnessing an incremental process of adaptation to the changing dynamics between China and the US, which has been ongoing for decades. Gaens also questioned Abe’s ability to bring forth the change in Japan’s constitution regarding its current pacifist bias, in view of the overall negative public opinion towards constitutional revision. Finally, Gaens took up the significance of Japan’s partnerships with other powers than the US, such as the EU and India. 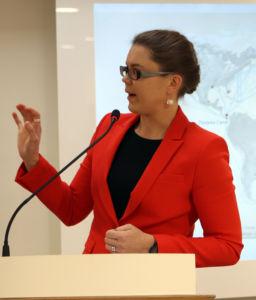