President Nasheed is the founder of the Maldivian Democratic Party and was its presidential candidate
in the 2008 presidential election. He has become most known for making public the threat posed to
the low-lying islands by changes in the sea level. In March 2009, President Nasheed pledged to set
an example by making the Maldives carbon-neutral within a decade by moving only to wind and solar
power. As part of a wider campaign publicizing the threats of climate change and its effects on the
Maldives, Nasheed presided over the world’s first underwater cabinet meeting on Oct. 17, 2009.

Oras Tynkkynen is a Member of Parliament since 2004, representing the Green League. He
serves as Prime Minister Vanhanen’s Advisor on Climate Policy. Tynkkynen is also a Member of
the City Council of Tampere and an environmental activist.

Dr. Teija Tiilikainen, Director of the Finnish Institute of International Affairs, welcomed the President, Excellencies, and ladies and gentlemen to the seminar. Dr Tiilikainen introduced the topic of the seminar, talking briefly about the fault lines over which a new potential global climate regime is being negotiated before introducing the speakers.

His Excellency President Mohamed Nasheed of the Maldives opened by stating to have enjoyed the Finnish climate during his stay, which he had oft been told is the coldest winter for decades. He moved to remind us that the environment we experience around us is not merely ‘the weather’, but manifestations of climate change and climate aberrations.

Discussing the science of climate change, during the months after Copenhagen there have been a number of stories clouding people’s perceptions of climate change. However, the President stressed that these stories make no difference whatsoever in terms of impact or science and that these stories could amount to a conspiracy. The audience was asked: why was there no investigation into the criminal act of hacking the e-mail of the University of East Anglia? Why is this story getting such attention? Now is the time to see an investigation into which individuals and networks were involved in hacking these emails. We have to understand also who is trying to cloud the issue.

Drawing on his recent visit to Iceland, the President cited the island nation’s efforts in increasing its use of renewable energy. Reminding us that railways were initially considered the work of the devil by some, windmills are similarly seen to scar the landscape. These don’t necessarily scar; if we are born with these around us, they are established and taken as normal rather than railed against – it is moves such as these that are the only way to save the planet. Moving on, the President stated that we are at a threshold; the Maldives are just 1.5 metres above sea level and on the front line of climate change and rising sea levels. People have already been relocated; water is being contaminated by sea water and fish stocks are dwindling. Climate change is very real and what happens in the Maldives now is an indicator of what is to come.

Making a comparison to the tobacco industry’s decades-long fight against legal recognition of the harmful effects of smoking, the President stressed that we can’t wait that long on climate change. Climate negotiations are not like arms or trade talks; you cannot negotiate with Mother Nature. Alternative sources of energy must be uncovered and harnessed; economically, whoever finds the way forward will be the ‘winners’ of this century. The Maldives can’t make emissions cuts that will impact the world, but it can act in a way that shows the way forward. The message is: leadership is going out and making your people believe that this is the way forward, not following the herd. As a paragon, Kennedy stated he wanted Americans to land on the Moon, yet he didn’t know how they would do that, but they succeeded within a decade. Leaders need to have a vision and need to come forward.

Professor Janne Hukkinen opened by drawing on W. Bennett’s notion that the human relationship with the environment is a predicament; the utilisation of the environment brings freedoms, but at the same time systemically increases dependency. From the cognitive perspective, how do we learn to cope with this dilemma?

Next, ideas of anthropologist Bateson were introduced: the double-bind and double-learning. The professor gave the example of a dolphin and a trainer in order to illustrate his wider views on humanity facing climate change: a dolphin receives a reward for a trick, but after a while that trick would yield no reward until a new trick was performed, and so on. In the face of this conflicting information and ensuing frustration, the dolphin learns to innovate new, original tricks in order to secure a reward and has, in a sense, learned to learn. For humans the challenge is not to attempt the same old trick of looking for another, established non-renewable source, but the trick is to find new alternatives to human expansion.

In defending the IPCC, Professor Hukkinen claims it has done a good job, yet its strength is its greatest weakness. Whilst striving to understand the climate represents progress, the uncertainty fuels questions and controversy. There needs to be a link between uncertainties and the way forward, with immediate rewards and punishments for actions taken. Furthermore, this winter in Finland, the trains have not been running efficiently. The link has to be made clear that this is a manifestation of climate change, not a failure of services. Finishing on leadership, Prof. Hukkinen drew on Churchill; on eve of war, he was focussed on the uncertainties and threats, but also promised victory.

First off, Mr Oras Tynkkynen asked: can small countries provide leadership? Towards answering his own question, examples of global leadership by Finland – in his words a small, remote arctic country – were given. Former president Ahtisaari, who won the Nobel peace prize in 2009, showed leadership in conflict resolution, whilst telecommunications giant Nokia went from modest producer of rubber tyres and boots in the early 1990s to become the market leader in mobile phone handsets. As for climate change, smaller states can lead diplomatically – hosting conferences, negotiations, bringing together north and south; politically – setting targets, ambitious visions and practical implementation can be inspiring – as well as technologically and commercially. An actor does not have to be a superpower.

On Finland’s climate leadership, Mr Tynkkynen asked if it was lagging behind, average, or a frontrunner. The answer depends upon what one looks: being a forerunner in combined heat and power, average with regards to its reduction targets under the Kyoto Protocol, and lagging behind in its use of wind power. At Copenhagen activists had banners claiming ‘politicians talk, leaders act’. Mr Tynkkynen says this is not 100%; talk can inspire others and was something which President Nasheed did earlier in the seminar.

In the Q & A Session the first question came from a former IPCC report author, who thanked the President for his comments on the email scandal. He asked why there is no combination of climate abatement with other environment goals, such as preserving the rainforests. In his response, President Nasheed aptly stated that climate change is not just an environmental issue, but also a security, economic, and human rights issue.

The second question asked whether it was realistic to strive to achieve an over-arching global regime after KP, or would a bottom-up version of individual pledges be more likely? Professor Hukkinen was pessimistic as to the chances of an over-arching agreement – believing that, unfortunately we will need to see smaller or bigger catastrophes before the necessary action is triggered. Oras Tynkkynen claimed a bottom-up approach won’t be enough; collective action and thus regime is needed.

Next, on the EU emissions cut pledge, Finland this week went against the proposal to raise the target to a 30% reduction. The panel was asked about their thoughts on this. President Nasheed said that the government would follow the will of the people, and so it is the duty of the people to get out in the streets, rather than tweeting or using social media websites.

The panel were then posed questions on negotiations and providing assistance to developing states. President Nasheed opened the responses stating that it was time to stop pointing fingers. Citing nuclear disarmament, he said that this was no longer an issue, not because of negotiations but due to other factors affecting the USSR; fighting, economics, obsoleteness of the command economy. The economics of climate change will make the difference. As for assistance, in the case of the Maldives, the President said that actions have to be taken alone, to fend for themselves as red tape is too much of a barrier to action funded by global and regional financial institutions.

The final question centred on obstructionism in climate negotiations, and it was aptly noted that this was the flip-side of coin of ‘leadership’. The panel was asked whether implicit obstructionists – the US and China – are preventing progress, and what to do with the explicit ones, e.g. the Gulf States, i.e. should they be engaged or isolated?

President Nasheed again pointed out that economics would be the key to movement from the US and China, and that climate economics has to be brought into mainstream economics. On the Gulf States, the President hinted at signs of change and recommended that some South American states have to accept the Cold War is over. 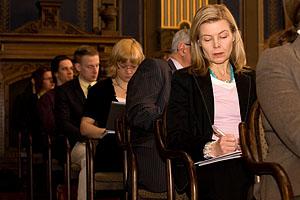 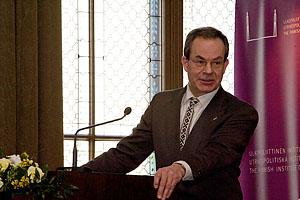 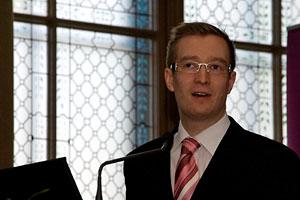 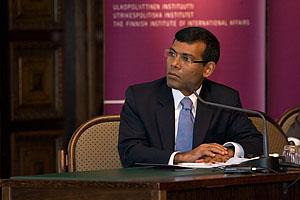 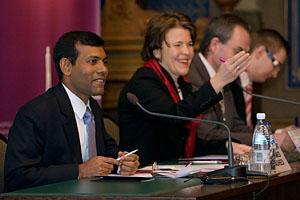 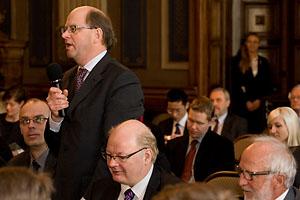 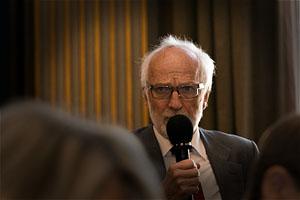 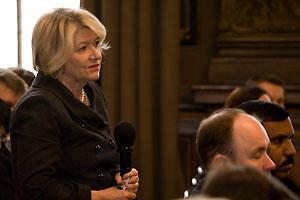 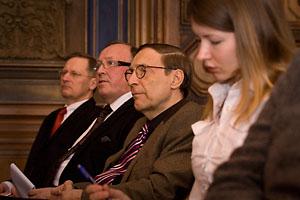 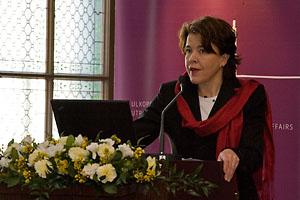