This FIIA report is a multidisciplinary endeavour to understand the present dynamics and shed light on the future challenges of water security in the Levantine part of the Middle East. Its central message is that the region is in dire need of sound water management policies and practices that are based on multi-stakeholder engagement and transboundary cooperation. Internal and external pressures such as growing populations, modernization, economic liberalization, Islam, and climate change will also have to be taken into account and managed. Without a proactive approach that breaks with the current wasteful consumption patterns, Lebanon, Syria, Jordan, Turkey, the Occupied Palestinian Territories and Israel will not achieve water sustainability, with potentially disastrous ramifications in the near future.

Dr Anna Korppoo, Programme Director of the research programme on the International Politics of Natural Resources and the Environment at the Finnish Institute of International Affairs, welcomed the speakers and audience to the report launch seminar. She noted that, with the climate negotiations proceeding slowly, it is even more important to focus on the impacts climatic changes can have, in this case on water resources in the Middle East.

Dr Mohamed Abdel Raouf from the Gulf Research Center in Dubai gave the keynote speech in which he stressed the importance of the Middle East to the world, and the importance of water to the region, being an area with relatively few rivers and forests.

Historically, the lifestyle – with regards to transportation, trade and human inhabitation – was sustainable, with societies living in harmony with nature. As a result of industrialisation, problems have arisen, especially concerning water: almost all of the Middle East is below the water scarcity level of 1,000m3 of water per person per year. This has led to desertification in almost all of the countries in the region.

Most water in the region is in underground aquifers but yearly rainfall has dropped significantly, which can most likely be attributed to climate change. In some of the countries up to 90% of water is used for agricultural purposes, due in some degree to food security policies. Also inefficient water use is a problem. To remedy this, desalination has been presented as an option, but a money and energy intensive one. Strategies of ‘greening deserts’ would be unwise on the other hand for reasons of adaptation. Climate change will also pose a threat in the form of rising sea levels.

To deal with these problems, a mix of different policy measures is needed, including various penalties and fines, economic instruments, and awareness and educational programs. The main challenges include the non-renewability of water resources and over-exploitation. However, there are opportunities in for example research, desalination, grey water re-use and recycling. The speaker went on to say that for social and political reasons, water has to be free, even though costs do need to be retrieved.

Mari Luomi, researcher at the Finnish Institute of International Affairs, presented the FIIA report that was launched in the seminar. The project from which the report was born started already a year ago, and included also a training course for Finnish professionals organised together with the Finnish Institute in Damascus. The choice of topic was prompted by a number of water-related crises, including problems with high agricultural water use, droughts, poverty, internal migration and trans-boundary river disputes. The debate on climate change and security has finally ‘entered’ the Middle East.

A bottom-up approach was taken when deciding on the structure of the report, mainly due to the multidisciplinary backgrounds of the participants. The report concludes that water security in the Levant is weakened by a number of factors and the situation looks increasingly dire, particularly when taking into account the current projections on the impact of climate change. Among the main problem factors are bad management and governance, as well as a lack of stakeholder engagement and transboundary cooperation. Water problems in the region are complex and there is no simple solution, but positive practices are emerging in different countries and at different levels. Sustainable water security in the Levant could be enhanced by learning from these examples and through cooperation with the international community, including Finland with its recognised expertise in water management.

In the panel discussion with the authors the discussion continued in more detail. Dr Korppoo introduced the panel members, who then proceeded to give a brief overview of their respective chapters in the report.

To open the discussion Piia Moilanen asked Dr Raouf what role he thought private funding could play in the Middle East. Dr Raouf believed that in the future this will be provided by the private sector, but quality will be an issue. Funding and monitoring will also be a problem to be first solved. Dr Olli Varis stated that ‘fracturisation’ – i.e. departments not talking to each other – was a concern for the countries covered by the report. To highlight the seriousness of water issues, the Egypt department for water resources and irrigation for example was presented as having over 70,000 employees, which is around 100 times more than that of Germany’s respective department, a country of similar size. Kirsi Krogerus added that local administrations are not well developed to address the issues, while Ulla-Maija Mroueh discussed the potential of desalination as a solution. On the positive side, management and technical skills are abundant in the Middle East, but there are significant social and political hurdles to overcome. Presently, all countries concerned are trying to develop strategies and legislation.

Ms Luomi raised the issue of Islam and water, the topic of one of the chapters in the report, stating that this is politically difficult to approach. Islam, however should not be forgotten because it is an important social force in Muslim countries. She gave an example from a leaflet written to encourage people to protect the environment: although the leaflet was published by a secular body, it still included a reverent quotation from the Prophet Mohamed: ‘don’t waste water even if you are in a running river’.

In closing, the panel was of the opinion that among the most important approaches to solving the region’s water security dilemma would be to focus on integrated water management, and to seek to obtain international funding for adaptation, for example from the UN Framework for Climate Change and related institutions.

The audience asked questions on a variety of topics such as Mediterranean cooperation, the possibility of developing a water utility based on energy utility, as well as giving comments on Egypt’s long history of water management. It was noted in the keynote speech that water can be used as a political weapon, and hence a question on how Israel is acting in this regard was raised. Dr Raouf replied by stating that Israel does not have much water and is controlling South Lebanon to a large extent for water reasons. Water is very important for survival, but such a one dimensional view can hurt cooperation and be a source for conflict. Israel and desalination was also mentioned, and the effect on water policy it could have.

Ms Luomi then wrapped up the seminar by presenting the two schools of thought on the topic: water as a source of crises in the region and water issues as a basis for peace-building. Ms Luomi stated her belief that the reality lay somewhere in the middle. Political issues need to be taken into account when seeking to solve both internal and external water disputes, and cooperation is most definitely needed when it comes to the intensifying effects of climate change. 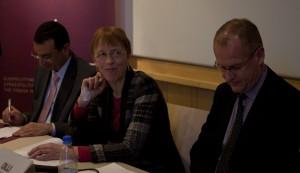 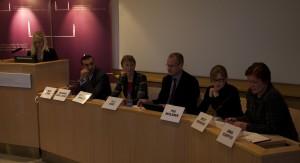 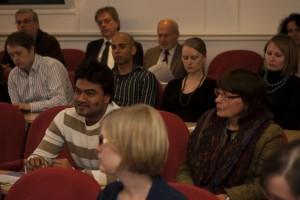 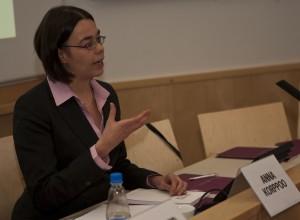 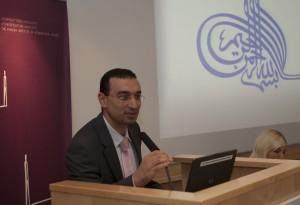