Military operations today have more to do with information and cognition of people than ever before.
The battle for the hearts and minds of people has, in recent years increased in significance on the
western war agenda. In post 9/11 wars, fought by the West and the international community, rigorous
image formation is central. The age of post-modern war can be seen as an era of intensifying strategic
communication, marketing or branding of military operations and public diplomacy policies. Carefully
created and easily adoptable “war-brands”, which can be fitted into the expectations, mindsets, values
and visions of the public, are vital in topical wars. This seminar looks into the topical military information operations and strategic communication, especially in relation to the Afghan war and the ISAF operation.

The seminar marks the launch of a FIIA Working Paper by Noora Kotilainen: Humanitarian Soldiers,
Colonialised Others and Invisible Enemies – Visual strategic communication narratives of the Afghan War.

Professor Aki-Mauri Huhtinen, National Defence University, Finland
Professor Huhtinen works at the Department of Leadership and Military Pedagogy at the National
Defence University. In addition he is Docent of Social and Moral Philosophy at the University of Helsinki. Professor Huhtinen specialises in information warfare, strategic leadership, phenomenology, gender issues and new forms of topical warfare. He will speak about “Strategic Communications and Information Operations”.

Noora Kotilainen, visiting scholar, PhD Candidate, Finnish Institute of International Affairs
Ms. Kotilainen is a visiting scholar in the Global Security research programme at the Finnish Institute
of International Affairs. She is writing her PhD dissertation at the University of Helsinki social science
history department. In her PhD work she concentrates on the visual culture and presentation of wars
and crises, in relation to the topical changes in warfare and the evolution of humanitarian world politics.

Summary of the event:

Professor Aki-Mauri Huhtinen from the National Defence University spoke about the similarities in civilian and military management and their current challenges. As military management has typically been a  type of one-way communication, it has  had to be reformed since new forms of information sharing and new media have appeared. The social media has blurred the border between public and private information. A new problem for the military has emerged: that of losing the narrative, which means the risk of losing control over the organisation’s reputation.

Reputation is formed in many ways, but it is increasingly affected by visual material, such as photos and videos. In battle fields today, combat cameras have become important. However, also unofficial information is leaking from the battle fields to the public. The minds of  audiences are affected in several ways, both through official and unofficial (and many times undesired) information flows.

The aim of psychological operations is to affect the opponent and its supporters. This has been going on since the beginning of warfare, but recently the concept of war propaganda has gone through a renaissance. Psychological factors have become increasingly important, and information operations can play a central part in winning or losing a war. Thus, it is central for the military to concentrate their message, in order to prevent the leakage of controversial information to the public. This aim is identical to that of civilian business brands: if the brand is hurt, it takes a long time to repair it. The increased importance of cyber space as a battle ground has reduced the significance of having large armies. Today it can take only one person with good computer skills to make a major difference in warfare.

Noora Kotilainen presented a specific case where the military is trying to control information flows. In her presentation, she introduced the findings of her newly published working paper. The source material for her study is the imagery of the ISAF official photostream. In her study, Ms. Kotilainen has classified these approximately 20 000 pictures in different classes and analysed how the ISAF has wanted to present its operation for the (mostly Western) public. The findings of the study show that the ISAF pictures are polished pictures. They mainly want to present cooperation between the troops and the locals, Afghans happy to accept the help of the troops, emancipated women and happy children. What is missing from the pictures were photos of the enemy, pictures of battles, or wounded soldiers which unquestionably should be present if one was to give a balanced picture on the war.

Ms. Kotilainen’s analysis of the images included a deeper look into what the pictures tell about current world politics and global values. What do they reveal about their presenters and their audience? One key theme on the pictures was the underlining of humanitarianism and the new role of the humanitarian soldier. There has been a shift in warfare, and many wars today get their justification from humanitarian goals. Thus their goals seem to be undisputably good. Another major pattern was the portrayal  of the Afghans as uncivilised and backward. Ms. Kotilainen argued that it is possible to see the shadow of colonialism in the pictures.

The fact that the enemy remains unseen in the photos is a way of depersonalising the enemy, and making them inhumane. This makes the war easier to accept: it seems that the soldiers are not fighting against people, but just enemies. 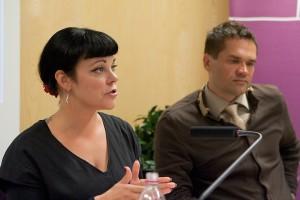 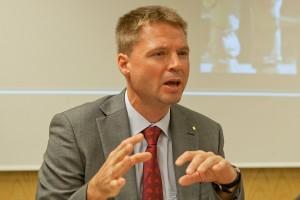 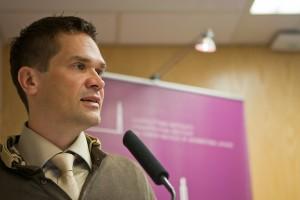