The Nuclear Non-Proliferation Treaty (NPT) regime, guarding the access and ownership of nuclear weapons, is up for review at the United Nations in May 2010. This seminar looked at the changes necessary in the regime in order for nuclear proliferation to be prevented, as well as relevant regional issues and challenges related to nuclear disarmament.

This event also marked the lauch of the FIIA report:
Nuclear-Free Security – Refocusing Nuclear Disarmament and the Review of the Nuclear Non-Proliferation Treaty
by Dr. Tarja Cronberg

North Korean Nuclear Issues in the Context of the NPT
H.E. Mr. Ho-Jin Lee, Ambassador, Embassy of the Republic of Korea

U.S. View of what the NPT can Achieve
H.E. Mr. Bruce Oreck, Ambassador, Embassy of the United States of America

The Middle East as a Nuclear Free Zone
H.E. Mr. Maasoum Marzouk, Ambassador, Embassy of the Arab Republic of Egypt

The Nuclear World is Changing, whether We Want It to or Not
Mr. Tero Varjoranta, Director, Radiation and Nuclear Safety Authority Finland, STUK

Dr Tarja Cronberg, senior adviser at the Finnish Institute of International Affairs, opened her presentation by highlighting some of the issues that will be under discussion when the next review of the Nuclear Non-Proliferation Treaty (NPT) will come up in the United Nation in early May 2010. Dr Cronberg noted that the review, scheduled to take place every five years, had had an uneven recent history: in the year 2000 the review approved 13 practical steps for action, but by the time the 2005 review came up, little progress with those steps had been made. The upcoming 2010 review on the other hand promises to be different in that the expectations of the participants are high and a willingness to move forward is gaining ground, further boosted by presidents Obama’s recent actions and declarations.

Dr Cronberg outlined the wide-ranging findings in the FIIA report, launched on the same day. She pointed out that one of the major changes in the way nations understand the role of nuclear weapons in their security strategy, has happened in the way international “threats” are viewed: it is no longer so much a question of having safeguards against “military” threats, but nuclear weapons are rather seen as “insurance” against a possible future threat. The images of a “highly uncertain future” and “unknown threats” play a large part here. Additionally, nuclear weapons have a non-military function in protecting a nation’s status of power and prestige, in particular in the case of France and Russia. Finally, nuclear weapons do still work to symbolize the technological capabilities of a country, and are even a symbol of national pride as is the case with China.

On the issue of how to move towards greater nuclear disarmament, Dr Cronberg said that many nations with nuclear capabilities agree that there is a need to re-think the security environment, to break the linkage between nuclear weapons and power status, and to have better guarantees or limitations on technological issues, for example. However, the Obama administration is not willing to accept limitations to its missile defenses, a point that China and Russia, for example, see as a precondition for nuclear disarmament on their part.

Dr Cronberg also discussed the role of the NPT and the International Atomic Energy Agency (IAEA). She noted that both the NPT regime and the IAEA have a rather weak mandate, and the NPT is further undermined by a group of member states that are non-compliant but still members, some states that have recently left the treaty and others that are let to operate under a double standard. All these factors undermine the effectiveness of the NPT. Additionally, the three different parts of the Treaty are currently not balanced.

Dr Cronberg also finds that as nuclear-free zones get a lot of international support, this might be the way forward in the process at large. This would be particularly needed in the Middle East. Finally, the issue of Nuclear weapons and the EU was brought up, and for Dr Cronberg it is particularly noteworthy how silent the EU has been with regard to reducing its nuclear weapons, other than what has been discussed at NATO level. It might indeed be too early for a nuclear-free zone in Europe.

H.E. Mr Ho-Jin Lee, the Ambassador of the Republic of Korea in Finland, gave a very detailed account of the role of North Korea within the context of the NPT Regime. The Ambassador pointed out that North Korea joined the NPT already in 1985 as a non-nuclear state, and has since challenged the effectiveness of the NPT in several ways, in particular at the time of the its withdrawal from the Treaty in 2003.

Ambassador Lee noted in his remarks that it was in fact the first North Korean nuclear crisis in 1993-97 that was the real wake-up call to the international community. In that instance North Korea still remained within the NPT regime, but the integrity of the regime was, he noted, severely undermined. In 2002 the agreed framework with North Korea collapsed when it admitted to having a uranium enrichment program, leading to the complete withdrawal of North Korea from the Treaty.

In conclusion, Ambassador Lee saw that regional and multinational mechanisms are essential when negotiating with North Korea, and in particular China has a central role to play here. China bears, in his view, a lot of responsibility in preventing a domino-effect of proliferation from happening, and precisely as a stakeholder and not as a “free-rider”. While the Iran-question might have placed North Korea and the six-party talks on the back burner at present, the diplomatic efforts are nevertheless ongoing in the background; five out of six nations still agree that sanctions must remain in place until substantive progress is made with the non-proliferation talks. While North Korea is attempting to stall the progress of the talks, the sanctions are effective and North Korea does not seem to have time on its side here, the Ambassador stated.

H.E. Mr Bruce Oreck, Ambassador of the United States of America in Finland, gave an overarching U.S. view on what the NPT can potentially achieve. Ambassador Oreck began by stressing that the U.S. has been very much involved, if not in a leading role, in the nuclear non-proliferation efforts since 1953, and is still very committed in the process, as expressed by President Obama on several occasions. Though the threat of actual nuclear war has passed, the NPT is still important for the United States. However, the NPT should, the Ambassador stressed, reflect the changes in global sources of “threat”, and more pronouncedly adapt and prepare for a future security climate, with particular emphasis on terrorism.

The United States is now in the process of reviewing its own nuclear strategy, and one of the goals here is to take steps into strengthening the NPT regime. The U.S., as its largest contributor, also sees the IAEA as having a critical role. Ambassador Oreck continued by saying that in this new age, the main problem is no longer states having nuclear weapons capabilities, but non-state actors like terrorist groupings getting a hold of them. Ultimately, the non-proliferation issues and the upcoming NPT review should not be approached with a “business as usual” attitude, as then the results will be such also. The member states should be especially careful with not repeating the same mistakes vis-à-vis Iran as were made in the early stages of the North Korean problem.

Finally, Ambassador Oreck pointed out that recently there has been an explosion of interest in the medical and industrial uses of nuclear technology. China alone has 40-60 plants under consideration, and close to 60 nations have approached the IAEA with regard to nuclear energy. This development, the Ambassador concluded, could lead to a more realistic threat than that potentially posed by nuclear warheads, in particular when it comes to terrorist organizations getting a hold of nuclear material. The increased interest in nuclear energy then is also a problem for the non-proliferation efforts, and ensuring the security of all nuclear material has to be a part of any future international plans.

H.E. Mr Maasoum Marzouk, the Ambassador of the Arab Republic of Egypt in Finland, gave his remarks on the topic of establishing a nuclear-free zone in the Middle East. In the 2010 review of the NPT this point will very much be on the table, and Egypt will be one of the main drivers behind it. The proposition has been on the NPT agenda since 1995, but the discussions internationally and regionally have gone on much longer than that. Ambassador Marzouk emphasized in particular that establishing such a zone could have a wider effect in fostering regional co-operation, helping to build confidence; also, as a block the nations could then press on for wider progress. Not establishing the zone could lead to an arms race. However, the Ambassador pointed out, there are several difficulties and shortcomings in realizing the zone. From the point of view of Egypt, the fact that the security strategy of Israel for example is currently dependent on nuclear arms is highly problematic, and in his view this reveals a double standard at play.

Ambassador Marzouk indeed defined the upcoming NPT review conference as a “moment of truth” for the Middle East and for many non-aligned countries, in terms of pushing forward in the process; the Ambassador even went so far as to say that the faith in non-proliferation was at stake here. For these reasons, new interpretations on the NPT or new obligations on member states should not be put forward at this moment, but rather work to achieve the goals set so far.

Mr Tero Varjoranta, Director at the Radiation and Nuclear Safety Authority in Finland (STUK), gave a very timely presentation on the civilian uses of nuclear technology and the security issues involved. Mr Varjoranta stressed that the potential risks lie mainly in forgetting the whole life-cycle of nuclear plants which can span half a decade; the “renaissance” of nuclear energy going on at the moment revolves almost solely around the building of reactors. According to Mr Varjoranta, the whole verification culture has to change. While the IAEA is the main body in this, there is an obvious problem of resources, and hence the future role of IAEA might be different. Crucially, the countries opting for nuclear energy should not be left on their own devices, and there is a lot of work to be done with the vendors also. In the end, Mr Varjoranta stated, the nuclear world is changing and with it must change the non-proliferation and safeguarding systems also – at heart, proliferation is a political problem with no technical solution.

In the Q&A session the possibility of dividing the IAEA into “military” and “civilian” sections was discussed. Dr Cronberg pointed out that civilian use will be the main source of proliferation in the future, when taken the whole life-cycle of nuclear material in to consideration. The knowledge, Dr Cronberg continued, for both of the functions is the same and strongly present in the IAEA, but of course there is a problem of ambiguity at the moment, and separating the two functions into two different regimes in the IAEA might make for a more dynamic organization.

Also the question of terrorism and nuclear material came up. Ambassador Oreck said that when it comes to the threat of for example dirty bombs in the hands of terrorists, there is not such a need even for extensive evidence that attacks are being planned, rather the issue should be approached from the point of view that it is too risky not to take into consideration such a development. The safeguarding mechanisms for nuclear material should be in place before control on the matter is completely lost. 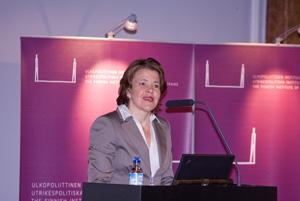 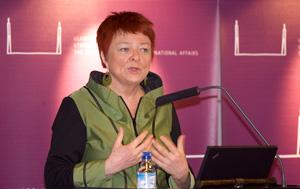 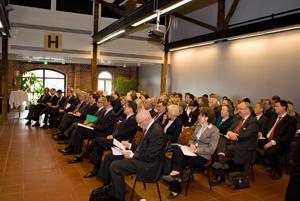 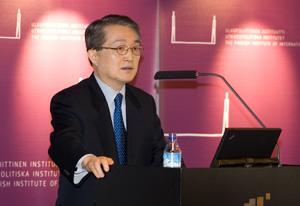 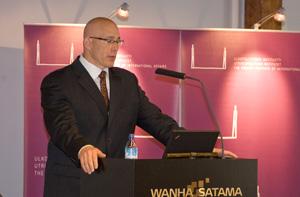 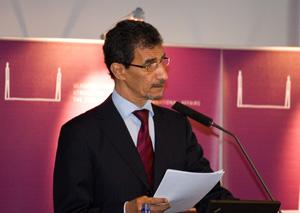 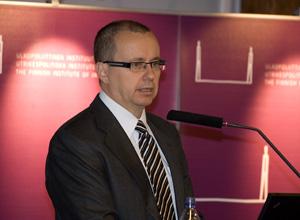 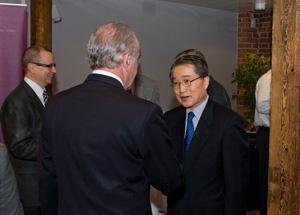 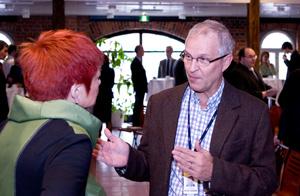 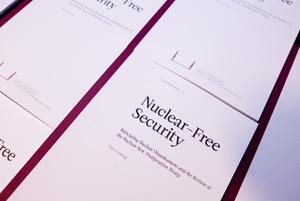 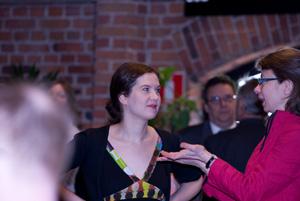 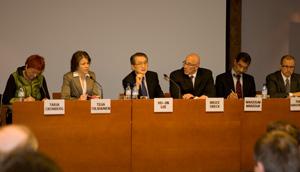