Mark Fitzpatrick directs the IISS Non-Proliferation Programme. He previously served for 26 years in the US State Department, specializing e.g. in non-proliferation issues. In his last posting, he served as Deputy Assistant Secretary for Non-proliferation, responsible for policies to address the proliferation problems posed by Iran, North Korea, Libya, Iraq, South Asia and other regions of concern. He is the editor of IISS strategic dossiers on Nuclear Black Markets: Pakistan, A.Q. Khan and the Rise of Proliferation Networks (May 2007) and Nuclear programmes in the Middle East: In the shadow of Iran (May 2008), and a frequent commentator on BBC and other news outlets.

Mark Fitzpatrick from the International Institute for Strategic Studies presented a wide-ranging review on the current state of nuclear proliferation and associated developments in the West Asia and North Africa regions. He reminded the audience that nuclear technologies still continue to spread to unstable regions and warned that a nuclear-armed Iran could, under certain conditions, lead to a regional proliferation cascade. The challenge from the Western point of view will be to channel the current aspirations into purely civilian nuclear programmes.

According to Fitzpatrick, the Pakistani nuclear programme, contrary to speculations and despite the unstable political system, is not at great risk of theft or diversion. This is because of the robustness and coherence of the Pakistani army. Pakistan, however, according to him, continues to acquire nuclear programme material from the black market because of a better price and quality than would be available from domestic manufacture.

Iran, on the other hand, as Fitzpatrick affirmed, is seeking a nuclear weapons capability – or in other words, to be capable, if needed, of building a nuclear weapon within a short range of time. Fitzpatrick gave several justifications for his argument including that, first of all, Iran has in the past engaged in 18 months of clandestine work and it has committed over a dozen of safeguards violations; secondly, that enriching uranium is not economically rational for a country with less than ten reactors; thirdly that even with an indigenous enrichment capability Iran would still depend on imported uranium ore for its nuclear fuel cycle and, fourthly, that the country’s military has been involved in suspicious nuclear energy-related activities.

Among Iran’s motives for the nuclear programme, Fitzpatrick listed prestige, national pride and sovereignty, leadership in the Gulf region, regime survival and deterrence. He argued that the last function has presently less relevance than during the Iran-Iraq War in the 1980s and that Israel is only a military threat to Iran precisely because of the Iranian nuclear programme.

Fitzpatrick argued that the time for diplomacy is running out because of Iran’s progress with its nuclear programme. He said that despite the growing, young population that is increasingly reform-oriented there is not time for a change to originate from the inside the country that would have an impact on the nuclear programme. He also cautioned that Israel might need to make ‘fateful decisions’ as to whether and how it would coexist with a nuclear-capable Iran.

Fitzpatrick’s main message was that if Iran manages to develop a nuclear capability, the result can be a nuclear proliferation cascade in the Middle East and North Africa (MENA) region. During the last two years, 13 countries in the MENA region have stated their interest in nuclear energy. Fitzpatrick maintained that the motivations were both to do with energy politics and purely political factors. A nuclear Iran could prompt its neighbours to seek a weapon and this, in turn, could cause a regional proliferation cascade as more states seek to do the same. This scenario would become even more likely were Israel to change its doctrine of nuclear ambiguity.

However, whilst the threat of a proliferation cascade is real, it is not imminent and Fitzpatrick remarked that there is still time to draft policies and create practices that can serve as a bulwark against a cascade. Aspirant countries should accept full transparency and enforceable international verification, and they should concentrate only on civilian nuclear technologies.

Fitzpatrick also gave the case of Syria as an example of the difficulty of detecting and deterring proliferation at an early stage.

The policy recommendations Mr Fitzpatrick gave for preventing further proliferation all related to the strengthening of different ‘tools’ of non-proliferation. Among these are transparency, IAEA verification, enforcement of UN Security Council resolutions, regulation of enrichment and reprocessing, setting clear conditions of supply of fuel, strengthening regional arms control, and finally also deterrence and reassurance.

For further information see the recent IISS publication Nuclear Programmes in the Middle East: In the Shadow of Iran. 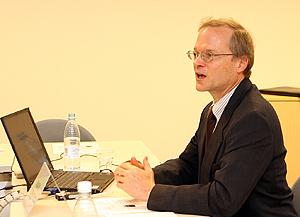 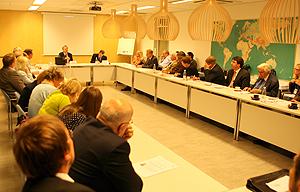