etusivu / Tapahtumat / Russian Economy and the Challenge of...
jaa
jaa

On February 15th, the Finnish Institute of International Affairs organised the third seminar in its four-seminar series on Russia. The seminar focused on Russian transport infrastructure. The main speaker of the event was Researcher Katri Pynnöniemi from FIIA. The commentary speech was given by Dr. Pekka Sutela from the Institute for Economies in Transition, Bank of Finland (BOFIT). The event was chaired by Dr. Arkady Moshes.

Dr. Arkady Moshes opened the seminar by explaining why transport has attracted the interest of the Institute. Dr. Moshes stated that transport is a major challenge for Russia’s economic growth in the future: fewer new roads are built and building them has become increasingly expensive.

Ms. Katri Pynnöniemi started her presentation by acknowledging that one of Russia’s top priorities is the improvement of transport network because there is a lack of roads and the existing ones are in poor condition. Russia is aspiring to become a modern, more competitive country and to concentrate in innovative development. However, Ms. Pynnöniemi argued that at the moment the poor infrastructure is holding back Russia’s economic growth.

Ms. Pynnöniemi illustrated the positive trends in Russia’s attempt to improve the state of infrastructure. She stated that in 2007, €24 billion was invested in infrastructure. Between the years 2002-2007, some 16 000 km of roads were built. The railway network in Russia is one of the largest in the world and it also is intensively operated. Nevertheless, systemic improvements are needed.

In her presentation, Ms. Pynnöniemi presented five aspects that require change so that the goal of functioning transport could be achieved by 2020. Distance to the markets was mentioned as first point. The second point was increasing the density of transport networks. Following this comes inevitably the quality of infrastructures and the reliability of the services. Finally, a modern regulatory and policy framework is required for implementation.

Ms. Pynnöniemi moved on to talk about the Russian approach to competition. Russia hopes to be in a position to provide a transport corridor between Europe and Asia. However, Ms. Pynnöniemi stated that the corridor development is seen as zero-sum game in Russia. Modernisation requires development, but Russia seems to fail in developing infrastructure. One reason for this is the harsh climate in Russia.

Ms. Katri Pynnöniemi listed three geopolitical aspects that contribute to the issue of modernization and infrastructure construction. First is the concentric Russia, with the fragmentation of the post-Soviet space. Second is the reorganization of Russia – the dilemma of non-existent infrastructure and finally, Russia as space in-between, attempting to integrate itself into the global markets. These processes can be seen as complimentary but also as competing with each other.

Ms. Katri Pynnöniemi’s conclusion was not very optimistic: Russia is facing an enormous task of modernizing its infrastructure. Investments have increased, but there is not yet evidence of the efficiency of this. Moreover, motorisation of the country exceeds the capacity of its roads. Even though the regulative framework has improved recently, the pace of development compelled the state to make ad-hoc solutions. Transport is closely tied with competitiveness and modernization of the country.

Dr. Pekka Sutela started by citing Dmitry Medvedev’s speech and identifying the four main goals for Russia by 2020: institutions, investment, infrastructure and innovation. Dr. Sutela then announced that BOFIT forecasts that the Russian economy will continue growing robustly. However, he noted that Russia also faces an economic dilemma as it is located between low-cost Asia and high-tech Europe, but Russia itself does not belong to either of these groups. The Russian officials are not pondering this issue, but have announced that Russia aims to become the world’s fifth biggest and Europe’s largest economy by 2020. Dr. Sutela reminded that currently the Russian economy ranks tenth in size and in order to achieve its goal the Russian GDP needs to keep growing and the ruble must gain appreciation in the market.

Dr. Sutela turned back to the question of innovation assessing whether Russian growth can be achieved by innovation. He also portrayed another possibility which is growth by imitation. Dr. Sutela stated that as Russia lags technologically behind the US and Europe, therefore growth by imitation is possible for Russia. The Russian industries are heterogeneous and have uneven proportions in the markets. Furthermore, the transport infrastructure is uneven in the country: certain regions such as Moscow, St. Petersburg and Tyumen benefit from better transport networks.

In the Q&A session there was a wide array of questions and comments for the speakers. The Director of the Institute asked about the relation of the high oil price and the Russian investment in infrastructure. Dr. Sutela answered that it is estimated that the price of oil will remain stable for the next three years, but if there were a dip in the price this would have a negative effect on the infrastructure investment.

A question was asked referring to the possible introduction of timber tax on exported timber and its effects on the transportation infrastructure. Ms. Pynnöniemi answered that it would have a great impact on the railroad boarder crossing points, but it will also pose a great challenge for Russian motorized roads.

A question was asked about the transport corridor and why does Russia promote it and also how will climate change affect the use of this corridor. Ms. Pynnöniemi elaborated on the corridor use that it is securing Russia’s integrity and also enables further invest in Siberian road network. Whether a corridor will open in the Arctic Ocean due to climate change remains to be seen

This seminar is part of the FIIA seminar and Briefing Paper series Choices Made: Russia the Rest Will Have to Deal with:

25 January 2008
Russia’s Security and Defence Policies: Should the West Be Worried?

15 February 2008
Russian Economy and the Challenge of Modernisation: Transport and Infrastructure 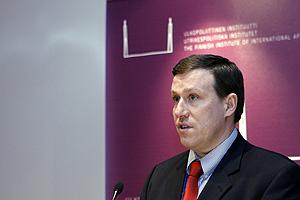 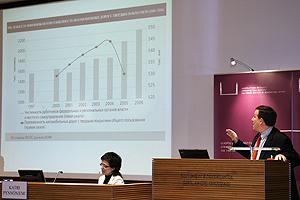 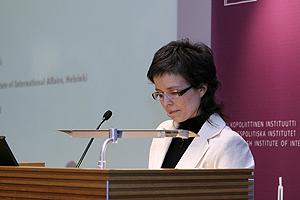 The Transport Infrastructure in RussiaFrom Modernization to Development: Fact and Fiction