The global financial crisis has an economic and a political impact on Russia. Russia’s political system is infused with business interests and economic considerations. The crisis presents external and unexpected challenges to the system and rocks the balance between elite groups. It calls into question whether the economic and social stability of the Putin years has in fact been successfully sustained during Medvedev’s presidency.

Mr Nils Torvalds is a journalist and writer who has among other things worked as a correspondent in Moscow and Washington for the Finnish Broadcasting Company Yleisradio.He has recently published a book ”Muodonmuutoksia – Venäjän pitkä vuosisata”, handling Russian history in the past century.

Summary of the seminar: “Russia’s Politics Amidst the Global Economic Crisis”

Dr Arkady Moshes opened the seminar by welcoming everyone to the launching of Dr Vadim Kononenko’s Briefing Paper, titled “Russia’s Politics Amidst the Global Economic Crisis – An Empty Scoreboard?”

Dr Kononenko started off by reminding the audience of the “black box” that is Russian politics. We never really know what is happening inside the box or in this case, whether the leadership really has a strategy for dealing with the economic crisis or not. Dr Kononenko stressed that the crisis has direct economic and political implications for Russia. In his mind, the crisis has especially hit the elite sector of Russia’s highly fragmented society. However, it may also have an effect on the population at large, mainly because of the high level of unemployment. The crisis also raises the question of whether the government is capable of fulfilling the objectives of Russia’s development. In fact, Dr Kononenko implied that the crisis might even serve as a catalyst for a new round of inter-elite struggle, if the government goes ahead with the plan to expand state control over selected companies and banks.

Dr Kononenko stated that Russia’s leadership initially underestimated the significance of the global economic crisis for Russia. However, PM Putin later remarked that the state would take a major role in this crisis. Dr Kononenko also discussed the matter of “re-nationalization”, which reflects the controversy surrounding the actual success of Russia’s key business players. He continued by stating that the “nationalization” and “redistribution” scenarios are in fact two sides of the same coin. On the one hand “re-nationalization” might fail because of corruption and the fusion of the state and private interests. Then again, the redistribution of wealth may lead to intense struggle and aggression between the elites. Dr Kononenko stated that Russia’s reforms of modernization will be put on hold. In the meantime, Kremlin has opted for institutional and constitutional reform to strengthen the regime in the face of economic crisis. Dr Kononenko also stressed that the crisis presents a difficult dilemma for Putin personally. Putin is expected to return to Kremlin, but he can do this only as a successful Prime Minister who has solved the economic crisis. Dr Kononenko concluded his presentation by estimating that the crisis would not lead to a regime change. He also stated that the outcome of the crisis depends on how the system will react to it, and whether the regime will find the balance.

Mr Nils Torvalds opened his commentary by stating that he will look the economic crisis in the broader context. He stated that we should not forget that the crisis will hit USA and Europe harder than it hits Russia. Everyone’s political system is going to be tested now because of the crisis. Mr Torvalds stressed that the development in the energy market is going to hit Russia hard. He also brought out the matter of Kyrgyzstan, and raised the question of who would intervene if and when the state ends up in chaos. When speaking about Russia’s political system Mr Torvalds stated that at the moment there is no feasible political organisation that would challenge the Kremlin political system. He also doubted that there would be any great political implications to the system.

In the Q&A session the effects of the Crisis on the military reforms in Russian were questioned. Dr Kononenko answered that the crisis will affect as a serious decrease of the money invested to the military. Dr Moshes added, that not merely the lack of money, but also the built-in complications of the ordeal, made the military reform impossible to implement. There was also a question on whether the power hungry elite in Russia are able to challenge Putin. Dr Kononenko answered that there is hardly anyone who would like to challenge Putin. Perhaps someone from the regional elites, but it is highly unlikely that they would be able to start a movement. Mr Torvalds commented that the poor people are more of a threat during the crisis than the rich, but they are badly organized and not able to topple a government. To the question about the implications of the economic crisis to the foreign policy, Dr Kononenko answered that there might be a possibility that Russia could change their policy of cooperation with the EU. Russia has been seen to change its policy very fast. Dr Moshes stated that Russia’s foreign policy will not be aggressive but difficult, and the economic crisis will not have major implications on that. There was also a question posed on the implication of the economic crisis on the Russian and European interdependence relating to energy. Dr Moshes stressed that they are most definitely interdependent, and it is false to think that only Europe is dependent on Russian energy. Russia is highly, if not more dependent on the European markets. 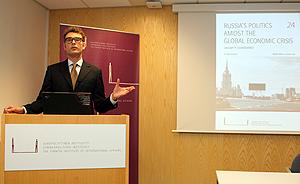 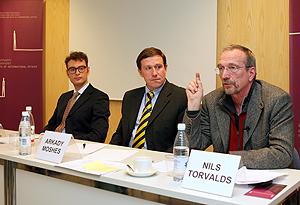