Launch of the FIIA Briefing Paper
‘Russia and post-2012 climate regime: Rather foreign than environmental policy’
by Dr Anna Korppoo

Russian climate policy has been based on economic and political benefits under the Kyoto Protocol while no serious domestic greenhouse gas emission reductions have been required until 2012. The international climate regime following up the Kyoto Protocol will require a wider participation and deeper emission reduction commitments. As a result, Russia is likely to be expected to commit to emission cuts under the international negotiations. As the Russian economy as well as greenhouse gas emissions have been growing fast in the 2000s, such a commitment would be politically difficult to accept for Russia. Also the global economic downturn may influence the Russian potential to make such commitments.

Dr. Safonov is an economist, working on various issues of environmental and natural resource economics, climate change policy, and Kyoto Protocol mechanisms for more than 12 years. Dr. Safonov was a member of Working groups on ratification and implementation of Kyoto Protocol under the Ecological Committee of the State Duma, Russian Chamber of Commerce, the Administration of President, as well as the Ministry of Industry and Energy of Russia. Dr. Safonov is an active participant of the UNFCCC Conferences of the Parties and Meetings of the Parties to Kyoto Protocol since 1999.

Simon-Erik Ollus joined the East Office of Finnish Industries in May 2008. Prior to that, he has worked e.g. at the Bank of Finland’s Institute for Economies in Transition (BOFIT). Ollus has published several reports and books about the Russian economy and Finnish-Russian economic relations. He holds a degree in economics from the University of Helsinki and is an EVA fellow.

Dr. Anna Korppoo started her presentation by reminding the audience that Russia was an active player in the pre-Kyoto negotiations. This was largely due to the economic advantages it received in the form surplus allowances (or ‘hot air’) under the Kyoto climate deal. However, disappointment over the US rejection of the Kyoto Protocol, and the lower than expected benefits of the Kyoto flexibility mechanisms, have since substantially weakened interest towards climate change in Russia. Korppoo argued that Russia is today reluctant to commit to GHG emission reductions because it fears that cutting emissions will slow down economic growth.

Dr. Korppoo also emphasized that although the International Panel on Climate Change (IPCC) findings are largely respected, not all Russians believe that climate change impacts in Russia will be all bad. Even Russian experts remain undecided on the effects of climate change. Consequently, there is no ‘climate hype’ in Russia and the issue is seldom portrayed in the media.

In her presentation, Dr. Korppoo argued that Russia’s economic argument against emissions reduction could be contested. According to Korppoo, the recent rise in Russian GDP has for the most part resulted from higher oil prices, and has thus not directly led to increases in GHG emissions. Moreover, many on-going policies in Russia have the potential to lead to substantial emissions reductions.

Dr. Korppoo emphasized that given the lack of economic advantages resulting from the post-2012 climate regime, Russian involvement could be encouraged through political pressure. Korppoo argued that while Russia has no domestic incentive to cut its GHG emissions, it has a strong desire to be regarded as a ‘super power’ in word politics. To this end, involvement by other important players such as the US and China will be crucial for Russian participation. Relating to this, Korppoo argued that the G8 could be used as an effective forum to apply pressure on Russian involvement. Finally, Korppoo stressed that the negotiations should be moved to a higher political level before the UN summit in Copenhagen if agreement is to be reached by the end of 2009.

Dr. Yuri Safonov opened his commentary to Dr. Korppoo’s presentation by reiterating that in Russia carbon emissions are slowly increasing alongside economic growth. He also admitted that climate change is given low priority in Russia. Safonov argued that environmental policy-making in Russia is restricted by the lack of experience in managing carbon emissions. What is also needed, is proper forecasting and modeling tools to provide different emissions reduction scenarios and calculate the associated costs. Safonov pointed out that Russian politicians are often reluctant to pursue climate policies at the expense of economic growth. At least without concrete evidence on the benefits of doing so.

Safonov continued by saying that it is important for Russian foreign policy to be involved in international climate negotiations. However, Safonov stressed that the main problem for Russia in the post-2012 negotiations is the lack of concrete proposals on the structure and mechanisms of the new treaty. The lack of information on the commitments of key actors such as the US, China and Japan is also considered a disincentive for taking domestic action on climate change abatement in Russia.

Dr. Safonov emphasized that Russia will support work within the UN context to reach a global agreement on climate change and will not split work in various groups. It is unlikely that Russia will be an active player in the up-coming negotiations, and it will most likely wait for concrete proposals from other key players, rather than bring its own proposals to the table. Furthermore, Safonov argued that the proposed – 25 – 40 % emissions reduction is unlikely to be acceptable to Russia, suggesting that Russia would at best be willing to agree to a reduction of 10 – 15 % compared to 1990 levels. Safonov also stressed that the international community should not wait until Copenhagen to establish talks with Russia over the post-2012 climate regime if it wishes a constructive approach from Russia in the up-coming negotiations.

Simon-Erik Ollus began his commentary by stressing that rising GHG emissions in Russia are largely a result of the oil boom and the increasingly modernized, consumption-driven structure of the Russian economy. Ollus pointed out that increases in GHG emissions can also be explained by the fact that Russia is a highly energy-inefficient country. Rising oil prices have however sparked the creation of policies to increase energy-efficiency in Russia over recent years, which would have the potential to reduce GHG emissions. In fact, Ollus argued that recent decreases in the oil prices threaten to run down these ambitious energy efficiency and modernization programs.

Moving on to the topic of the post-2012 climate treaty, Ollus suggested that Russia’s position in the negotiations can be explained through game theory. In other words, the incentive to cut GHG emissions depends largely on what Russia has to gain from the post-Kyoto regime. Ollus explained that factors such as the potential for economic profits accruing from surplus allowances, and increased infrastructure costs associated with melting tundra under oil platforms and pipelines, could encourage Russian participation in global climate policy. Finally, Ollus pointed out that the post-2012 climate negotiations are ultimately a political game and Russian cooperation will depend on political pressure and the economic benefits of participation.

Comments by Dr. Yuri Safonov and Simon-Erik Ollus were followed by multiple questions from the audience. Several questions centered on how Russia should be approached and what options should be presented by key players in the up-coming climate negotiations. Dr. Safonov suggested that Russia is expecting proposals for collaboration particularly from the EU with respect to emissions trading. Domestic ETS linked to the EU-ETS would be fairly easy to implement in Russia as a result of good reporting systems and reliable data in sectors such as the electricity sector.

Additional questions were posed on whether the origins of climate change are still contested in Russia and if there been analysis on the economic benefits of environmental protection. This received the answer that the origins of climate change are no longer the center of debate in Russia, but rather the concrete actions that should be done to prevent it. Safonov also stressed that there has been no substantive analysis on economic benefits of environmental protection in Russia.

Another question posed by the audience centered on whether there have been efforts in Russia to reduce GHG emissions by encouraging investments in green technologies. To this Safonov answered that there has been no funding of clean and renewable technologies at large scale in Russia despite huge potentials. 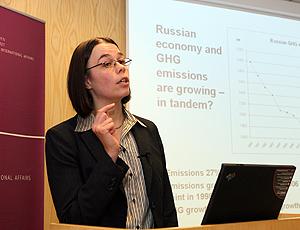 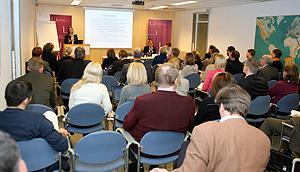 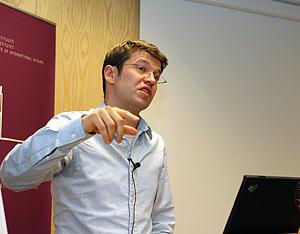 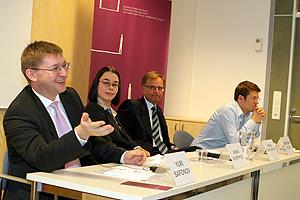