Afghanistan stands at a crossroads. Besides the reduction of Western forces, other significant security dynamics influence the future development of Afghanistan.  In the absence of the needed political solution, different external actors are proceeding with their own plans. The incoherence of the current situation is further fed by the different Afghan factions struggling for power. The dynamics of the militant insurgency in the entire region can be reinforced by the crosswinds of the regional and major powers’ aims and policies. The US and China are trying to integrate Afghanistan into their own networks of power by devising various ”new silk roads” initiatives. India and Pakistan are keenly taking part in trying to pull Afghanistan and the wider region closer to their own interests. What is the role of the regional states in the future of Afghanistan? How is Russia defending its old borders by bi- and multilateral policies? How does Kazakhstan aim to play a role in the attempt to create stability through development in the region?


Summary of the Seminar

The future development of Afghanistan will be shaped by regional and global power dynamics. Dr. Mika Aaltola opened the seminar by addressing the region’s critical moment, which will have spatial as well as temporal effects.

Dr Simbal Khan’s presentation dealt with the deep geo-political cleavages still defining the South-Central Asia region. Trans-border militant organizations generate threats to Afghanistan, Pakistan and India, but all three states have failed to develop common approaches to deal with them. Primary responses to deal with these vastly differentiated militant groups have been the use of military force and institutional capacity building. It was commonly believed that the lack of capacity of regional governments to launch effective counterterrorism and policies fueled trans-border militancy. She noted that group-identity structures organized along regional, ethnic, tribal, sub-ethnic and clan divisions should not be forgotten. She also emphasized states’ role as the main catalyst for change in border regions. Long-term policies must address the local conditions on borders and focus on steady development of conflicted and marginalized border areas.

Dr Elnara Bainazarova analyzed the changing security realm in the South-Central Asia region from Kazakhstan’s point of view. She noted that Kazakhstan is interested in the stable development of Afghanistan, and because of that Kazakhstan needs to support Afghanistan by official development assistance used as soft power. Development projects in Afghanistan have been various, including the construction of schools and hospitals as well as humanitarian assistance. Kazakhstan will benefit from Afghanistan’s development for example by increasing its possibilities to prevent illegal flows of migrants and combat extremism, and by enhancing its international image.

In his presentation, Professor Sanjay Chaturvedi addressed the need to problematize the notion of security and its referents. Afghanistan’s geopolitical location has shifted and its future will be affected by a complex relation of geopolitics and geo-economics. He argued that the Indo-Pacific littoral might become the new strategic paradigm for Asia. Geopolitics should be discussed as a written and structured notion. Embodiments of geopolitical thinking, the American and Chinese versions of the New Silk Road differ in that the former vision is vertical and the latter horizontal. Geopolitical arguments have a long history and their latest formulations for example address the American War on Terror as  neo-liberal geopolitics. Prof. Chaturvedi notes that Afghanistan’s natural resources are critical to its development, but it will depend on how they are used. Climate change also creates new threats to the security of Afghanistan because almost 80% of Afghans rely on agriculture, animal husbandry and artisanal mining.

Professor Renée Marlin-Bennett discussed the new approach of the US Government towards Afghanistan from the point of view of International Relations Theory. She found the new approach more practical and sentimental which is due to politics based primarily on feelings, not on reason. US politics is driven by fear, anger and mourning, but IR Theory takes only fear into consideration. The objects of fear have changed for example from fear of the Taliban to fear of terrorism as a whole. Mourning of the victims of 9/11 terrorist attacks has been replaced by mourning of the lost soldiers. Mourning has affected US politics by increasing the allure of the drone strikes to avoid more casualties. IR Theory would benefit from observing the sentiments of political leaders and the public. This would also bring the concept of national interest under scrutiny.

The reorganization of US military presence in Afghanistan will affect the regional security balance, remarked University researcher Helena Rytövuori-Apunen. Borders between the countries and nationalities are fluid, and no solution to border difficulties has been reached in the past thirteen years. Afghanistan faces serious challenges in various fields. Nation building has been left to the hands of donors and international community. The external powers made a mistake by giving the Taliban a reason to exist and to gain strength, and now this connection must be delinked. To find a way forward we must learn from Tajikistan’s experiences on reconciliation and power sharing. She also had several questions for the speakers, for example: How to secure power lines built in the border areas? Would power sharing be an option in Afghanistan? Does Tajikistan’s role as the only secular Persian country have any resonance to Iran? How do the events in Crimea affect Kazakhstan? Is the US exit strategy plausible?

When Dr Aaltola opened the floor to discussion, multiple questions were raised from the audience. These included questions on the possible effects on Afghanistan in case the relations between Pakistan and India would deteriorate, on a probable security vacuum and the strength of Afghanistan’s security forces, on preventing the Jihad, on common regional approaches and on the roles of Iran and China.

Dr Khan agreed that there has not been any direct conversation between Pakistan and India over Afghanistan. She noted that the Chinese are deeply present in Afghanistan, which needs China’s financial support to run basic services. Prof. Chaturvedi reminded that China’s growing presence will also have its effects on regional balance and Dr  Bainazarova believed that China might present some new approaches in the coming years. She also noted that in spite of differing statements made by heads of states, Kazakhstan and Russia work in co-operation and Kazakhstan tries to avoid politicizing the Eurasian Economic Union.

Dr Khan believes that the transition to Afghanistan’s security forces will be followed by political changes, starting from the coming presidential elections. Prof. Chaturvedi reminded that Afghanistan needs rehabilitation as well as reconciliation. The new government should bring the human domain into consideration and governance of the borders should be improved. Prof. Marlin-Bennett remarked that the problems in modernizing Afghanistan are that modernization is a mainly western concept created to make the world similar, and because of the world is structured by the Westphalian order, people, thoughts and sentiments are not able to move freely. The Jihad can be tackled only by looking for its roots and examining the activities of micro-level actors. 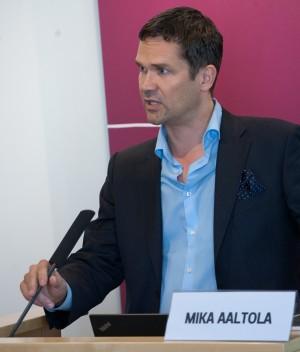 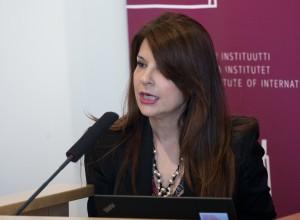 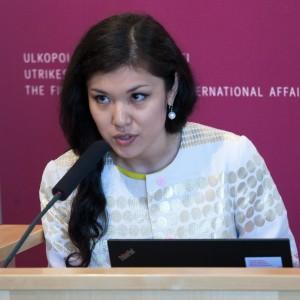 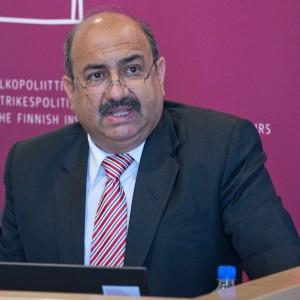 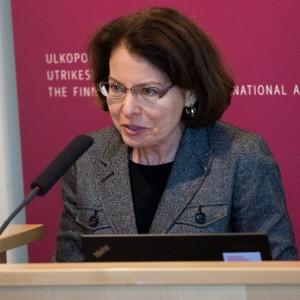 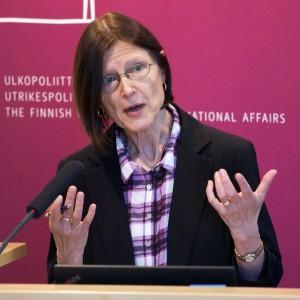