States and international organizations such as the UN and the EU have increasingly started to use sanctions in response to conflicts. Comprehensive sanctions regimes have been replaced by targeted or smart sanctions that are directed

against particular individuals or entities. By freezing assets, imposing travel bans or prohibiting export the sender is trying to force a solution to the conflict. Yet, international sanctions and their effectiveness have been widely debated. It is unclear whether sanctions produce good outcomes or if their use can have harmful effects. This seminar seeks to discuss sanctions as a general foreign policy tool and their implications upon the sender as well as the target. Are sanctions smart? Will sanctions achieve change? Are there alternatives to international sanctions? Is there a price to be paid for imposing sanctions?

Comments:
Aleksi Pursiainen is Sanctions Team Leader at the Legal Service of the Ministry for Foreign Affairs. The team advises the Ministry in forming Finnish policies on UN and EU sanctions, co-ordinates sanctions implementation in Finland and carries out sanctions outreach to the private sector. In addition to international sanctions, Mr Pursiainen has a background in international humanitarian law, including as Senior Research Fellow at Cambridge University, and in private legal practice.

Mika Aaltola, Programme Director of the Global Security Programme at the FIIA, welcomed the audience to the seminar dealing with targeted or smart sanctions, a topic which has become critical in junction with the crisis in Ukraine. He pointed out that some commentators argue that sanctions have become an alternative to war in an era where the banishment from global economy has the potential to devastate nations and economies. Smart sanctions concentrate on how groups inside of the target state are affected differently and how consequences of the sanctions change depending on the form of the sanctions regime chosen and therefore the sanctions need to be carefully calibrated.

Professor Peter Wallensteen gave an overview of the history and the different types of sanctions that exist. Their character has evolved over time from general sieges to the modern targeted sanctions. According to him, sanctions have two different functions: the expressive function, which refers to making a statement; and the instrumental function, which refers to the sanctions’ effectiveness as instruments. This dichotomy continues to characterise the debate on sanctions. According to Wallensteen, it is essential to assess whether sanctions are actually useful for preventing and ending conflicts and for promoting peace agreements. According to statistics, the UN has instituted over 20 sanctions since the early 1990s and while most of them deal with armed conflicts, there are others that deal with non-proliferation of nuclear weapons and preventing terrorism. The EU has a broader mandate for sanctions, as they often deal with issues such as democracy and human rights. A newcomer in this field is the African Union which has issued sanctions in case of military coups against democratically elected governments. Of individual countries, the most active ones to use sanctions is the US which is also pursuing one of the longest standing sanctions on Cuba since 1959. Recent research on sanctions has tried to evaluate their success, whether they achieve their goal in a reasonable time. According to Wallensteen, the success rates are normally between 25-50%. He noted that it is debatable whether this is enough, but also reminded that modest and varying success rates characterise most measures in international affairs, including military action.

Wallensteen highlighted that when evaluating the success of sanctions or military action, they cannot be examined in isolation, as they cannot achieve goals on their own. He stressed the importance of assessing whether sanctions can be harmful, this being the original thinking behind modern sanctions. Comprehensive sanctions, sealing off an entire country, can have harmful humanitarian consequences. Wallensteen pointed out that the success rate of smart sanctions is maybe the same but they are less harmful than comprehensive sanctions because they target those behind policy decisions and not entire populations. He stressed that in order for sanctions to work, they need to be accompanied by the so called double grip: pressure from the international community and a national opposition pushing in the same direction. Wallensteen concluded by reminding that sanctions cannot work on their own but are part of a strategy. He suggested that in any situation, a deep analysis is needed to assess whether sanctions can work and should be applied only when they have a chance to succeed.

Aleksi Pursiainen, Sanctions Team Leader from the Ministry for Foreign Affairs, began his comments by saying that sanctions can have useful effects when designed carefully. He pointed out that when looking at sanctions, the most fundamental mistake is to look at states as the entities to target. The policies of a State are the result of actions of individuals acting to advance their own interests. This is why it is essential to target the right people, the ones who can influence the policies of the state, and to understand their interests and preferences to see if and how they can be affected through sanctions. Pursiainen made reference to an article by Professor Wallensteen according to which most often the key people to target are either the decision-makers or the traders who deal with the actual international transactions. Pursiainen suggested that it is also essential to pay attention to a third group of people who could be targeted, the ones who represent the foundation of decision-making and are thus crucial to the leaders. He noted that, for instance, some researches have described the political structure of Russia as a balance struck between the political leaders and a group of very wealthy individuals who will refrain from politics as long as their feel secure in their continued wealth. Pursiainen agreed with Wallensteen that sanctions will never work alone but he felt uncertain in estimating a success rate on sanctions themselves, because it is impossible to evaluate them on their own. In addition to the ”double-grip” effect described by Professor Wallensteen, Pursiainen stressed the importance of diplomacy as a means of translating these external and internal pressures into positive changes in the policy of those targeted. Pursiainen concluded by highlighting the importance of the signalling effect of sanctions, as they show other leaders that the breach of international norms can entail heavy costs.

Katja Creutz, Research Fellow at the FIIA, commented on the presentations from a legal point of view. Her claim was that if we want targeted sanctions to be useful and effective, there must be an opportunity to scrutinise them from a legal point of view. Therefore they also need to be designed correctly. As sanctions are targeted at individuals, there need to be ways to challenge and review them. Creutz argued that sanctions need to be used within a climate of legality, respecting some basic principles such as the right to a fair trial and an effective remedy. She found this important as imposing sanctions on individuals affects their lives in a severe manner and stigmatises them. There are also cases of people having been wrongly included in sanctions lists. Creutz reminded that the controversy around the sanctions needs to be removed in order to make them effective. Sender organisations and states need to be able to provide justification for sanctions, and this scrutiny becomes even more important the further we move from the circle of political leaders. Creutz also pointed out that member states of the EU and the UN have obligations on the national level and to follow a certain sense of legality is thus important. Sanctions have to be well justified because if they are often overturned, they cannot be very effective. There have been cases of individuals and companies challenging sanctions in front of EU courts and the UN ombudsman and Creutz found it positive that the EU sanctions are periodically reviewed. However, many aspects still need to be dealt with, one of them being the problem of the confidential information that the sanctions are based on; individuals cannot contest the evidence and those who imposed the sanctions cannot give justification for the individual to be targeted. To conclude, Creutz stressed that if we want to stick to the targeted sanctions regime, the aspect of legal scrutiny needs to be included in the process. 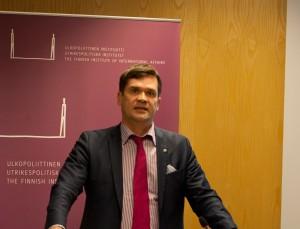 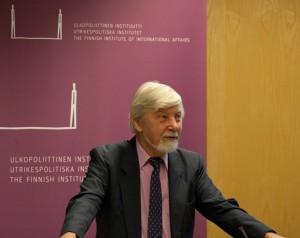 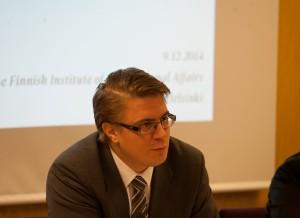 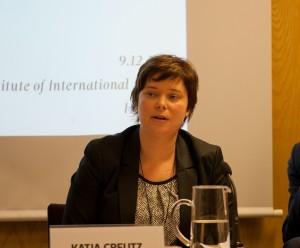