Over the past six years, Tunisia has been testing new avenues of political order. Democratic institutions have emerged, underpinned by a new constitution. However, the entrenched elites defend their acquired taste for preferential treatment, slowing down democratisation in the name of fighting jihadist terror. On top of that, rifts between Islamists and non-Islamists tend to polarise politics, making it difficult to chart a consensual way forward. What are the major challenges to democratisation? Will weak economic growth undermine this process? How does the Islamist En-Nahda movement contribute to consolidation? And what are the prospects for tackling a growing jihadist scene?

Director of the Finnish Institute of International Affairs Teija Tiilikainen opened the seminar by welcoming the authors of the joint policy study Transformation in Tunisia: The First Five Years to Helsinki for the launch of the report. Tiilikainen noted how the Arab Spring started with the revolution in Tunisia in 2011. Tiilikainen added that although Helsinki in the north might be an unusual place for a seminar on the topic of Tunisia’s democratic transformation, the Finnish Institute of International Affairs has focused in recent years a lot of research into the MENA region.

Wolfgang Mühlberger, Senior Research Fellow at the Finnish Institute of International Affairs, worked as the project leader of the joint policy study and as the chair of the seminar. He noted how the case of Tunisia shows that a transformation is not just a political change. The country is attempting to build a democratic change but is experiencing problems in consolidation. The social stratification in Tunisia has increased and the country suffers from growing levels of poverty. This has resulted in the rise of discontent and the risk of polarisation between the Islamists and the non-Islamists. Tunisia is also experiencing a strong trend toward radicalisation. The revolution in Tunisia has been a non-violent one, which Mühlberger credited to the lack of sectarianism, the quick setup of institutions, and the ability to settle disputes in a conciliatory manner, as well as to the weak military in the country.

Emmanuel Cohen-Hadria, the Head of the Euro-Mediterranean Policies Department, European Institute of the Mediterranean (IEMed) looked in his research into the topic of trust and distrust in Tunisia toward political actors. Cohen-Hadria focused on the socio-political features of the democratic transition in Tunisia. He recognised two main narratives: ”Let’s turn the page” and ”It’s time to move on”. The former discourse sees revolution in Tunisia as a success. The political elite of Tunisia who want to promote stability in the country and keep their status and position support this narrative. People representing the latter discourse on the other hand are disappointed by the development of post-revolution Tunisia. This is a very widespread feeling especially among the youth and in social media. People in this group feel that the overall situation in Tunisia is worse than it was before the revolution. In his research, Cohen-Hadria used public opinion polls and election turnouts and found a fragmentation of Tunisian society between the political elite and segments of society.

Cohen-Hadria gave four reasons to the current malaise in Tunisia. First, Tunisians have difficulties identifying with the post-revolution politicians. The leaders of the country represent an older generation with links to the old regime, among which nepotism remains strong. They have also struggled to implement the ‘goals of revolution’. Second, there has been no creation of trust in reconciliation in Tunisia. Third, corruption remains a huge issue adding to the existing malaise in the society. Last, the semi-presidential regime and coalition governments have prevented the formation of a strong opposition. This has had an effect on how Tunisians see the democratic transition. Cohen-Hadria fears that there is a risk of Tunisians associating the current post-revolution situation with the failure of democracy.

Isabel Schäfer, Senior Researcher at the German Development Institute (DIE), focused in her research on the economic development in Tunisia. In her research, Schäfer investigated to what extent the economic crisis, youth unemployment and regional disparities can form a risk for the democratisation process? Tunisia is suffering from a deep economic crisis and high unemployment rates especially among the youth. The Prime Minister has declared the difficult economic situation of the country an emergency. The country has had several governments after the revolution, the current government being the seventh. However politicians, according to Schäfer,seem to be hesitant to implement strong structural and economic reforms, as political institutional transitions are considered a priority over economic reforms.

The total unemployment rate is 15 percent and 33 percent among the youth. Actual numbers are most likely even higher as many do not register as unemployed. The youth is very concerned with the situation, as large cohorts keep entering the labour market also in the coming years. Many of those who have a job fear losing it, and there is a general anxiety about the future. In order to create enough jobs for the next generations, Tunisia should experience a growth rate of five percent. A deficit in the education system is causing a skill mismatch. The vacancies offered do not meet the demands of the unemployed. The difficult economic situation and high unemployment has increased socioeconomic dissatisfaction, especially in the interior and southern parts of Tunisia. Attempts to decentralise have been made, but many of them half-heartedly. The country has also experienced a flare-up of social protests. Salaries have not increased together with the prices. People do not feel they have benefited from the revolution or that their quality of life has improved after it.

The pressure caused by the social and economic crisis is threatening the still fragile political transition process in Tunisia, while at the same time the political and security situation influence the economic crisis. Schäfer argued that numerous milestones in Tunisia have been achieved, but more actions need to be taken in order to help the mismatch between job offer and demand. Schäfer suggested re-investing in the quality of schools and revalorising the image of non-academic professions. Actions in order to reduce territorial imbalances also need to be taken. More qualified jobs need to be created in order to help the large amount of graduates who have already been called ‘the lost generation’.

In the Joint Policy Study, Researcher Sherin Gharib and Senior Researcher Cengiz Günay from the Austrian Institute for International Affairs (OIIP) dealt with the role of political Islam in Tunisia. Their focus was especially on the analysis of the Ennahda party (En-Nahda). How has the Ennahda party transformed into a ‘system party’, and pushed some of the supporters into faith-based radicalism? Sherin Gharib started by dividing Islamism into two trends, the extremist and the moderate. The extremists neglect the universalistic claims and discourses and use radical methods. The moderate groups function within the political and economic system. This moderate group can further be divided into the Ikhwani represented by the Muslim Brotherhood, and post-Islamist parties represented by Turkey’s AKP. The difference between these two groups is that the latter has been able to transform their movement into a political party organisation. This transformation has required a process of de-ideologisation and adaptation to neoliberal conceptions.

According to Gharib, the Ennahda party has been one of the major beneficiaries of the revolution in Tunisia, even though it did not really contribute to it. Gharib divides the last five years of the Ennahda party’s development into three parts. First, the return of Ennahda into the political arena in 2011. In the second phase, Ennahda was the leader of a three-party coalition. The third phase forms the current situation where Ennahda is a junior party in a coalition. It has lost its majority, but it is still part of a coalition.

Cengiz Günay called the revolution in Tunisia a passive revolution, a revolution without a revolution. Ennahda’s participation early on helped tame the more revolutionary extremist Islamist circles, but deep and comprehensive change is hindered by power-sharing between the Ennahda party and the old elite. However, the integration of Ennahda has been an important precondition for stability in the country. Ennahda appeals especially to the growing urban middle class, who felt they were neglected under the Ben Ali regime. However, as the party’s religious identity has weakened, especially the poor and the youth have seen Ennahda as a continuation of the Ben Ali regime. This creates room for radical and extremist groups that promise an alternative to the existing system.

Stefano Torelli, Research Fellow at the Italian Institute for International Political Studies (ISPI), finished the seminar by looking into the jihadist scene in Tunisia. Violent faith-based extremism poses a threat for the Tunisian state. According to Torelli, Tunisia is a country with the highest number of foreign fighters threatening the whole process of democratisation. About 6,000 foreign fighters have left Tunisia for Iraq, Syria and Libya, and 12,000 Tunisians have been detected before they left the country. There is approximately 800 returning jihadists and more than 1,600 arrested for terrorism-related crimes. Torelli divides the development of jihadism in Tunisia into four phases. First, the ideological incubation period (2011-2012). Second, the rise of jihadist activities within Tunisia (2013-2014) when Al Qaeda tried to expand to Tunisia and new jihadist cells were established in the country, starting a new wave of attacks. Third, the state response and the rise of radicalisation (2013-2015), and finally the ‘Libyan connection’ (2015-2016), when Islamic State cells in Libya lost ground causing the Tunisian cells to return to Tunisia and increasing the threat in the country.

Torelli identifies two root-causes of jihadism: External influence includes the situation of the Algerian and Libyan borders and links with AQIM and IS cells. Internal drivers are the socio-economic disparities and marginalisation and the repressive state response in Tunisia. The marginalisation experienced now in Tunisia could be, according to Torelli, used for radicalisation.

To conclude, Torelli suggested some counter-terrorism measures that could help the situation in Tunisia. There should be more focus on the security sector and empowerment of the army. Military as well as political efforts should be focused on border areas. Participation of all parties and good coordination need to be highlighted. Torelli also saw cooperation with neighbouring states as well as western partners important. In order to prevent radicalisation, a more comprehensive counter-terrorism strategy is needed. Tunisia also needs to overcome the institutional disputes between the Presidency and the Prime Minister and distinguish between violent and non-violent Islamists. The problem of returning jihadists also needs to be solved and solutions found on how to reintegrate people returning to Tunisia. 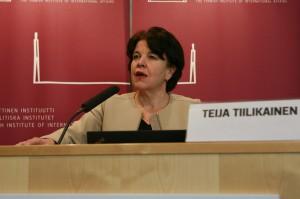 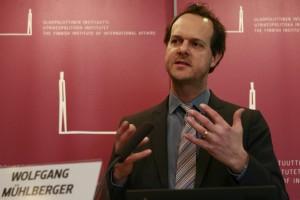 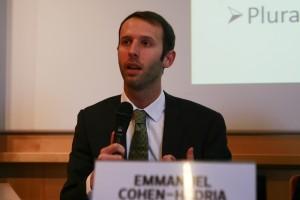 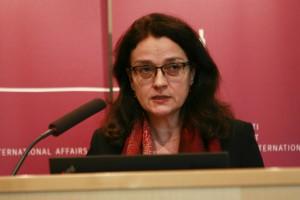 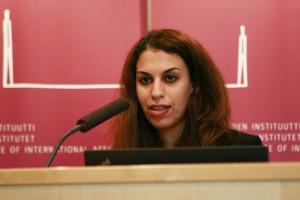 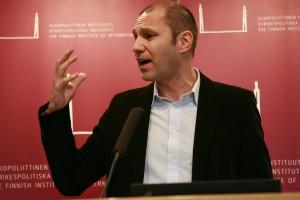 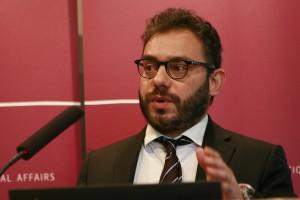 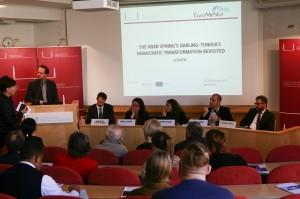