etusivu / Tapahtumat / The Future of the Palestinian Government and the...
jaa
jaa

Dr. Nabil Shaath held a colourful and capturing lecture covering all important current issues in Palestinian-Israeli relations as well as in Palestinian internal politics. He also discussed the role of the EU in fostering peace in the region and how the Union is currently conquering back the importance it used to have in this process. Dr. Shaath’s message was hopeful regarding the future of the Palestinians and the prospects for eventual peace between the Palestinians and the Israelis. He argued that there is no other option, since military solutions only bring more problems. Today, as a result of unilateral action in the region, the Middle East is far less secure than five years ago.

Dr. Shaath’s hopefulness was based on the latest events. The Palestinians offered a ceasefire which Israel then accepted and Prime Minister Olmert, for the first time, addressed the Palestinians in a speech during the meeting affirming that this time Israel would not lose the opportunity to end the cycle of violence. The next step, if the ceasefire holds, are the negotiations led by the Egyptians for an exchange of prisoners .If successful, this exchange will eventually lead to ending the embargo over the Hamas-led government and the Palestinian Territories. This in turn would enhance the possibilities of restarting the negotiations for peace.

The EuroMed meeting at Tampere, in which Dr. Shaath represented the Palestinians as a Special Envoy of President Abbas, also produced a sparkle of hope for Dr. Shaath. During the meeting, the EU managed to reassert itself in furthering the peace process. Finland, during its EU presidency, has also been successful in this sense. Dr. Shaath also stressed the responsibility of the EU in supporting the Palestinians in the future. The EU has not, up to now, been able to take advantage of the areas in which it could exert influence. He pointed out that all the important achievements in the peace process have taken place in Europe, and hoped the EU would ‘stay the course’ in its long-term policy towards the Palestinians.

As for the relations with Israel, Dr. Shaath felt encouraged. In addition to Olmert’s speech during the Tampere meeting, he also found foreign minister Livni ‘reasonable’. As a consequence of the latest events, Dr. Shaath saw that there is a new ‘divorce from unilateralism’ in the Israeli approach. Many reasons for this sudden change are possible, such as the situation in Iraq or that Israel simply wants real peace. Dr. Shaath revealed that an agreement based on the borders of 1967 is a basic requirement and that only minor changes based on a swap can be accepted.

According to Dr. Shaath, the Oslo Peace Process itself was a result of important changes, such as the end of the Cold War, the first Gulf War and the consequential entry of the United States to the region. The Oslo process was an example of successful shuttle diplomacy, but failed because the opportunity for negotiating a permanent settlement, or the final phase of the negotiations, was too short. Had the Camp David negotiations taken place a year earlier, well before the end of President Clinton’s term, a peace treaty would have been signed.

Dr. Nabil Shaath was not sure if in the light of the latest events one could say that ‘this is it’, but he assured on quite a positive note that the Palestinian unity government will gain status as an (international) actor, that the EU will regain its voice in the peace process, that reconciliation between the Palestinians and the Israelis is possible and that peace can be achieved. 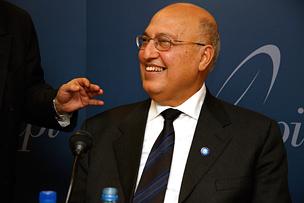 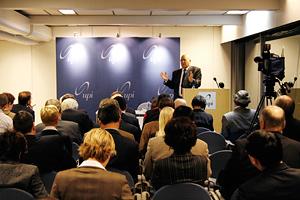