etusivu / Tapahtumat / The Impact of the Global Cold War on the Shaping...
jaa
jaa

When did America become a truly global power? What are the motivations that led the United States to engage in distant and, in some cases, relatively unknown countries? This seminar focuses on the 1970s as a key moment in the making of America’s global role. The discussions will assess the legacies of the past, and their meaning and relevance for the shaping of current US policies in the former third world.

This event will mark the launch of the Routledge book:
The Globalization of the Cold War. Diplomacy and Local Confrontation, 1975-1985

Dr. Barbara Zanchetta, The Finnish Institute of International Affairs
Author of the chapter:
Human Rights versus Cold War. The Horn of Africa, Southwest Asia and the Emergence of the Carter
Doctrine.
Dr. Zanchetta will focus on US policy in the Horn of Africa and Iran

Dr Barbara Zanchetta, Researcher at the Finnish Institute of International Affairs, began by welcoming the other two speakers and the audience to the seminar. The seminar also marked the launch of the book The Globalization of the Cold War. Diplomacy and Local Confrontation 1975-1985, for which both of the main speakers wrote a chapter. The goal of the seminar, as of the book, was to draw links between the crucial years that shaped American policy and the evolving global world order.

The period of 1975-1985, the focus of the book, was chosen because it stretches from the height of the détente to the “beginning of the end” of the Cold War. The broad-sweeping themes of the book are: the change in American policy during the time period; the struggle between a values-based policy and national interests; and the importance of history for policy makers in seeking to understand the roots and causes of conflicts in the regions discussed.

Professor Max Guderzo from the University of Florence and author of the chapter Carter’s New Look: US Foreign Policy in Latin America 1977-1980 in the aforementioned book, gave an overview of the arguments presented in his chapter. One of the main questions Professor Guderzo presented was: did the US develop into a truly global power during this time period? With regard to Latin America, Democratic US presidents have generally had the view that leaders in Latin America should accept an indirect US involvement in the area. This has been done through the concept of “enlightened self-interest”, which is presented not as safeguarding economic or political interest of the US, but as a modernization action. For example for President Roosevelt in the 1930s, the term “good neighbor” became the tool for dealing with Latin America. However, the concept of “enlightened self-interest” was more a long-term priority, while tactical priorities served medium-term interests.

When President Carter came to power in 1977, Professor Guderzo noted, Latin America as a region had been neglected for a while. President Carter, however quickly saw involvement as important in order to pre-empt a leftist turn in politics. The short- and medium-term objective was to protect the social and economic needs against attempts at social reform, and this explains why the US was even able to engage in talks with Nicaragua at the time. For the Carter administration, the protection of human rights was a core factor in empire building, and in the long-term it was meant as a strategic tool against Soviet dominance in the region. Indeed, the concept of enlightened self-interest here was rooted in the long-term perspective of a post-Cold War Pax Americana, Guderzo noted. The administration later adjusted its policy on Latin America to a pattern of firmness (action taken connected to the revolution in Nicaragua) and flexibility (handling rightist dictatorships and engaging with the moderate elements).

Finally, Professor Guderzo proposed that instead of considering Carter’s a weak presidency, it should rather be seen as a time when broad-minded decisions were made especially in Latin America, but also in the other theaters like Europe. The actions carried out allowed, in fact, the Reagan administration to reap the benefit later on and to drive the Cold War confrontations to a final match in the first and second half of the 1980s, Professor Guderzo concluded.

Dr Barbara Zanchetta continued on the topic with a presentation based on her chapter Human Rights versus Cold War. The Horn of Africa, Southwest Asia and the Emergence of the Carter Doctrine. Dr Zanchetta started by noting that the US approach towards Latin America has traditionally been very different from how it has viewed the rest of the world, even before the Cold War. The Horn of Africa especially is a region with which the US did not have strong ties before the 1970s. The Horn of Africa was at the time a region of superpower play, with Ethiopia and Somalia in territorial disputes with each other. When Carter’s presidency began both countries were also opening strong links with the Soviet Union. This development forced the US to step up its links with the two countries, and President Carter proclaimed that his effort was to understand the local level to avoid a Cold War bias; the broad vision of President Carter was to promote long-term transition of the two.

In the Ogaden War of 1977 and 1978, initially both Ethiopia and Somalia were supplied by the Soviet Union. Dr Zanchetta pointed out, that this changed the thinking of the Carter administration, as the initial ambitions of the President had to be re-examined. After the war the focus was more on the Soviet threat itself. The year 1979 was a turning point in the US strategy for engagement. Before, the US saw that the best way to counter Soviet expansionism was to engage indirectly in the conflict, and not intervene directly. However, part of the new global response strategy post-1979 was to counter perceived Soviet threats directly for example by pushing to normalize relations with China, and in this sense China was a card “played” against the USSR. In its new local response strategy on the other hand, the US started to seek greater dependence on local allies. President Carter had largely relied on the Shah of Iran to take care of US interests in the Persian Gulf states; the Shah was such a crucial pillar that relations were kept close despite reported human rights abuses of the Shah towards the Iranian people. Dr Zanchetta said that crucially when in 1979 this pillar collapsed, the “loss” of Iran meant that the US needed to turn to direct presence as a strategy, with for example Somalia entering the picture. By the 1980s the reversal of the alliances was completed.

When considering the legacies of this period of time, Dr Zanchetta emphasized that the Horn of Africa and Iran both show that regional grievances were not sufficiently taken into account due to the US focus on countering a Soviet attack. This American bias in viewing local realities in the light of global repercussions still haunts American foreign policy today.

To start off the discussion on the topic, Dr Juhana Aunesluoma, Director of the Network for European Studies at the University of Helsinki, first gave his reactions to the two presentations. Dr Aunesluoma noted that a global perspective provides a real challenge to how we study the Cold War, for a number of reasons. For one, it was an actual war in many places and they ended at different times; depending on the particular theater also the legacies of the war varied. In the end it is also difficult to say which country won the Cold War from a global perspective. Professor Guderzo responded by saying that “who won the war” can be responded differently depending on your perspective, making it an interesting discussion, with possible winners in Europe or China even. Dr Aunesluoma agreed that the year 1979 was a turning point, as it was during the period of 1975-1985 when the current world “appeared” for the first time (for example the changes in China, the sliding down of the Soviet Union). However, Dr Aunesluoma was skeptical that 1979 was the end of the Cold War, as on the level of attitudes, in particular the US still stressed “containment”, and the emphasis put on human rights was also part of a classical Cold War stance. Finally Dr Aunesluoma noted that while recent scholarship has emphasized the positive aspects of the Carter years, the critical view of the Carter Doctrine is that by using proxies instead of direct involvement the effect was rather to extend the conflict.

The question of whether the Cold War was an economic war was also raised from the audience. To this Professor Guderzo responded that indeed with the arms race a prime example, it was also an economic war, but an imbalanced and mismatched one because of the great disadvantages of the Soviet Union. Another question was on the status of Somalia today. The speakers agreed that the local causes and conditions of the conflict have still not been sufficiently examined and that Somalia today is rather framed, for example, in terms of an Al-Qaeda safe haven – not a large departure from how Somalia was perceived during the Cold War. 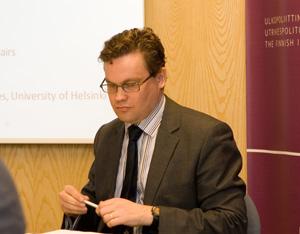 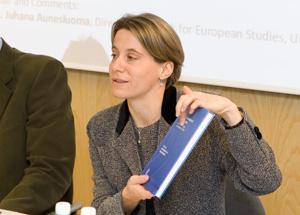 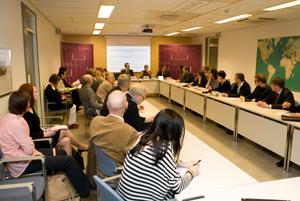 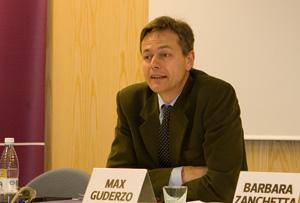 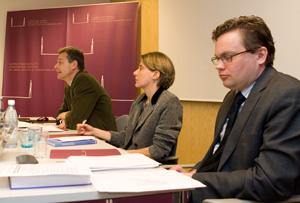