One year into the Arab Spring, the upheaval in the Middle East shows no sign of abating. The situation in Syria is rapidly regressing and has drawn in regional actors as well as the increasing attention of the great powers. It is now clear that a wider regional readjustment is ongoing. The new normal has not yet set in. New elements, such as popular demands for democracy, have now blended with older geopolitical issues, such as Iran’s nuclear ambitions and the rise of the BRICs. These changes are transforming the Middle East’s geopolitical chessboard, as new actors emerge and old actors are adapting their regional strategies. This roundtable examines the changing Middle Eastern context and Israel’s role and perspective on the current situation. The two main issues are Syria and Iran’s nuclear program.

The seminar aimed to provide an Israeli perspective on recent changes in the Middle East, and how these may be reflected in the regional actors’ approaches to the civil war in Syria and Iran’s nuclear program.

Dr. Dan Schueftan, the Director of the National Security Studies Center at the University of Haifa, started the seminar by presenting his views on a range of issues. His main argument was that wherever Israel looks, there are challenges. These challenges range from existential ones (Iran’s nuclear weapons program) to conventional military to political ones. That the region as a whole was getting even more unstable and violent was according to Dr. Schueftan clear, as was the fact that the ‘Arab spring’ had failed; having been high-jacked by by Islamic radicalism.

Dr. Schueftan then argued that the picture of discontent by Israeli citizens that is painted by both Israeli and other international media is incorrect, that most Israelis basically think they have a good life. This he maintained was most important, that subjectively Israelis feel that the country is a success, because it would allow the state to continue to exist amid increasing regional hostility and uncertainty.

On Iran, Dr. Schueftan opened by commenting on the barbaric nature of the regime but the promising and gifted society, which yearned to live in a pluralistic society. For this reason, he argued, that in Iran any regime change would be good. On Iran’s nuclear program, Dr. Schueftan felt Israel and the international community had lost the first round, conceding that Iran already has the capabilities to build a nuclear bomb. The question in his mind is, whether outside powers can affect the Iranian leadership’s decision on whether to move from a bomb to building a weaponized arsenal. The key threat for Dr. Schueftan is not that Iran would strike Israel with nuclear weapons as soon as it had them, but that 6-7 other regional states would quickly seek to acquire them, which in turn would affect the nuclear calculations of a number of states around the globe.

On Syria Dr. Schueftan was pessimistic, arguing that there were no good options: while Assad is a barbarian, the people that would come to rule as a result of regime change would be very bad for both Israel and the Syrian people.

The first comment to Dr. Schueftan’s speech came from Captain Teemu Saaressalo, from the National Defence University in Finland. His comments focused on learning within the Israeli Defence Forces (IDF) between the 2006 war in Lebanon and Operation Cast Lead in 2008-2009. Captain Saaressalo’s primary message was that Israel had information war dominance over Hamas during Operation Cast Lead. Almost all information about events on the ground came through the IDF, and rocket attacks against Israel were emphasized. He compared this to the 2006 war, where the Israeli and international media focused on Hezbollah successes, IDF failures and, barely mentioned Hezbollah rocket attacks.

The second comment came from Dr. Timo Behr, Researcher at the Finnish Institute of International Affairs. He challenged Dr. Schueftan’s view that the ‘Arab spring’ had become a failure, and argued that it was unfair to equate all actors with Muslim radicalism. Dr. Behr also wondered what a limited strike by Israel would accomplish if ones perspective was a decade out, pointing out that Iraqi efforts to acquire a nuclear weapon were boosted after Israel’s 1981 attack on Osirak. Finally, Dr. Behr was curious about what Israel’s new regional alliances-partners might be.

The question and answer session saw forthright exchanges of views on the usefulness of striking Iran, how events on the Sinai peninsula are affecting Israel-Egypt relations, the impact of UNIFIL since 2006 and the future of Israel’s peace treaties with its neighbours. 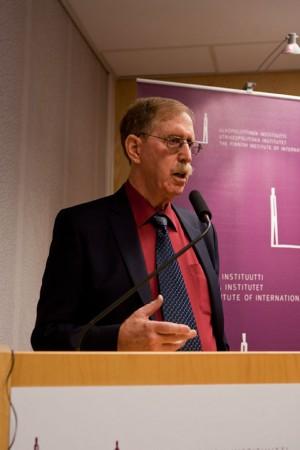 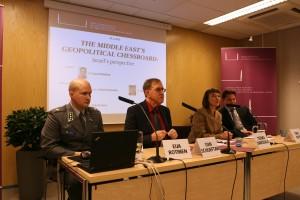 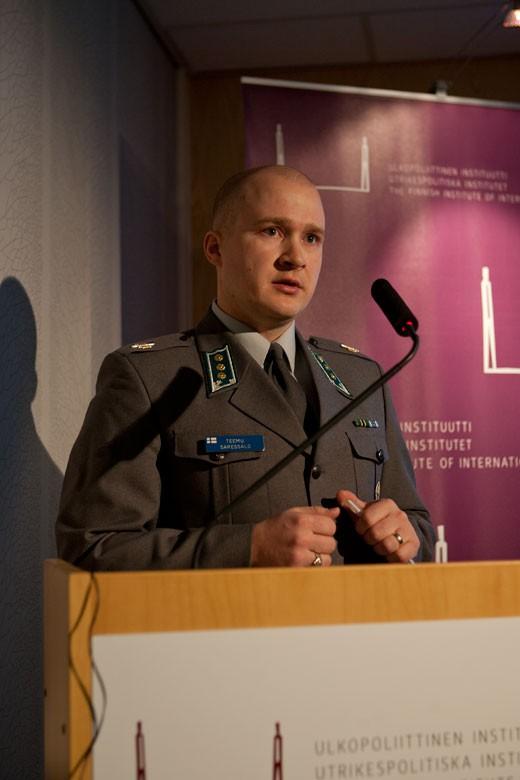