Peace operations are in a state of flux. In the fast changing global context, long held positions are now being questioned as national interests change and emerging powers become more engaged in peace operations.

The strategic uncertainty facing peacekeeping thus requires a forward-looking agenda to examine how the changing international balance may affect the concepts and practice of peacekeeping, including the nature and goals of peace operations, who is involved and where interventions may occur.

The SIPRI report, The New Geopolitics of Peace Operations: Mapping the Emerging Landscape, explores the emerging peacekeeping landscape and discusses some of the key issues that shape this terrain.

The report suggests that while emerging powers are not looking to be ‘norm breakers’ or offer an alternate paradigm for peacekeeping, they are very much looking to be ‘norm revisionists’ influencing the make-up, design and conduct of contemporary and future peace operations.

Director of the Finnish Institute of International Affairs Dr Teija Tiilikainen briefly introduced the topic of the seminar, the new SIPRI Policy Paper. She mentioned the role of the Finnish Ministry for Foreign Affairs in financing the study. According to Dr Tiilikainen, the topic is important for FIIA; the director of the Institute’s Global Security research programme, Dr Aaltola, would be commenting the report, and the Institute itself studies emerging powers, particularly in Asia and Latin America.

Professor Kari Möttölä, Special Adviser at the Ministry for Foreign Affairs, explained the role of the Ministry in the study. Its activities include supporting research that benefits strategic planning, and promoting think tank research. In his view, SIPRI has asked in its report key questions on the rebalancing of the world order, the responsibility of governments, and other issues. He said that the regime of peace operations is being tested and adapted to the realities of global change. The 2011 intervention in Libya did not teach clear lessons for the future. It remains to be seen whether a consensus will be formed regarding peace operations, or whether decisions will be made ad hoc.

Programme Director Dr Neil Melvin from SIPRI provided an overview of the background and themes of the new study. SIPRI has been following conflict management for a long time. The post-Cold War discussion was on a more practical level: how to make peace operations more flexible? Recently, there has been more of a focus on political issues. For example, questions regarding the use of force have arisen from countries in the Global South. The new report presents some of the initial findings of an initiative launched by SIPRI, which also includes a series of regional dialogues.

Syria highlights some of the relevant issues. The conflict is surrounded by a political struggle, which is linked to a wider context of changing interests, ambitions and capacities. There is a debate on the use of force and on the proper institutions for managing the conflict.

SIPRI has studied the implications of the shift from unipolarity to multipolarity. Dr Melvin identified three drivers of this change: the relative decline of the West, the rise of the countries of the South, and the dissatisfaction with the Western approach to peace. He also remarked that there are indications of a decline in the amount of conflict in the world. Will the shift of power present a challenge for this relative peacefulness?

He then explored possible scenarios for the future of peace operations. The first one is a consolidation-evolution of the existing approach (which involves the inclusion of the emerging powers). The second option he called ‘back to the future’, a return closer to the traditional Cold War peacekeeping. The last scenario is one of fragmentation, where the role of the international community is diminished and states set the agenda for themselves.

Dr Melvin gave an outline of the new report. It deals first with the current approaches to peace operations and the new dynamics between the established and emerging powers. It then focuses on the contribution of seven countries to peace operations: Brazil, China, India, Indonesia, Russia, South Africa, and Turkey. The paper also touches upon the challenges to existing norms in this domain. Finally, future prospects of peace operations are treated.

Dr Melvin analysed the way conflicts and peace operations have changed in the past two decades. Interstate wars have practically stopped and have been replaced by intrastate conflicts. There is also a new understanding of the causes of conflict: economic causes, criminal phenomena like piracy, and terrorism play a part. The West has promoted its own agenda, which includes peacebuilding, supporting democracy, the rule of law, market economy, and human rights. Peace operations have become more intrusive and robust; they have incorporated civilian components, while peace treaty negotiations have declined.

SIPRI Senior Researcher Sharon Wiharta presented some of the findings of the study in more detail. Regarding the dynamics between the two types of powers, she mentioned the diffusion of power, financial constraints in established powers on large-scale operations, and a trend towards triangular cooperation. There are both competition and new alliances (BRICS, IBSA) between the emerging powers.

The seven countries examined have different motivations for their contributions. Brazil, China, and Indonesia wish to be seen as important global or regional players. In India, the ”backbone” of peacekeeping, it is debated whether the country should continue such a large-scale deployment. Russia seeks to develop the role of the CSTO. South Africa is aligned with a pan-African agenda. Turkey has a new focus on mediation, with less emphasis on peacekeeping.

Ms Wiharta also talked about the challenges to existing peacekeeping norms. The political and moral implications and the fundamental purposes of peace operations are increasingly discussed. Large-scale and time-consuming operations are being called into question. Ms Wiharta described the emerging powers as norm revisionists who criticise the state building focus in a nuanced way.

Ms Wiharta listed some of the future prospects of peace operations. New priorities are likely to emerge, with a trend towards smaller political missions, and a focus on mediation and conflict prevention. Conflict management will be practiced in a more flexible cooperation between the UN, regional organisations and informal frameworks. Transnational expert communities and civil societies are going to have a more prominent role. The evolving character of armed conflict will affect the development of peace operations.

Next Dr Melvin elaborated on the implications of the recent changes for the future. He believed that the paradigm of conflict management is not in question, but only the application. He mentioned Syria as a challenging situation, characterised by paralysis, lack of agreement on the nature of the conflict, and a threat of regionalisation, of the return to a Cold War type of conflict. The nature of the co-operation in a multipolar world is still unclear: will it involve two big actors or many smaller ones? How to create an integrated multilevel conflict management system? Diplomacy, broad dialogue, and a common understanding will be needed to move forward.

FIIA Programme Director Dr Mika Aaltola commented on the report, analysing geostrategic shifts and trends. He found the approach of the report reasonable: it looks for several, interactive processes rather than one phenomenon to explain the changes in conflict management. He also stated that some of the ”newness” of the new geopolitical landscape is due to hype.

Peacekeeping is dependent on power shifts, Dr Aaltola noted. The power of the United States is in decline, and the question of who will fill the vacuum is a vital one. The power will flow not only to states but to institutions as well. Climate change and technological change are factors of structural power. New ideas on the nature of conflict and peace produced by epistemic communities also change practices. Applying the technology of remote warfare in peace operations could be investigated.

Dr Aaltola named some of the main trends. According to him, there is a diffusion of power from state-actors to new forms of power. The Asia-Pacific region is gaining gravity, a shift which is linked to international trade. There is a new focus on global flows and interconnections. He also expects a move from security operations to the building of resilience. Finally, war is waged more and more using remote means.

During the question and answer time, a wide range of topics were discussed, including conflict prevention, the perception of a competition between the North and the South vs. emphasising a win-win point of view, resource management, private commercial actors in the peace operation sector, and alternatives to the ”liberal peace” approach. 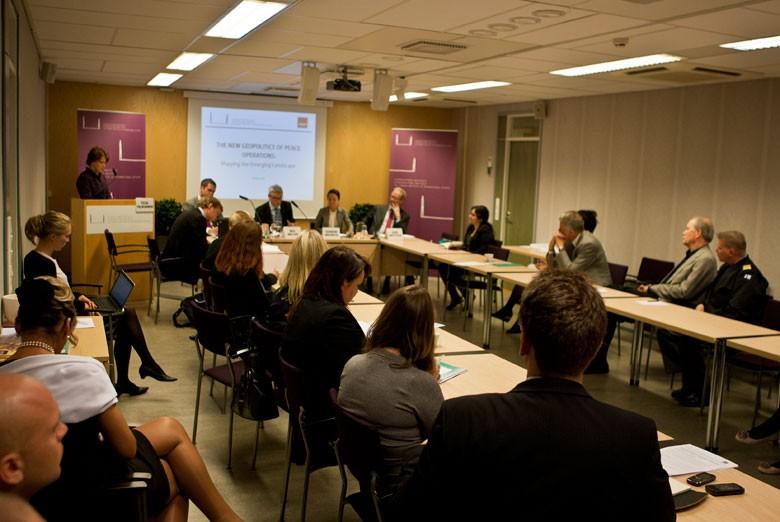 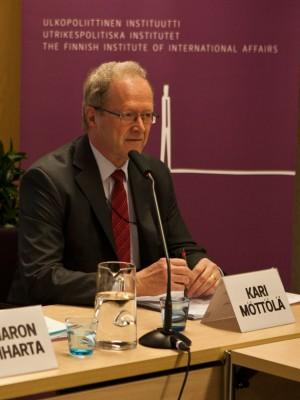 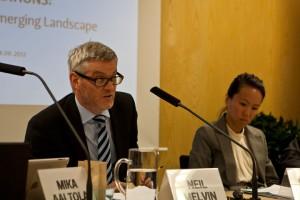 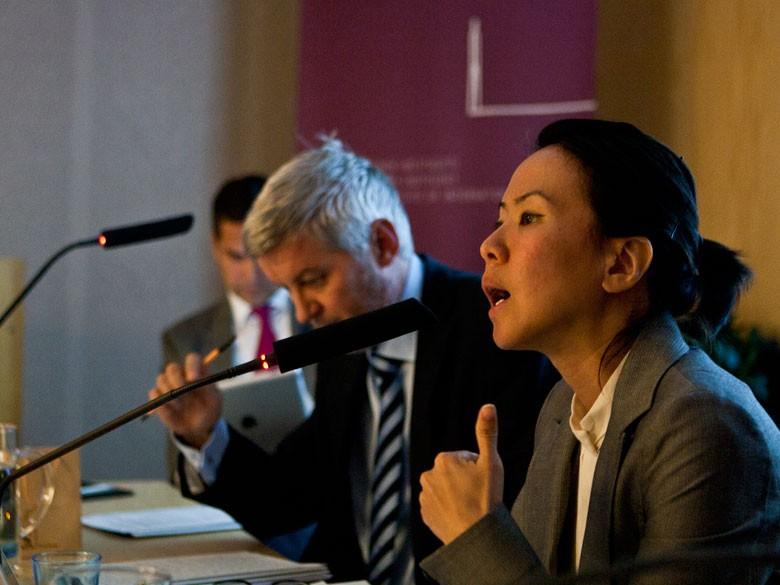 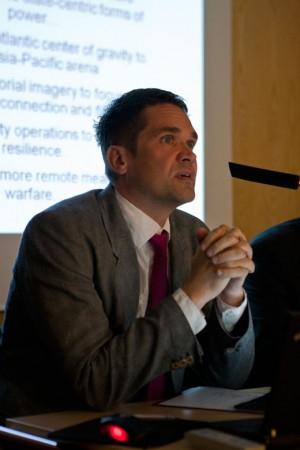