Worthy of note with the two presentations was how both speakers saw the centrality of the Israeli policy of unilateralism to recent events in Israeli-Palestinian conflict, but with Dr. Khatib seeing it as the cause of much that has happened subsequently, whilst Prof. Susser seeing it as the outcome of prior events.

Dr. Khatib presentation was pessimistic, stating that the situation has got worse in recent years. The election of the Hamas government is not just an important moment in Palestinian history but also in that of the Middle East, it being the first “Islamic fundamentalist” party, to use his words, to come to power by an election. He argued that Hamas in power was the outcome of the Sharon government’s policy of ignoring the Palestinian Authority (PA) and acting unilaterally. He believes that Israel does not want a functional PA with the unilateral withdrawal from Gaza demonstrating this as it allowed Hamas to claim it as victory strengthening the extremists. The continuation of settlement activity in the West Bank is further evidence of this Israeli strategy in his opinion. Instead both the Palestinian government and the people are becoming more radical, with the economic collapse due to the Israeli blockade being central to this. Dr. Khatib said that many more moderate voices in the occupied territories had believed that the Hamas government would simply fail when faced with the realities of governing – collapsing or being voted out – but the Israeli and international sanctions against the government is actually giving them an excuse for failing to deliver to the people and maintaining their popularity.

Prof. Susser took the opposite view, believing that Israel has a vested interest in supporting the “state-ness” of its neighbours including the PA. Without its neighbours being strong states, chaos on Israel’s borders will continue to threaten Israeli security. Hamas in power in the occupied territories is one indicator of this danger, as is a weak Lebanese state that allowed Hezbollah to become so powerful in the south, endangering Israel’s north. He believes that there is virtually no debate anymore in Israel, and a two-state solution is seen as the only option for Israel and the Palestinians. Israelis realise that if the Palestinians do not get their own viable state soon, the demographic balance in between the Mediterranean and the Jordan river will favour the Palestinians who will then realise they have more to gain in one state where Jews will be a minority. Yet the lack of reliable interlocutors on the Palestinian side has forced Israel into disengaging unilaterally – via the wall/fence in the West Bank and the Gaza evacuation.

Taking a wider perspective, Prof. Susser made the interesting point that the future of the Middle East will be determined by the non-Arab states who are now the powers of the region: Iran, Turkey and Israel. He points to the Lebanon war of this summer being the first skirmish of this conflict. Hezbollah is essentially a proxy of Iran, and the Arab states, even the “Arab powers” such as Saudi Arabia and Egypt were essentially only spectators to the conflict with no influence over it. 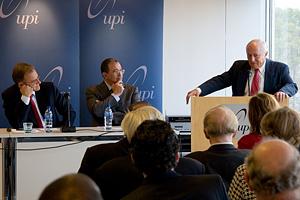 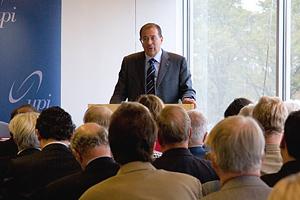 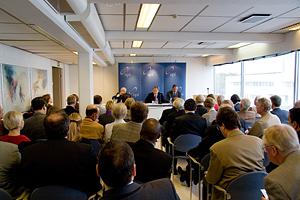