Dr. Yury Fedorov is an expert in Russian foreign and security policy. Up to January 2006 he was a professor of the Moscow State Institute of International Relations (MGIMO ). Since January 2006 he has been Principal Research Fellow at the Royal Institute of International Affairs, London; and also Associate fellow of the Czech Association for International Affairs. Since 2008 he has been living in Prague, the
Czech Republic. Dr. Fedorov is the author and editor of a number of books and numerous articles and research papers published in Russia, the USA and Europe.

Dr. Arkady Moshes opened the seminar by welcoming the audience to listen to Dr. Yury Fedorov’s analysis on the implications of President Medvedev’s new amendments to the Russian law on defence.

Dr. Yury Fedorov started the session by presenting the amendments to the law. The amended “Law on Defence” allows Kremlin to dispatch troops outside Russia for four purposes: to counter armed attacks against Russian armed forces, other troops or bodies deployed beyond Russia’s borders; to counter or prevent an armed attack against another country if this country has requested Russia to do so; to protect Russian citizens abroad from an armed attack; and to combat piracy and guarantee the safety of shipping. Russian politicians and military leaders indicate that the new law is topical because of the war on Georgia and that it is necessary because of a new much more weighty Russian role in international politics. Dr. Fedorov emphasized that in some cases Russian military activities violate not only international but also Russian law; for example the aggression against Georgia was a deplorable violation of Russian legislation. Moscow’s claim that it was a ‘peace-enforcement operation’ contradicts the clause in the Russian law which states that Russia’s troops may participate in such operations by a decision of the UN Security Council only.

Because of its unclear and vague wording, the new Russian defence law radically expands the range of circumstances in which Moscow considers it legitimate to send troops abroad, as well the list of states, in which Russia may station armed forces in accordance with its law. It does not specify what exactly ‘an armed attack’ means, how many Russian citizens are to be attacked to justify Russian intervention or whether the Russian government has to obtain an official sanction to act in a foreign territory from the UN Security Council or from the authorities of a particular state where Russian citizens are attacked. The right to defend Russian troops on foreign soil is of special importance for Russia’s relations with Ukraine and Moldova. Skirmishes involving Russian servicemen in these countries may give Moscow a pretext of military intervention.

The best-case scenario according to Dr. Fedorov is that President Medvedev is hoping to win the sympathies of the Russian military milieu in order to strengthen his position vis-à-vis Putin. However, in practical policy, Medvedev is and will be rather cautious and not prone to initiate new wars in the post-Soviet space and nearby. According to the worst-case scenario Russian intelligence services may ignite disturbances and ethnic clashes in Sevastopol or in Estonia and Latvia which may be used by Moscow as a pretext for military intervention or at least for threatening with such an intervention. Although being a worst-case scenario, Dr. Fedorov pointed out that there are numerous precedents in Russian history which demonstrate that worst-case scenarios can become reality.

Russo-Ukrainian armed clashes over Sevastopol will not be so much a military as a political challenge for Europe and the West as a whole. Even though Ukraine does not belong to these organisations, if NATO and the EU failed to respond to Russian intervention in Crimea with strong political and economic measures, their strategic relevance would be seriously undermined. Russian military intervention into the Baltic States would have much more dangerous sequels. It might result in an armed conflict between Russia and NATO, which could easily evolve into a regional war. In this light NATO should make it quite clear that it will defend the Baltic States. Moscow will hardly intervene into the Baltic States if NATO’s strong response is probable.

In the Q&A session the new law on defence was discussed further. Dr. Fedorov pointed out that the handling process of the new law was very quick as President Medvedev sent the draft law to the State Duma in August and it was adopted in 2,5 months. It was discussed that the law is rather of a mandating than of a restricting nature. The law can be used both for good and for bad as it allows Russia to send troops for peacekeeping but also for military interventions. The importance of the Russian military reforms was also highlighted from the audience. According to a view from the audience, the military reform means that Russia thinks there is no risk of an attack from the West and this point has not been discussed enough. Dr. Fedorov thinks the reform may make the armed forces more effective and battle-capable. Dr. Fedorov also highlighted that in his opinion we should look more at Russia’s military exercises to find out what the country is preparing. The Russian intervention to Georgia was also discussed in the Q&A session. According to some views the intervention was a test for Europe to see what its reaction could be. Also the view, according to which President Medvedev is more for democratization than Putin, is debatable when thinking about the Georgia war, as it was Medvedev who ordered the troops to Georgia. It was also discussed that the law is both for domestic and international purposes. It sends a strong message for Russian citizens; they can really believe in the country’s strength. 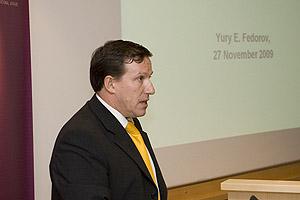 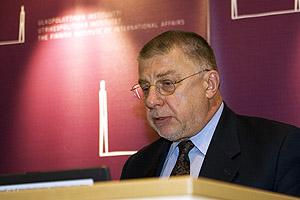 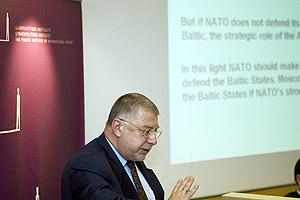 Yury E. Fedorov: Medvedev's amendments to the law on defence: The consequences for Europe?