The ”Arab Spring” has shaken the post-Cold War regional balance of the wider Middle East. By imploding the authoritarian structures of key Arab states, the Arab Spring has not only encouraged intense and often violent domestic confrontations, but has also intensified old rivalries for regional power and influence. Syria has become the lightning rod for many of these conflicts. While the Syrian conflict is increasingly spilling over into neighbouring countries in the Levant, it is simultaneously pulling in other regional players, in particular the Arab Gulf countries and Iran. This seminar will look at the wider impact of the Syrian conflict and consider how new and old rivalries and alliances are reshaping the post-Arab Spring regional order in the Levant.

The Syrian Crisis in its Regional Context
Ari Kerkkänen, Director, Finnish Institute in the Middle East

After a brief introduction to the topic of the seminar by FIIA Director Dr Teija Tiilikainen, Dr Ari Kerkkänen, Director of the Finnish Institute in the Middle East, presented the regional setting of the Syrian crisis. He began by describing the current mind-set of ordinary Syrian people: they are tired and want to get back to normal life. Dr Kerkkänen’s main argument was that there can be no peaceful reshaping of the political order in the region without stability in Syria. The conflict radiates into Syria’s neighbourhood, just as stability in the country would translate into stability in the region. Syria is significant because of its exceptional location at the geographical crossroads of the Middle East and on the Sunni-Shia divide of Islam.

Dr Kerkkänen discussed the different power struggles in the region, and the relations between Syria on one hand and countries like Turkey, Iraq and Saudi Arabia on the other. He remarked that global superpowers are part of the regional order: the US in particular plays a significant role. One key factor that must be taken into account in order to understand the regional order is identification, which is the basis of loyalties across state borders. People identify first and foremost with their sect, second with religion and third with the state. Non-state organisations are thus able to recruit members in the wider region.

30 years ago there was an insurgency by the Muslim Brotherhood which received arms from outside. This was the model that the regime had in mind when it began to crush the uprising in 2011. This idea was not totally wrong, but there are differences between the two conflicts.

Dr Kerkkänen described the sides of the proxy war that is being fought, with the opposition supported by Turkey, Saudi Arabia and Qatar. He saw two possible outcomes of the situation. The first one is a scenario where President Bashar al-Assad’s regime is toppled forcibly through outside intervention. According to Dr Kerkkänen, Islamists would in this case become part of the government, which Saudi Arabia and Turkey would not be satisfied with. Radical Islamists are now being used as a tool to oust Assad. Dr Kerkkänen saw this scenario leading to prolonged conflict and suffering.

The second scenario is a political solution, which must be based on reconciliation. Dr Kerkkänen believes in the possibility of a diplomatic solution. Reconciliation is dependent upon a social agreement between sects. Israel has been silent about the developments in Syria. Israel faces a dilemma: It is fighting a proxy war in Lebanon, and a peace agreement would have meant sacrificing the Golan Heights. Syria is the ”enemy they know”. But it is also part of the axis of Israel’s worst enemies together with Iran and Hezbollah. On the other hand, if Assad falls, it could give a boost to Hamas. The preferred short-term solution for Israel is the present regime that keeps weapons of mass destruction and the Islamists at bay. This is not however a viable long-term alternative. Rather, as Dr Kerkkänen put it, the current situation is ‘lose-lose’. He also mentioned the nationalist aspirations of the Kurds, for whom the conflict has created new openings.

Dr Kerkkänen was concerned that the Levant may be entering an era of perpetual instability, unless the divides are superseded. The rapprochement of all the actors is needed, or Syria could take the whole region into chaos. Finally, answering a question from the audience, Dr Kerkkänen reminded that although the majority of Syrians do not support radical Islamists, these control most of the rebel territories. They will demand to be part of any new regime.

Dr Jubin Goodarzi talked about the alliance between Iran and Syria. Iran’s perspective was made clear by quotes from Iranian officials characterising Syria as ”the golden ring of resistance against Israel” and the conflict as one ”between the axis of resistance and its enemies”. The alliance formed in 1979 is significant because of its impact on Middle Eastern politics, its long duration, and the geopolitical location of the two countries. It has been argued that whoever wants to control the Middle East must first control Syria. Iran’s central position also makes it a ”strategic prize”. Dr Goodarzi explained why Syria is important to Iran: it is Tehran’s only longstanding ally, and it offers Iran access to the Levant and a conduit for supplying Hezbollah with Iranian weapons. There is an ideological dimension, which has to do with the common stance against Israel. The two countries also cooperate on many other levels. Finally, Syria acts as a tripwire for military strikes against Iran in order to destroy its nuclear programme.

Dr Goodarzi reviewed the history of the alliance, which he divided into seven phases. It emerged from 1979 onwards, with Syria giving military and diplomatic support to Iran, and then Iran helping Syria. The defensive alliance evolved over time. After initial conflicting interests, the two allies consolidated their relationship in the mid- to late 1980s. Then the two cooperated to contain Saddam Hussein’s Iraq. After the Kuwait invasion and the end of the Cold War the cooperation continued in terms of ballistic missile technology. After the Iraq war, the alliance was reinvigorated. The latest phase is Iran’s involvement in Syria’s unrest. In the 1980s, Syria was the dominant partner, whereas in the 2000s, the power structure had changed in favour of Iran.

In Iranian and Syrian foreign policy, the regime’s survival is most important, and national security comes in second place. Syria also wants to regain the Golan Heights, and maintain its veto power over politics in Lebanon. For Iran, being a major regional player in the Persian Gulf and securing its flanks is important. Relations with Iraq are a priority. The ideological regional agenda is pan-Arabism for Syria and Islamism for Iran.

Dr Goodarzi explained how Iran’s policy has evolved. When the Arab Spring began, Iran welcomed the revolts, which it portrayed as Islamist uprisings. However, in the case of Syria Iran was taken by surprise and faced a Hobson’s choice: either support the Assad regime and be seen as a hypocrite, or take the risk that a new regime emerges that does not want to cultivate close ties with Tehran. Iran decided to support Assad, and has provided various types of aid to Damascus, from crowd control equipment and assistance in monitoring communications to arms, oil and personnel. When the crisis did not end quickly, Iran began to doubt if it had made the right choice and engaged in talks with the opposition. By the end of 2011 it was clear that the conflict was turning into a proxy war where regional and international actors played a part. Iran, Hezbollah, and Iraq sided with the Syrian regime, while Turkey, Saudi Arabia, and Qatar supported the opposition. The United States imposed sanctions on Syria, but Russia and China blocked the UN Security Council resolutions to intervene. Iran welcomed the appointment of Kofi Annan and later Lakhdar Brahimi as mediators, because it wants to be part of a multilateral process to determine the future of Syria. It has continued to provide support to Assad, but is now looking for exit strategies.

From Iran’s perspective, the ultimate goal of the West and of Iran’s rivals is to prise Iran and Syria apart and achieve regime change in both countries. Iran believes that the sanctions that are used to pressure the Islamic Republic may never be lifted, and if the Syrian regime falls, the focus will shift to Iran. Tehran is also concerned with the humanitarian tragedy, and the risk of a spillover into Lebanon or Iraq. Hezbollah’s low popularity is worrying for Iran, but Tehran’s worst nightmare would be regime change both in Syria and Iraq.

Finally, Dr Goodarzi explored possible future scenarios in Syria. One is the survival of the regime in part of the country; another is its collapse, leading to chaos and continued civil strife. The current regime could be replaced by a secular or Sunni Islamist regime, an outcome which Iran fears, or the parties could reach a negotiated settlement. This last option is best for Iran. It knows that there is no going back to the good old days of the alliance, but at least damages can be contained. Moreover, Syria’s dissolution and the spillover of the conflict or its transformation into a regional sectarian war would be disastrous for Iran. A political solution would also help Iran in its isolation caused by the policies of Mahmoud Ahmadinejad’s administration. A national unity government is in the interests of Iran, if it is not hostile to the Islamic Republic. Iran cannot go on supporting Assad indefinitely, because of the sanctions and its domestic problems. In conclusion, Dr Goodarzi expressed his view that any military action should aim at bringing the warring parties to the negotiating table. He also answered an audience question about Iranian policies, noting that there is some divergence among politicians’ views on Syria, as well as a disparity between the official government position and public opinion.

Next was time for FIIA Research Fellow Dr Timo Behr’s comments. He said that the Arab Spring represented a change in intensity in the regional dynamics, but they remained the same otherwise. The peoples’ demands in face of oppressive regimes were one element, along with the sectarian identity struggles and the regional competition for hegemony, which was the focus of this seminar. Since the Iraq War these underlying dynamics have been more acute. There is a geopolitical cold war between the Saudis and Iranians, of which Syria is now the epicentre. It is not necessarily never-ending, but neither side is currently strong enough to win. Both Saudi Arabia and Iran can tolerate this for the time being, as it represents a second best solution for them. For Iran to accept a national unity government in Syria, an option previously discussed, it would require strong reassurances.

Dr Behr also commented on the role of the Gulf countries. Although they all have the shared interest of replacing Syria’s Alawite regime, they are not a monolith: recently Saudi Arabia has imposed itself as the main supporter of the opposition over Qatar, the two of which are rivals for regional influence. While Qatar has favoured the Muslim Brotherhood, Saudi Arabia has focused its support on the moderate FSA, as well as conservative Salafist groups. The Gulf countries will play a strong role in forming the post-Assad regime. This makes it unlikely that Syria will develop a democratic system of governance, the original goal of the revolution.

Finally, Dr Behr reflected on the wider post-Arab Spring regional dynamic, the role the of the Muslim Brotherhood, and the question to what extent the violence in Syria will affect other parts of the region.

The discussion that followed touched on a wide range of topics. These included the approach of the United States to Syria and the possible repercussions of a military strike in response to the chemical weapons attack in August. The refugee crisis was also discussed, as was the role of religion in the conflict. Among the other topics were the policies of Russia and of the European Union. 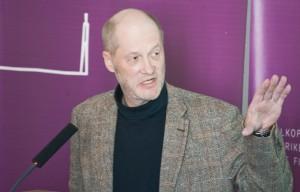 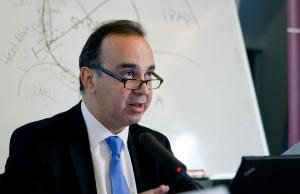 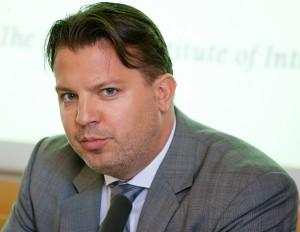 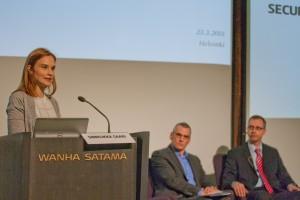 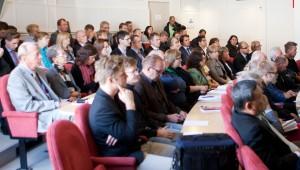