etusivu / Tapahtumat / The Role of Small States in the United Nations...
jaa
jaa

Do small non-permanent members in the UN Security Council have any say in global politics? How should the UN Security Council be reformed in order to get even the small voices heard? Isn’t it rather curious that an instrument aiming at levelling global disparities is in itself riddled with inequalities and the politics of the strongest? And what is Finland’s view on all of this?

Questions to the Minister

Mr. Søren Jessen-Petersen, Head of Washington Office, Independent Diplomat
Mr. Jessen-Petersen is a prominent international civil servant. He joined the Independent Diplomat in January 2008 and is also Lecturer at the School of Foreign Service at Georgetown University. Since 2006 he has been a Guest Scholar at the United States Institute of Peace. And prior to this he was Special Representative of the U.N. Secretary General and head of the UN Mission in Kosovo, at the level of Under Secretary-General. For many years Jessen-Petersen served with the UN High Commission for Refugees, in which his most recent position was as assistant high commissioner in Geneva (1998–2001).

Dr. Michael Butler, Charge d’Affaires, US Embassy in Helsinki
Michael A. Butler was assigned as Deputy Chief of Mission in Helsinki since June 2008. He is now heading the Mission until the arrival of a new Ambassador. Mr. Butler earned his Ph.D. in American History in 1980 from the University of Virginia and entered the Foreign Service the same year. He has since served around Europe and South America as well as in the State Department, most recently as a Director and as Acting Deputy Assistant Secretary of State for Multilateral Affairs in the Bureau of Democracy, Human Rights and Labor.

Ms. Marjatta Rasi, Under-Secretary of State, Ministry for Foreign Affairs
Ms. Rasi is an esteemed Finnish diplomat who has served as Permanent Representative of Finland to the United Nations and as the President and Vice-president of the UN Economic and Social Council. She is chair of the advisory group to the UN Peace Building Fund, Member of Board of the International Peace Institute, and has served as the Director General, Department for International Development Cooperation at the Ministry for Foreign Affairs.

This seminar is one of the events of the Finnish campaign to become a member of the UN Security Council in 2013-14, more info: http://formin.finland.fi/UNSC2013-14_Brochure/

Professor Raimo Väyrynen opened the seminar with a remark on the limited power of small member states in the United Nations. Small countries form a great majority of the UN members. However, they hardly ever vote in unison and the power of the resolutions passed by the General Assembly remains restricted.

Permanent members (P5) of the UN Security Council (UNSC) have critical influence on the decisions of the world organization. They also have the possibility to exercise binding power on other members. In some respects, permanent members have turned out to be the “great irresponsibles” by resorting to unilateral uses of force.

The distribution of power in the international system is changing rapidly, and the emerging powers are demanding their place in the sun. Yet, the reform of the UNSC is way ahead in the future as the present permanent members are reluctant to let the newcomers – such as India, Brazil, Japan and Germany – into their exclusive club. A minimum condition for the future legitimacy of the Security Council is that its methods of work are transformed so that those members who are now excluded from effective influence, can face a more transparent and participative Security Council.

Foreign minister Alexander Stubb saw the seminar as a strong advertisement and part of the campaign for Finnish membership in the UNSC for the term 2013–2014. He stressed that the whole system of international institutions is in turmoil. In the post WWII-era the UN was a linchpin between international institutions but also between the two sides of a bipolar world. We are now at a crossroads, with a choice between big state, superpower thinking and a multipolar world, based on international institutions. Stubb remains a strong advocate of the latter. Strong nation state rhetoric led to two world wars in the 20th century, and even today, it is the wrong way to go.

The UN needs a strong EU and vice-versa, Stubb said. As UN is the forum, EU is the instrument for driving human rights, global stability, fighting poverty and climate change and nuclear non-proliferation. However, the world organization is not doing well at the moment. The EU, the NATO and even the African Union have been able to transform after 1989–1991. At the same time, the UN has been marginalized by the formations of big countries. With the emergence of a multipolar world, we are starting to see an “almost frenetic G-activity”, including G2 (China and US), G7 and G20.

What comes to the UN reform, Stubb is an advocate of a regional representation in the UN Security Council with one seat for each continent, even if it is hard to implement the same model for Asia or South America. Secondly, we need to reform UN peacekeeping. The blue helmet is the best brand the UN has, but the peacekeeping system is overstreched and the demands are unrealistic. Thirdly, we need to work on implementing the Millennium goals. If Finland is elected to the Council, basic reform of UN institutions and peacekeeping will be part of the Finnish agenda.

In the discussion that followed the foreign minister’s speech, the veto power of permanent member states of the Council states was identified as one fundamental problem. However, it is not clear what the composition of the new council should look like. If the membership is based on economic factors, such as GDP, Africa would be excluded. Stubb suggested that a stronger United Nations would still stick to its basic charter: to promote peace, security and stability. It is difficult to transform the UN to a world government. Australia and Luxemburg where named Finland’s competitors for the UNSC membership. Stubb recognized that campaigning for the membership follows the rules of diplomacy, which is making deals with other countries.

Mr. Søren Jessen-Petersen shared the foreign minister’s strong concern on the future of the UN on global security issues. On the other hand he reminded that UN agencies are still on the frontline in humanitarian, social and economic work. He affirmed that non-permanent members are not happy to be treated as citizens of second class by the P5 countries. The P5 countries act on their national interest, forgetting their task to maintain peace and security. The Nordic countries have often been more active in evolving the global agenda to meet new security threats, such as refugee flows, humanitarian issues, infectious health diseases and environmental threats. Small states can play a role inside and outside the UNSC in mobilizing other states and non-governmental organizations to work for human security and raising human rights and accountability issues.

Dr. Michael Butler noticed that The United States is intensifying its engagement with the United Nations under the leadership of President Barack Obama and Secretary of State Hillary Clinton. Two concrete decisions reflect this new engagement: re-emphasizing the work with the UN Human rights council and the appointment of a special envoy on climate change. Suzan Rice, US embassador to the United nations, has recognized the need to expand and reform the UNSC. The goal is to maintain the council’s efficiency and the ability of countries to contribute to international peace and security. Finland has previously succesfully served in the UNSC, the EU and the OSCE presidencies, which have proved its capacity to work in the Security Council. Finland would also bring an enormous amount of expertise to the Council from its peacekeeping operations and the peace negotiations led by President Martti Ahtisaari

Ms. Marjatta Rasi noted that the agenda and working methods of the UN Security Council have changed after Finland’s previous membership in 1989–1990. There are nowadays more thematic issues on the agenda. The council has also become more transparent and Finland will actively continue this work, if elected to the Council.

Finland emphasizes the role of the UN General Assembly and the Social and Economic Council. The UN has taken an important step in reforming the Security Council. However, we have to accept some loss in the effectiveness of the Council, when it is expanded.

In the Q&A section, the public showed interest in the human rights violations of the permanent members of the UNSC, the question of Kosovo’s independence as well as the possibilities to influence the Security Council from outside the Council. Also, there were critical remarks to the model of regional representation as a Council reform: big powers would either refuse to give up their seat or continue their domination behind the disguise of regional representation. Minister Stubb disagreed and pointed out that the reform would not evidently lead to concentration of power. In answering the question on Kosovo, Mr. Søren Jessen-Petersen strongly defended the Security Council’s role to defend basic human security, when a state fails in this duty, as was the case in the crisis of Kosovo. 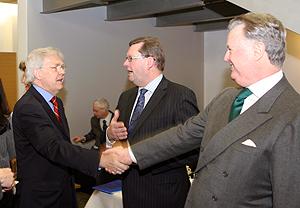 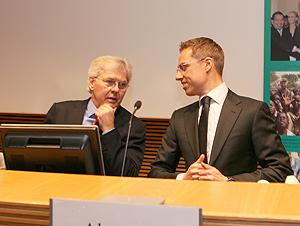 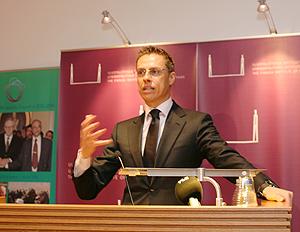 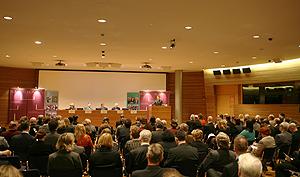 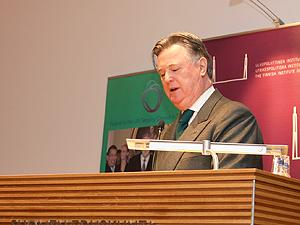 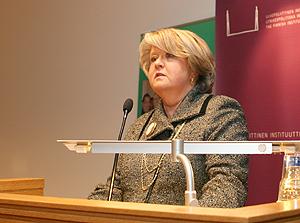