etusivu / Tapahtumat / The Russian state and the state of Russia:
jaa
jaa

This expert seminar aims to provide insight into what the Russian state currently is and how it functions internally and in the international context. The speakers discuss such core elements of the Putin-Medvedev system as the concentration of power in the hands of political and economic elite networks, and the transformation of the state institutions into the effectively “captured” instruments to advance the interests of these elite groups. The idea is to understand the nature of the system in order to assess the risks and intentions stemming from Russia’s current policies.

We would like to acknowledge the kind support of the Friedrich-Ebert-Stiftung who has made this event possible.

Professor Stephen White chaired the first session of the seminar with the subject: “The Putin-Medvedev Russia: What kind of state? What kind of policy-making?” Professor White suggested in his speech that we need a special way to look at Russia after the year 1991. At that time, there was a common trust in Russia’s transition to democracy, but this did not materialize. People began to construct qualified versions of democracy, democracy with adjectives, which was not a real democracy but something else. Now, the word ‘democracy’ is avoided. Professor White defined some distinctive features of the Putinist model. One of them is the electoral system. According to Professor White, the system in Russia is closed and excessively influenced from above. The party system is dominated by a single party and the whole system has become Kremlin-dominated. Professor White stated that 80-85 % of the citizens think that they cannot influence the government’s decisions and that the authorities do not treat ordinary people equally.

Professor Alena Ledeneva discussed the informality of the public administration in Russia. She brought up the issue of the Russian elite. She stated that research on the elite is in crisis. “We are not sure who are the elites and how do they operate.” Professor Ledeneva defined the word network and stated that networks in Russia are often informal and conducive to corrupt practices. Professor Ledeneva also defined the “sistema” that is used most commonly by political, economic and administrative elites. In her view the notion of “informality of sistema” is a puzzle. She stated that informal pressures in Russia blur the boundary between friendship and use of friendship, which means helping a friend at the expense of public or corporate resources. She said that the appointment of President Medvedev shows the continuation of a system which is based on loyalty and lacks the needed experience. In the end Professor Ledeneva pointed out three initiatives and challenges to reform the “sistema”. These are telephone justice, blat appointments and anti-corrupt legislation.

Dr Nikolay Petrov stated in his speech that under Putin’s administration centralization became a stronger development trend. He pointed out that now the system “from the top to the bottom” is more dominant. Dr Petrov also addressed the mechanical character of the system, which makes the system non-flexible. Putin has started to reconstruct the mechanism, which has weakened all the democratic institutions. Dr Petrov also stated that an expansion of management has happened in Russia, and now the centre pretends to manage everything.

In her commentary speech Dr Susan Stewart stressed the central role which risks should play in the analysis of Russian society. She stated that in order to figure out how the Russian state acts and may act we should define the risks for society. These can be e.g. economic instability, lack of transparency, and internal development.

In the Q&A session a question was made regarding that why Putin and Medvedev are so “sustainable” as leaders. Dr Petrov stated that Putin, Medvedev and their system are vulnerable and there is a lack of trust, whereas Professor Ledeneva stated that there is trust on sustainability of the “sistema” and that she is optimistic for the continuation of Putin’s and Medvedev’s alliance.

The second session of the seminar “What kind of foreign policy?” was chaired by Dr Vadim Kononenko. Dr Pavel Baev began the session by talking about Russian security policy and its military organisation. In his speech he pointed out that Russia says that it will increase the number of modern long-range aircraft, submarines and launch systems in their strategic nuclear forces and modernise the army. But actually these new systems are not in operation and the modernisation is not taking place. Dr Baev stated that Russia is lacking manpower because of the demographic realities. The target of an army of one million men army is not realistic. Dr Baev stated that today it is vital to make a realistic assessment of the global military and political situation and have a clear understanding of potential threats. Development in South Ossetia only exacerbated the need to find an urgent solution to these problems.

Professor Marie Mendras stated in her speech that Russia is getting back on its feet, but in her opinion Russia should be better governed to function more democratically. According to her Russia is now isolating itself. Relations with Europe are getting more difficult. Professor Mendras stated that the Russian society is characterised by distrust. Ordinary people do not trust the regime and do not view the future positively. She also stated that Putin has chosen a confrontational attitude. What is now happening in Russia is, according to Professor Mendras, the rewriting of the recent history. Putin is increasing control over the media and over what children will learn in the school. The rewriting of the history is dangerous, because in that way people are offered simple answers to believe in.

Professor Riitta Kosonen presented the situation in Russia from an economic point of view. She stated that Russia has grown tremendously in recent years. Now the growth has halted but there has not been a collapse like in 1998. Professor Kosonen stated that in business world there is still a strong need for informal networking. Also corruption and other similar customs are still a big problem, which has only grown. But she stated that now it is common to donate things to organizations instead of giving bribes directly to the authorities.

In his concluding remarks Professor White made linkages between the issues discussed during the day. He emphasized the importance of feedback from the practitioners and NGOs. Furthermore, Professor White emphasized the importance of rule of law in Russia, respect for both domestic and international law. This is critically important in the battle of diminishing corruption. 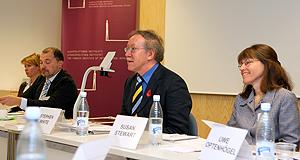 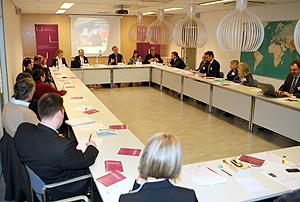 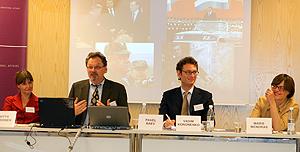 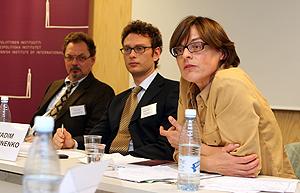 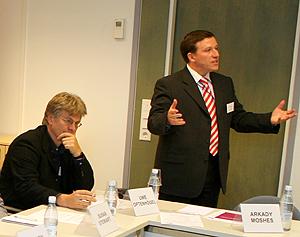 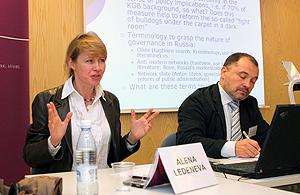