etusivu / Tapahtumat / U.S.–Finnish Cooperation in the Arctic
jaa
jaa
The Arctic region is transforming with significant geopolitical, economic, environmental and security implications. The United States is paying closer attention to these issues with the publication of key strategic documents and high profile participation in Arctic affairs. The U.S. will take over the Chairmanship of the Arctic Council in April, before passing it on to Finland in 2017. The seminar discusses the priorities of the U.S. Arctic policy with special focus on the U.S. Chairmanship Program in the Arctic Council. The seminar also discusses the current status and future of the U.S.–Finnish Arctic cooperation.
Speakers:
Robert Papp, U.S. Special Representative for the Arctic
Robert Papp is a retired United States Coast Guard admiral and served as the 24th Commandant of the U.S. Coast Guard. He led the largest component of the United States Department of Homeland Security. In 2014, U.S. Secretary of State John Kerry announced the appointment of Papp to serve as U.S. Special Representative for the Arctic.
Risto E.J. Penttilä, CEO, Finland Chamber of Commerce
Risto E. J. Penttiä is the CEO of Finland Chamber of Commerce and Secretary General of the European Business Leaders’ Convention. He receivedhis PhD in International Relations from Oxfrod University in 1989 and has worked for the World Economic Forum, Oxford Analytica and the Finnish Institute of International Affairs. Mr Penttilä is a former member of the Finnish parliament and former Director of the Finnish Business and Policy Forum (EVA).
Comments:
Harri Mikkola, Senior Research Fellow, the Finnish Institute of International Affairs
Harri Mikkola works as a Senior Research Fellow at the Finnish Institute of International Affairs. He received his PhD in Political Science from the University of Tampere in 2013. Mikkola has published several expert analyses on the Arctic region’s transformation. Prior to joining the FIIA in 2011, Mikkola worked as a Researcher at the Finnish Defence Command, at the University of Tampere, and as a Visiting Researcher at the University of Minnesota, USA.
Chair:
Teija Tiilikainen, Director, the Finnish Institute of International Affairs

Director of the Finnish Institute of International Affairs, Teija Tiilikainen, opened the seminar.

Adm. Robert Papp, U.S. Special Representative for the Arctic, emphasized the willingness of the U.S. to have a transparent agenda for the Chairmanship of the Arctic Council. Thus, he tours the member countries of the Arctic Council to get feedback about the chairmanship agenda. As Finland will take over the chairmanship after the U.S., Adm. Papp wishes to cooperate with Finland on the U.S. agenda to ensure continuity in the efforts of the Arctic Council. The main theme of the U.S. chairmanship will be ‘one Arctic, with shared opportunities and challenges, and most importantly, with shared responsibilities’. According to Adm. Papp, the U.S. will focus on three primary initiatives during its chairmanship. The first initiative concerns Arctic Ocean safety, security, and stewardship. For example, the U.S aims to enhance preparedness and response capabilities to cope with the increased risk of accidents in the Arctic. The second aim is to develop economic and living conditions of the Arctic communities by improving fresh water availability, telecommunications infrastructure, and renewable energy technology. Finally, the third initiative addresses the impacts of the climate change. Adm. Papp also stressed that when we face challenges – uncertain and stormy seas – we must face them with optimism and set the bar high, not because it is easy, but because it is hard, and hard work will bring out the best in all of us.

Dr. Risto E. J. Penttilä noted that the mood in the Arctic has changed during the last few years. Even if the business community sees potential in the Arctic, investments are on hold because of the low price of oil, economic sanctions towards Russia, and the near-collapse of Russian economy. In politics, aggressive behavior has replaced gentlemanly cooperation. Dr. Penttilä remarked that as a recent report ”Growth from the North: How can Norway, Sweden and Finland achieve sustainable growth in the Scandinavian Arctic?” stresses, the gains of cooperation could be great. That is why the communication lines with Russia should also be kept open. When it comes to the U.S. agenda for the chairmanship, Dr. Penttilä sees it as similar to the agenda of Nordic countries which stresses one regulatory framework and rules of behavior.

Senior Research Fellow Harri Mikkola remarked that even though the U.S. has been often called a reluctant Arctic state, the attention towards the Arctic has increased noticeably. Besides awareness-raising activities, the appointment of the Special Representative and the executive order of the President concerning the better inter-agency coordination of the Arctic are important steps. However, the U.S. agenda is lacking the economic and business focus that Canada has emphasized, which creates discontinuity in the work of the Arctic Council. Finland has traditionally emphasized environmental issues but also economic development and Finland will follow closely how the U.S. agenda develops and works. In addition, Dr. Mikkola thinks that the Ukraine crisis has clearly affected the cooperation in the Arctic, albeit in a limited manner.

In the discussion that followed, Adm. Papp answered the criticism about the U.S. being a reluctant Arctic power by emphasizing its will and commitment to raise awareness and achieve the goals of their agenda. He also noted that the differences between the U.S. and Canadian agendas have been greatly exaggerated.

The floor was then opened to questions, which dealt with the pause in oil drilling, practical steps to reduce black carbon emissions, the Arctic Council’s role in setting standards and the number of possible observer states in the Council. Adm. Papp noted that the pause in drilling should be used to get prepared and Dr. Penttilä added that Finland has the possibility to offer technological help to secure the drilling. Adm. Papp also told that the U.S. will look to Finland for ideas on enhancing the U.S. icebreaking capabilities. The U.S. wants to have ships that do not harm the environment of the Arctic, and he thinks that the Arctic Council must push the Polar Code further. The U.S. will tackle the carbon emissions on two levels: the micro-level of small communities’ diesel oil use, and the macro-level of possible observer states’ emissions. Dr. Penttilä and Dr. Mikkola also emphasized the role of the Arctic Council as intellectual leader and producer of scientific knowledge. A comment from the audience added that Finland should put its experience of training in the cold climate to practice because that would also secure sustainable growth in the Arctic. 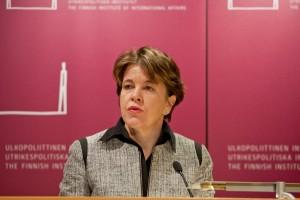 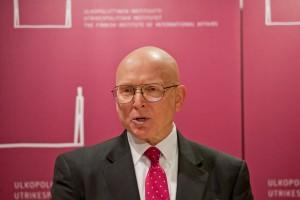 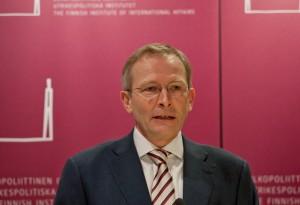 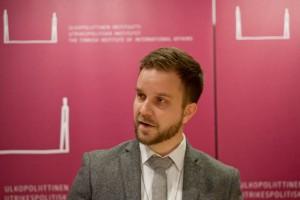