J. D. Gordon is the former Defense Department spokesman for the Western Hemisphere in the Office of the Secretary of Defense, serving under both Secretary Donald Rumsfeld and Secretary Robert Gates from 2005 to 2009, and is a retired Navy Commander. Gordon also served as the Vice President, Communications and Chief Foreign Policy & National Security Adviser to former Republican Presidential Candidate Herman Cain’s 2012 campaign. Gordon holds an M.A. in Diplomacy from Norwich University, a certificate from the Program on Negotiation at Harvard Law School, and is a graduate of the U.S. Air Force’s Air Command and Staff College.

Robert Nurick is a Senior Research Fellow at FIIA’s Center for US Politics and Power. He is also a Nonresident Senior Fellow at the Atlantic Council’s Brent Scowcroft Center on International Security. His previous experience includes serving as director of the Carnegie Moscow Center and as Senior Political Scientist at the RAND Corporation. His principal research interests are focused on the interrelationships between domestic politics and security policies in Russia, Ukraine, the Baltic states, and Central Asia; on NATO reform and its impact on evolving security arrangements in Europe; on Russian-American relations; and on arms control and nuclear non-proliferation.

Programme Director Mika Aaltola from the Finnish Institute of International Affairs opened the seminar. He remarked that the U.S. national security policy has always been seen to be at crossroads, but the recent situation is somewhat different from the past because the leadership has become a key issue. U.S. faces a continuous stream of challenges and the national security policy must be up-dated constantly.

J. D. Gordon, Senior Fellow from the Center for a Secure Free Society, addressed U.S. national security policy’s strengths and influences through historical debate between isolationism versus interventionism. Reasons for such a debate lie in the dichotomic nature of U.S. political system. Two-party system, division between idealist and realist viewpoints, and the rotation of policymakers through elections make constant changes in policies possible. The pendulum has swung back and forth between isolationism and interventionism since the early days of the nation. Weaker stance in the world stage, driven by isolationism, has resulted in various foreign and national security policy failures, as the Iranian hostage crisis in the 70s, and the rise of assertive Russia lately. American isolationism has created power vacuums that have helped dictators to gain strength. U.S. has been dragged into conflicts sometimes reluctantly, and war weariness in the homeland has always swung the pendulum back from interventionism to isolationism. The Vietnam War illustrated, that the war can be won by winning the public opinion for one’s favor. Propaganda wars have since then been fought against the U.S., for example in the case of Guantanamo. President Obama’s policies and the cuts in the defence budget pose serious challenges to U.S. power, and the national security policy pendulum is currently favoring isolationism. However, crisis in Ukraine, Islamic State in Iraq and Syria, and Iran’s nuclear weapons programme continue to threat the freedom of the world.

Senior Research Fellow at the FIIA, Robert Nurick, analyzed the effects of the 2014 mid-term elections to the U.S. national security policy. He noted that the impact of elections is often interpreted wrong and predicting the future is difficult. He expects that Republican victory may bring forth tougher policies against Russia. Nature of the sanctions and conditions for loosening them, as well as supporting Ukraine with lethal aid continues to divide the Congress. Ukraine needs effectively functioning political system and sustainable economic basis, and rebuilding its military capacities will take time and resources. Lethal aid must be considered even the opponents of lethal aid claim for example, that lethal aid might end up into wrong hands, and it can bring about further escalation. However, Ukraine already has competent units and reasonable ground for equipment to prevent lethal aid getting into the wrong hands, and while lethal aid might further the escalation, Russia will find reasons to do that anyway if it wants. Congress has a considerable consensus in broad terms over Putin’s acts, and has leverage over foreign and national security issues because it controls the purse. Presidential veto might be costly to use as the Republicans will try to push presidential leadership issues before the 2016 Presidential elections.

In his comments, Mika Aaltola emphasized the external reality and unexpected events that constrain the national security policy. In addition, domestic realities sometimes limit the room for maneuver. The divisions do not only follow the party lines, but they can be found inside parties too. For example within the Republican Party, the neo-Reaganites would want to strengthen U.S. military and minimize the defence cuts, while the Tea Party members and libertarians would want to decrease U.S. engagement abroad. Aaltola also noted, that in spite of partisanship, Americans have had tendency to develop common sense.

The floor was opened for questions. The first question concerned limited capacities of U.S. Gordon noted that to be able to project the power, U.S. has to fix the problem with its spending. Nurick agreed on budget constraints, and emphasized the need for a fundamental change in the long run. Defence budgets have been high while the funding for foreign service and aid has decreased. However, the problems can only be solved with combining these measures. Other questions addressed the importance of network of alliances to U.S., the possible Republican candidate in the up-coming Presidential elections, and whether the recent change of the Secretary of Defence would change defence policies. Nurick emphasized the importance to enhance the capacities of allies in order to take more responsibility in their neighborhoods. No predictions were made about the Republican presidential candidate, and both agreed that no big changes were about to happen in the defence policy. 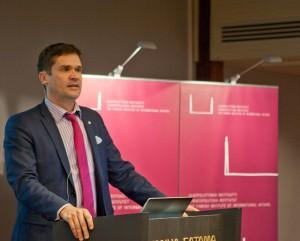 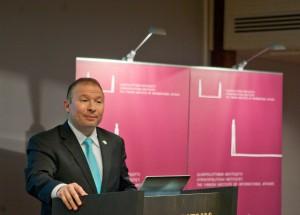 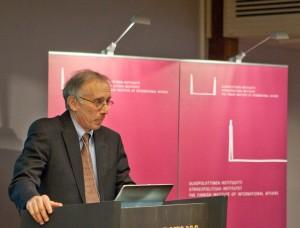