The experienced paralysis of government or gridlock in Washington has resulted to a sense of inaction. The system of separation of powers and the checks and balances provide a different setting for the executive-legislative relations than in the parliamentary system of governments. This year’s midterm elections have raised debates on whether the Republicans will gain the majority of the Senate, and on what kind of implications the election outcome would have on the rest of the Obama’s presidency and the legislative agenda. The Roundtable will address these issues from the perspective of the US political system, Congress and the nature of general elections.

Dr. Miller is professor of American politics at Clark University in Worcester, Massachusetts, and former chair of the Department of Political Science. He is also the Director of the Law and Society Program there and the university pre-law advisor. He received his Ph.D. from the Ohio State University and his J.D. from George Washington University. He served as the Judicial Fellow at the Supreme Court of the United States from 1999-2000, and he was a Congressional Fellow in 1995.During 2006-07, he was a Visiting Scholar at the Centennial Center for Public Policy of the American Political Science Association. For the academic year 2014-15, he is serving as the Distinguished Fulbright Bicentennial Chair in North American Studies at the University of Helsinki.

The seminar was opened by Dr. Mika Aaltola, who emphasized the effect of the midterm elections to various political issues, including negotiations on Iran’s nuclear program. Dr. Timothy Nokken continued by analyzing the possible post-election situation. He noted that the Republicans are likely to gain more seats in the Senate and it is common that the party of the president loses seats in the midterm elections. The Congress has been highly polarized along partisan lines and the parties have had very little common ground in policy matters. Even though the majority in the Senate is given a lot of power, the victory of the Republicans would not make a big change. Dr. Nokken presented statistics of recent predictions, which illustrated for example the states that the Democrats might lose in the coming elections. If moderate Democrats were to be replaced with average Republicans, the Senate would witness a significant shift to the right. A Lame-Duck Session will probably follow the elections, meaning that until the successor’s term begins, the losing members are still eligible to participate in congressional work. If the Republicans were to win, they first need to find a common agenda within their own party. Congressional Republicans will face three issues – the repeal of Obamacare, budget and spending, and immigration. These issues do not only separate the Republicans from the Democrats, but they divide the party from inside. Even if the Republicans were able to agree, they would still be faced with the veto-right of the President and the filibuster practices of the Democrats.

Dr. Mark C. Miller remarked that because the election laws differ in each state, we may not know until January 2015 who will control the Senate. Different election procedures and technical matters complicate the prediction of the results. Voter turnout in the midterm elections is only 35% at its best, which is notably less than the 55% turnout in Presidential elections. Generally a big voter turnout has benefitted the Democrats. Dr. Miller thinks a Republican Senate would mean another ”do-nothing Congress” and a move towards a new gridlock. In the case of a Lame-Duck session, the Democrats might try to push through Obama’s ambassador nominees as well as the nominees to the federal courts. Many public policy decisions, including e.g. same-sex marriage, are made in courts, and the terms of the judges are life-long. The Supreme Court nominees can be filibustered, but in 2013 the Senate rules were changed so that the nominees to the lower courts cannot be filibustered anymore. Should Republicans have the majority in the Senate after the elections, Obama would certainly use the Presidential veto and executive orders. Even if the Congress can pass legislation to overcome his executive order, Obama can veto that too. However, what matters the most in Congress is, that every politician is going to calculate their actions’ effects to the next elections.

After the presentations, Dr. Aaltola opened the floor to questions. The following debate dealt with the questions regarding the independent candidates and the divisions within the GOP. Dr Nokken noted that the public does not trust the independents because they will usually ally with whoever wins the election. Dr Miller pointed out also that the electoral laws favor the two party system. Regarding the division within the Republicans, the Tea Party is unlikely to separate from the GOP because its main task is to oppose everything coming from the federal level, not to govern. The ongoing TTIP negotiations with the US brought up a question about the future of the trade agreements, should the Republicans win. Dr. Nokken remarked that the Republicans in Congress can find a common ground with the President in trade issues, even though the budget will divide the parties deeply. Further questions were raised on the Republican’s efforts to mobilize their voters, the effect of the ID-laws to voting, as well as the financial help to Ukraine, and the change in the attitudes of Congressional authority in war-making. Republican voters tend to be conservative and disconnected with technology, compared to Democrat voters, said Dr. Nokken. Dr. Miller noted, that different and confusing ID-laws can decrease the voter turnout and thus benefit the Republicans. When it comes to the Ukraine crisis, Dr. Miller said that Republicans will be divided between those, who want a tougher policy towards Putin, and Tea Party members who favor isolationism. Republicans are not going to repeal the War-Powers Act, and both parties are hesitant to send more troops abroad. 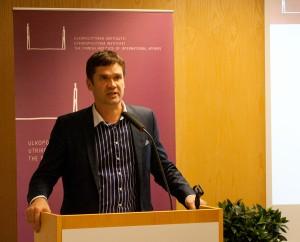 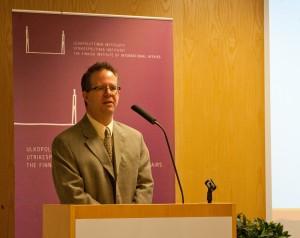 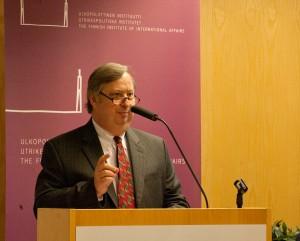