The economic crisis and its heavy social costs in some member states have created new dividing lines in the European Union. Different understandings of solidarity and ways to deal with the crisis are testing the Union’s internal cohesion. There have been shifts in the balance between the EU institutions and member states, and among the institutions. In this difficult context, how can the EU generate a new shared vision of the way forward? Is the institutional framework fit to address the challenges and reinforce unity?

Brigid Laffan is Director and Professor at the Robert Schuman Centre for Advanced Studies, and Director of the Global Governance Programme, European University Institute (EUI), Florence. She was Vice-President of UCD and Principal of the College of Human Sciences from 2004 to 2011. She was the founding director of the Dublin European Institute UCD from 1999 and in March 2004 she was elected as a member of the Royal Irish Academy. She is a member of the Board of the Mary Robinson Foundation for Climate Justice, the Fulbright Commission (until September 2013) and was Visiting Scientist for the EXACT Marie Curie Network.

Richard Corbett is a Member of the European Parliament for the British Labour Party. He was first elected in 1996 and since 1999, he has represented the region of Yorkshire and the Humber. He is the Deputy Leader of the Labour MEPs. Between January 2010 and February 2014, Corbett was an advisor to the first full-time and President of the European Council, Herman Van Rompuy. In this capacity, and as a frequent writer and commentator on European affairs, he was voted by a panel of retired diplomats, journalists, academics and think-tankers on 14 November 2012 as the fourth most influential Briton on EU policy, ahead of the Prime Minister, the Chancellor and Commission Vice President Baroness Ashton.

The seminar was opened with some introductory remarks by the director of the institute Teija Tiilikainen. While many of the events of the Finnish Institute of International Affairs are devoted to external challenges to the EU, it is nonetheless important to focus also on the internal developments of the Union. The seminar thus provided a timely opportunity to look at the state of the Political Union in Europe. We are not yet in the aftermath of the financial crisis in the EU, but it is possible to reflect on its current state. The newly formed European Parliament and the change of the leadership of EU institutions also form the background of the seminar’s discussions.

Brigid Laffan, Director and Professor at the Robert Schuman Centre for Advanced Studies and Director of the Global Governance Programme at the European University Institute in Florence, focused in her presentation on the structural features and challenges of the Political Union. The financial crisis and an increasing Eurosceptic public pose a serious challenge to the EU. Two tensions characterise the current structure of the Union. First, the EU is very strong on technocratic and expert-centered issues, while being weak on politics. The risk is a potential disconnect, as every technocracy has to be rooted in a system of democratic politics. Second, there is a tension between the ‘Brussels beltway’ and the domestic level in member states. The policy-making in the Brussels beltway is running more or less smoothly despite the favourable outcome for EU-skeptical parties in the European Parliament elections. The Council and the European Parliament are deciding by supermajorities and are led by grand coalitions. Thus, Eurosceptic movements challenge EU politics rather on a domestic member-state level.

The politicisation of the EU is not a new phenomenon, but rather an underlying structural phenomenon as the EU is unbundling the nation state which used to align territory, identity and functions in one entity. Yet, while the problem was always structural, “the crisis brings politics back with a bang”, Brigid Laffan argued. Cleavages between the left and right, the pro- and anti-EU, as well as core and periphery countries are highlighted across Europe. Thereby two distinct narratives have developed. One narrative highlights ‘solidarity’ and ‘fairness’, and is especially used by proponents of new systems for debt-mutualisation or cross-border transfers. The other narrative advocates ‘responsibility’ and highlights the need of member states to implement reforms and adhere to the common rules.  The cleavages across Europe made especially incumbent governments and mainstream political parties extremely volatile as they gave rise to populist argumentation and allegedly simple solutions.

In order to generate political unity, the EU has to improve its performance and increase its “output legitimacy”. An important role falls to Europe’s elites. They have to bring the EU partners into the domestic debates of their member states, exemplify political leadership which is representing a “politics of choice” rather than a politics of single solutions and hence confront the populist movements in their home countries. The institutional setup, which was put into place with the Lisbon Treaty, is not a matter of concern. The EU is bound to remain a sui generis construct, neither a federal system of nation states nor a mere international organisation. However, in order to be credible and effective the EU has to move from a system of “multi-level governance” to a system of “multi-level politics”.

Richard Corbett, a Member of the European Parliament for the British Labour Party, started his presentation by reflecting on the term “Political Union” which in his eyes in insufficiently defined: after all, we already have a Union and it is political. The issue is therefore whether changes to the competences or powers of EU institutions are needed. The Lisbon Treaty ended years of negotiation on that and few people are ready to re-open that soon.  The scope for deepening within the existing treaties is now larger, and those changes that cannot be done without treaty change are ones where there is anyway no consensus, such as mechanisms for debt-mutualisation or extended qualified majority voting on foreign policy matters.

Instead, the thread of disintegration has to be tackled first. There is a wider malaise and two immediate threats emanating from Greece and the UK. He was hopeful that the current discussions with the newly elected Greek government might reach a positive end – the Greek government was adamant that it wanted to stay in the euro and the EU – but there is a danger of brinkmanship in the talks, and other governments have little political margin of maneuver, given that Greece already had two bailout loans and a debt write-off. The tragedy is that Greece seemed to have turned the corner, with growth returning in recent months. The country’s economy can profit from the low oil price, and its newly elected government has showed a tougher stance on tax evasion.

He is however worried about the UK Conservative Party’s announcement to hold an EU referendum if it wins the election.  Cameron’s strategy would be amount to two rounds of blackmail. First, other EU member states would be asked to make concessions that they would not normally give, under threat that the UK would otherwise leave the Union. Second, British voters would be offered only a choice between accepting Cameron’s “renegotiated EU” or leaving the EU. The risk is high that this strategy might lead to Britain accidentally leaving the EU (“accidental Brexit”.), as Cameron would have to initially make brexit seem credible and then later argue that it is not.

Despite tensions, there are also some glues that keep the EU together, argued Richard Corbett. Member states are highly interdependent, face the same external challenges and share a powerful common market. Where there are internal disagreements, they do not divide the continent into two opposing unitary blocs. Rather, it divides into a variety of different coalitions depending on the issue. The European Parliament is a healthy institution for the EU system, as its members do not sit or divide according to nationality, but according to political standpoints. This takes the edge off national disagreements and also increases the pluralism of the EU decision taking

Hanna Ojanen, Jean Monnet Professor at the University of Tampere, discussed in her comments the different roads out of the crisis. Everyone recognises that we are interdependent. Even those who are favoring a disintegration of the EU, have to realise that this cannot only mean that the system is reversed to a pre-EU status. The question, what “more-” or “less Europe” would actually mean, has thus to be addressed in more detail. An important question is which actors actually have the agency to overcome the current divisions. Some experts see this role clearly in the hand of national politicians. But who takes the initiative, if we do not have national politicians who can act? What role can the common institutions play?

These and other questions were discussed in the QA session. Some participants expressed the crucial role of national politicians to increase the legitimacy and efficiency of the EU. Member states are still the main source of agency in the EU system. However, rather than seeing the EU as a zero-sum-game, where national politicians want to “win in Brussels”, the focus should be on solutions that are beneficial for all EU partners. Also the crucial role of EU institutions was mentioned. The Commission can help the member states to think more in the long-term on issues like climate change and is an integral part of the whole EU system. The reforms of Jean-Claude Juncker that divided the College of Commissioner into different thematic clusters are to be welcomed. Yet, the sudden appearance of the financial crisis in 2008 and the quickly worsening relations with Russia in 2014 show that the system still needs a capacity for a more forward-looking and strategic assessment. All panelists agreed that the state of the political union is bound to remain an important topic in the years to come. While the final outcome of the current crisis of the EU cannot yet be fully estimated, it remains clear that the “EU will remain part of the fabric of this continent”. 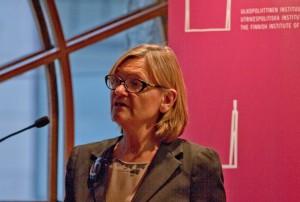 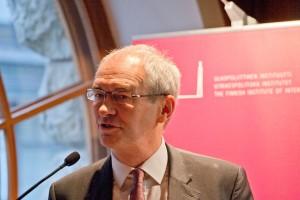 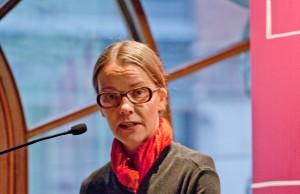 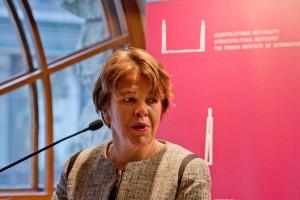 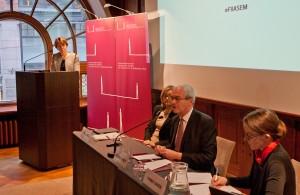 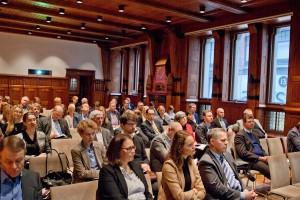