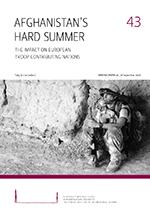 The increase in fighting in the summer of 2009 has led to renewed debate in many of the countries contributing troops to the international mission in Afghanistan.

In the UK the heavy loss of life amongst British soldiers has been central to the discussion on Britain’s continued contribution.

In Germany the debate has more focused on the increasingly offensive actions that the Bundeswehr is undertaking.

France’s contribution to the Afghanistan mission is less politically controversial than in other European countries because of the president’s power over foreign and security policy.

For many years Italy’s Afghanistan contribution was less politically sensitive compared to the Italian presence in Iraq, but this is changing with the increase in violence in Afghanistan.

In Sweden the annual parliamentary approval process and the increased expeditionary focus of the armed forces have lead to a strong consensus on the need to participate in Afghanistan.

The debate in Finland is sporadic and reactive as there is not an annual parliamentary debate as is the case in Sweden and Germany. Nevertheless Finland’s contribution is centrally linked to the decision made in those countries.